Both leaders were committed to building stronger ties 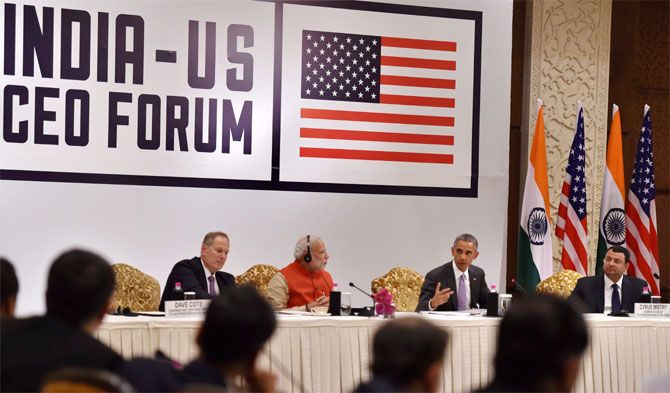 US President Barack Obama ended a landmark day in India on Monday with a pledge of $4 billion in investments and loans, seeking to release what he called the "untapped potential" of a business and strategic partnership between the world's largest democracies.

The leaders talked on first name terms, recorded a radio programme together and spent hours speaking at different events, but despite the bonhomie, Obama and Modi reminded business leaders that trade ties were still fragile.

India only accounts for 2 per cent of US imports and one percent of its exports, Obama said. While annual bilateral trade had reached $100 billion, that is less than a fifth of US trade with India's neighbour, China.

The United States views India as a vast market and potential counterweight in Asia to a more assertive China, but has frequently been frustrated with the slow pace of New Delhi's economic reforms and unwillingness to side with Washington in international affairs.

That may be changing under Modi, who has injected a new vitality into the economy and foreign relations since his May elections, and to Washington's delight, has begun pushing back against China across Asia.

India could even play a role in battling Islamic State, the White House said on Monday, underlining confidence that India is increasingly prepared to engage on global security issues.

US can  help in digitalising Jan Dhan accounts

US to partner India in solar energy and sustainable energy solutions

Will earmark $4 billion in investment and lending deals to India

Exim Bank of US to commit $1 billion for project financing

Only 1% of American exports go to India, a nation of a billion-plus people. We do trade worth $100 billion with India, But with China we do $560 billion

The global fortunes of the US, India are interlinked

In the last three years, we have increased our trade by 60%, today it is worth $100 billion

Growth cannot be measured by GDP alone, it has to be inclusive and improve the lives of people

We are forging ahead in areas of civil nuclear energy, renewable energy and defence

We will protect your intellectual property rights, nurture innovation

You will find an open environment, we will guide you and walk with you in your projects (assuring CEOs of American firms)

Some of the pledges made in Washington in September have begun to flow in, I do keep track of these things

Today business sentiments in India are the strongest among Asian markets

For India, the journey has been impressive but the road ahead is still long