Earlier, while presenting the Budget on February 1, Finance Minister Arun Jaitley had proposed to cap cash transactions at Rs 300,000 with effect from April 1. 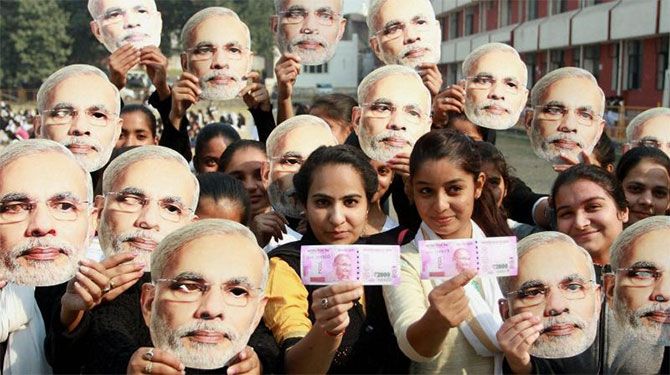 The government on Tuesday proposed to lower the cash transaction limit to Rs 200,000, from Rs 300,000 announced in the Budget, as it introduced 40 amendments to the Finance Bill in an unprecedented move.

As the Finance Bill was taken up for consideration in the Lok Sabha, the opposition parties including Trinamool Congress, Biju Janata Dal and Revolutionary Socialist Party protested against the introduction of these many amendments, saying it was being done as a "back-door entry".

Lok Sabha Speaker Sumitra Mahajan, however, overruled the objections raised by the opposition parties, saying the 'incidental provisions' involved in the amendments constitute a 'Money Bill' and therefore can be considered as part of the Finance Bill.

The proposed amendments to the Finance Bill include a provision to cap legal cash transactions at Rs 200,000. While presenting the Budget on February 1, Finance Minister Arun Jaitley had proposed to make any cash transaction beyond Rs 300,000 as illegal with effect from April this year.

A penalty of equal amount would be levied in case of any violation of the provision, Revenue Secretary Hasmukh Adhia tweeted after the amendment was moved.

Another senior revenue department official said the move was intended to make the law more stringent to clamp down on cash dealings, which was giving rise to black money.

The move to cap legal cash transactions followed recommendations made by the Special Investigation Team on Black Money, which was set by by the government on directions of the Supreme Court.

The amendments to the laws like Companies Act, Employees Provident Fund, Smuggling and Foreign Exchange Act, TRAI Act and Information Technology Act, have also been moved to make the functioning of tribunals more efficient by merging the smaller ones and reducing their numbers from 40 to 12.

He said if a substantial portion of a bill deals with imposition or abolition of tax, it can be introduced as a Money Bill even even if it has other incidental provisions.

"You cannot have a bill which says government will spend Rs 100,000 crore (Rs 1,000 billion) without detailing how it would be spent.

You cannot have a bill where you say there will be 5 per cent without specifying what will be the deduction, what will be the power of assessing officer, appeal provision... No tax can be imposed without reference to courts or tribunals.. These are incidental provisions...," Jaitley said.

The minister said the Opposition's objection is borne out the language in Article 110(1) and ever since the inception, the House has been debating on the word 'only' used there.

As Jaitley moved the Finance Bill for discussion, N K Premanchandran (RSP) said the government is pushing the amendments to the House and not following the rules.

"It is being bulldozed... If you conduct the House like this, then there is no need for the Monsoon and the Winter sessions... (Parliamentary) Standing Committee can be curtailed. The supreme right of Parliament is being taken away," Premachandran said.

The government is bringing amendments to the Representation of People Act, the RBI Act and the Sebi Act, he observed, while adding, "How can the issue of electoral bond come under Finance Bill? These amendments do not come under the purview of the Finance Bill."

Jaitley said the electoral bond has been proposed for cleansing the political money since a lot of electoral funding, across the spectrum, comes from unknown sources.

Jaitley said at present the Representation of the People Act provides for revealing of identity of people making donations above Rs 20,000 and the amendment would provide that if money comes by way of electoral bonds, the identity will not be disclosed.

The finance minister also said the amendments proposed in the Post Office Act, the Oil Industry Development Act and the Research and Development cess can be made part of the Finance Bill as these squarely come within the purview of Article 110.

Deepender Hooda of Congress said the government should have brought a separate bill on transparency in electoral funding as amendment to the RBI Act was 'consequential' and not 'incidental'.