Ahead of RBI's second bi-monthly monetary policy review, Finance Minister Arun Jaitley on Sunday said his "expectation" from Governor Raghuram Rajan was the same as general expectation on an interest rate cut.

"My expectation is the same as your expectation," he said when asked about what he expected the RBI to do in the June 2 policy review.

"I expect what you expect," when he was told during an interview with PTI that the expectation was of a rate cut by the RBI.

The RBI has lowered its policy rate twice so far in 2015, but maintained a status quo in its first bi-monthly monetary policy released on April 7 on fears of unseasonal rains impacting food prices.

The repo rate, at which the RBI lends to the banking system, currently stands at 7.5 per cent and the cash reserve ratio, which is the amount of deposits parked with the central bank, is 4 per cent.

According to analysts, the mix of slowing inflation and weaker-than-expected growth are indicating that a policy rate cut is on the anvil.

While a rate cut on or before June 2 is most likely, beyond that, room for additional rate cuts depend on structural reforms that the government undertakes.

However, there is a risk factor of monsoon being lower than the average affecting the crop production. Retail inflation eased to a four-month low of 4.87 per cent in April while industrial output slowed to a five-month low of 2.1 per cent in March.

At wholesale level, the deflationary pressure has persisted for the sixth month in a row and fall in prices of fuel and manufactured items pulled WPI inflation to a new low of (-)2.65 per cent in April.

"We are penciling in a 25 bps repo rate cut by RBI on June 2 or even before that," SBI said in a research note.

According to experts, the next round of rate cut may now be driven more by growth considerations, as inflationary momentum is likely to remain subdued.

"We are convinced that retail inflation trajectory will be significantly benign on the back of a loss of purchasing power in rural economy," SBI said adding that "if inflation numbers stay below 5 per cent, there is an outside chance of an additional 0.25 per cent cut".

Get Rediff News delivered into your Inbox.
Source: PTI© Copyright 2020 PTI. All rights reserved. Republication or redistribution of PTI content, including by framing or similar means, is expressly prohibited without the prior written consent.
Related News: RBI, SBI, Raghuram Rajan, WPI, PTI
SHARE THIS STORY
Print this article 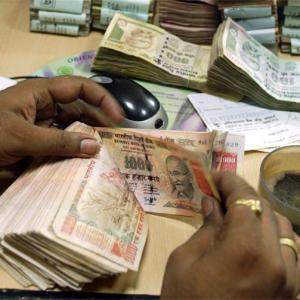