Only one of the three drivers of the economy has performed in the way it should: government spending grew at 15.6 per cent, reports Abhishek Waghmare.

The National Statistics Office data paints a grim picture of the economy.

Nominal growth in the economy slumped to a multi-decade low of 6.1 per cent in Q2 FY20.

It had stood its ground even in the aftermath of demonetisation and the goods and services tax (GST) roll-out (Chart 1). 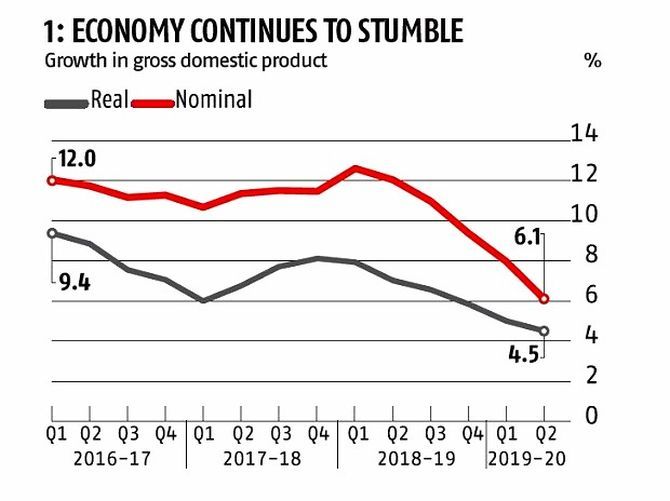 Gross value added (GVA) in manufacturing contracted by 1 per cent, both in nominal and real terms, with the former shrinking faster (Chart 2). This represents a deflationary situation in the industry, and shows that demand has weakened further.

In fact, the share of manufacturing in GVA is now receding, in comparison to pre-demonetisation quarters.

As for the farm sector, this quarter continued the streak of stagnation, though prices seemed to have elevated recently (Chart 3), with higher nominal growth. Farm incomes are rising, but output is not expanding.

Among services, two major sectors--trade and finance--which account for nearly half of the GVA in services in the economy, has grown at 6.3 per cent nominally (Chart 4), and at 5.4 per cent in real terms, indicating a collapse of pricing power. As a result, only one of the three drivers of the economy has performed in the way it should: government spending grew at 15.6 per cent.

Investments are stagnant, growing 1 per cent in comparison to that in the previous year (Chart 5). Consumer spending is growing slower than normal at 5 per cent (Chart 6).