Severe sluggishness in demand in Europe hit India's merchandise exports, which fell for the third consecutive month this financial year. Compared with $26.3 billion in the corresponding period last year, exports fell 14.8 per cent to $22.4 billion in July. This was the steepest fall in 35 months (exports had declined 23.59 per cent in August 2009). 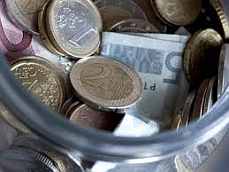 Imports, too, contracted for the third consecutive month, falling 7.78 per cent to $37.9 billion, against $41.1 billion in July last year. Crude oil imports fell 5.52 per cent to $12.22 billion, while non-oil imports declined 8.57 per cent to $25.70 billion, indicating a sluggish industrial scenario in the domestic economy.

"Contraction in this segment (imports) points to a slowdown in industrial activity, as it indicates a fall in consumption expenditure, as well as imports that are export-linked," said D K Joshi, chief economist, CRISIL.

As the fall in exports was more than that in imports, the trade deficit widened to $15.5 billion in July, against $11.08

Joshi said it would be difficult to meet the Commerce Department's target of $360 billion of exports this financial year. Rao, too, had said meeting the target would be difficult, though not impossible.
BS Reporter in New Delhi
Source: