The internals of the food inflation are worrying, given a broad-based uptick across categories that tend to be sticky, such as proteins, and a narrower-than-expected reduction in inflation for vegetables. 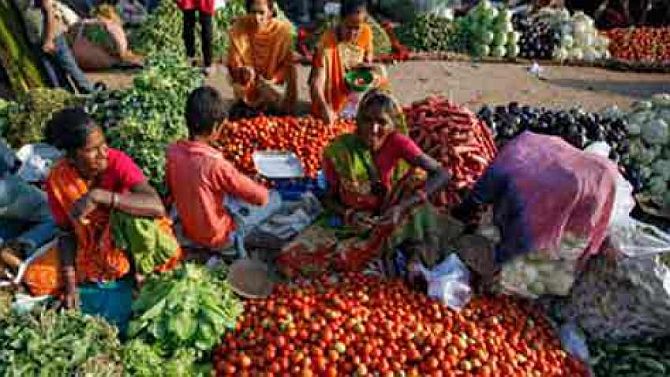 Retail inflation jumped to over five-and-a-half-year high of 7.59 per cent in January on persistently high prices of vegetables, pulses and protein-rich meat and fish, government data showed on Wednesday.

The earlier high was in May 2014 when the CPI-based inflation was 8.33 per cent.

The overall food inflation during January this year stood at 13.63 per cent, slightly lower than 14.19 per cent in the previous month, showed the data released by the National Statistical Office under the Ministry of Statistics and Programme Implementation.

Inflation in vegetables spurt to 50.19 per cent in January this year, while that for pulses and products, it rose to 16.71 per cent.

Among protein-rich items, prices of meat and fish went up by 10.50 per cent during the month, while egg prices were higher by 10.41 per cent against the year-ago period.

The food and beverages category showed an inflation print of 11.79 per cent, according to the data. 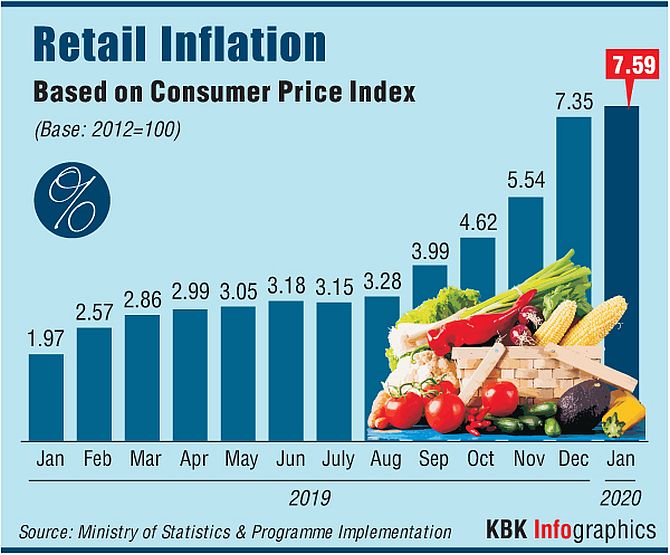 Housing turned costlier by 4.20 per cent in January 2020, while for fuel and light, the inflation print was 3.66 per cent.

"The internals of the food inflation are worrying, given a broad-based uptick across categories that tend to be sticky, such as proteins, and a narrower-than-expected reduction in inflation for vegetables.

"Moreover, the fairly broad-based rise in the core inflation to 4.1 per cent in January 2020, driven by various services, is a cause for concern," said Aditi Nayar, principal economist, ICRA.

Nayar added that regardless of the level of retail inflation, the stance of the RBI for the monetary policy is likely to be retained as accommodative, for as long as the MPC considers the output gap to be negative.

"The timing and magnitude of the next rate cut will depend on how quickly inflation appears to be reverting back towards 4 per cent." 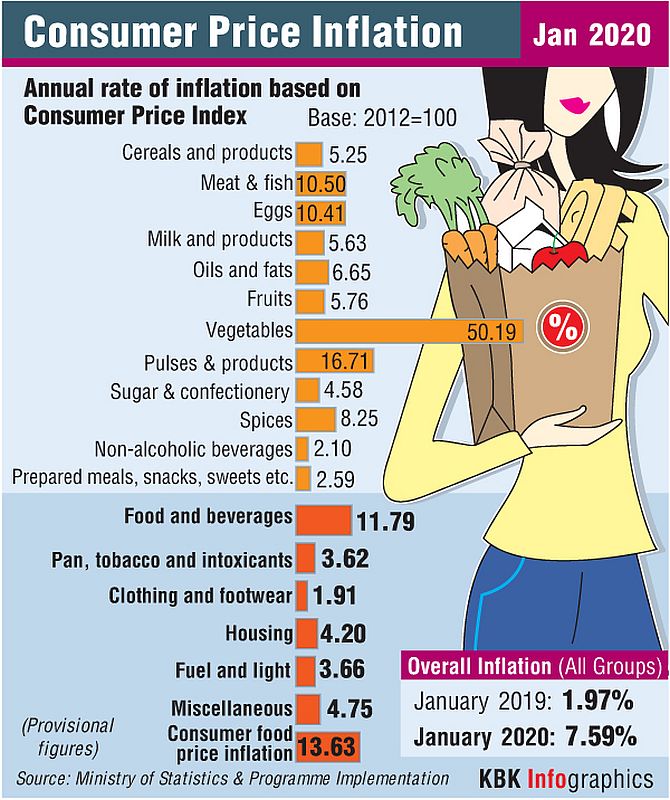 Rahul Gupta, head of research (currency), Emkay Global Financial Services, said, "It is the consecutive second month that the CPI has breached upper band of the RBI's inflation target... if inflation continues to hover above 6 per cent, we don't expect the RBI (Reserve Bank of India) to cut interest rate or change its accommodative policy stance," said.

The Index of Industrial Production (IIP) had grown by 2.5 per cent in December 2018.

According to the National Statistical Office (NSO) data, manufacturing sector output declined by 1.2 per cent compared to growth of 2.9 per cent in the same month a year ago.

Electricity generation also dipped 0.1 per cent as against a growth of 4.5 per cent in December 2018.

Mining sector output grew by 5.4 per cent, compared to a contraction of 1 per cent earlier.

The IIP growth during April-December period of the current fiscal decelerated to 0.5 per cent from 4.7 per cent expansion in the same period of 2018-19.

Factory output, as measured in terms of the Index of Industrial Production (IIP), had recorded a growth of 2.5 per cent in December 2018.

Industrial production growth had turned positive at 1.8 per cent in November last year after contracting for three consecutive months of August (-1.4 per cent), September (-4.6 per cent) and October (-4 per cent).

According to the National Statistical Office (NSO) data, the manufacturing sector output contracted by 1.2 per cent in December 2019 as against a growth 2.9 per cent in the same month last year.

Electricity generation also fell by 0.1 per cent as against a growth of 4.5 per cent in December 2018.

IIP growth during April-December period of the current fiscal came in at 0.5 per cent, down from 4.7 per cent in the same period of 2018-19. 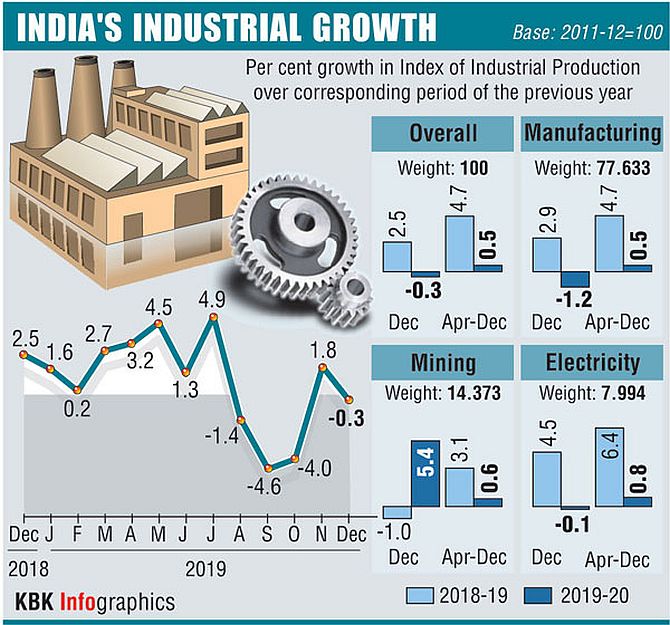 Data for the December month further revealed that production of capital goods, a barometer of investment, slumped by 18.2 per cent compared to a growth of 4.2 per cent in the corresponding month of the previous year.

Consumer durables and non-durables recorded growth of (-) 6.7 per cent and (-) 3.7 per cent respectively.

In terms of industries, 16 out of the 23 industry groups in the manufacturing sector have shown negative growth during December 2019 as compared to the corresponding month of the previous year.

Commenting on the IIP data, Rumki Majumdar, economist, Deloitte India, said, "The contraction in the IIP in December raises concerns about the sustainability of the green shoots in industrial activities that were visible till last month.

“This does not bode well for the overall economy as global headwinds already pose significant challenges to overall industries."

"The large outbreak of the coronavirus in China can adversely impact India as China is one of the largest trading partners.

“With several factories being closed down in China temporarily, the electronics and auto industry in India will likely be hit because of their dependence on Chinese imports of components and raw materials," Majumdar added. 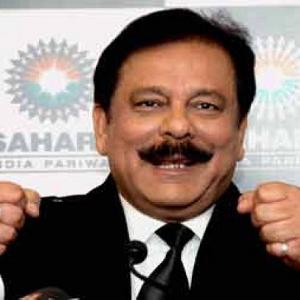