In order to make it hassle-free, various start-up support groups such as TiE (The Indus Entrepreneur) and India Angel Network (IAN) are partnering with the digital NBFCs to extend debt finance to their member companies.

At a time when the start-up segment in the country is undergoing liquidity crisis owing to business disruptions caused by the Covid-9 pandemic, new age digital lenders are attempting to help them with debt financing.

In order to make it hassle-free, various start-up support groups such as TiE (The Indus Entrepreneur) and India Angel Network (IAN) are partnering with the digital NBFCs to extend debt finance to their member companies.

IAN for example, has tied up with digital lender Indifi Technologies to avail growth-debt capital to its portfolio start-ups. Similarly, SaaSBOOMi, another support community for around 700 Software as a Service (SaaS) start-ups across the country, had partnered with non-banking lenders such as KredX, Getvantage and Indifi to help its member meet their immediate working capital needs.

But how is this different from the lending made by digital lenders in the normal course of business for micro, small and medium enterprises (MSMEs)?

The early-stage start-ups were lent on these "innovative criteria" and not the usual profitability metrics it considers for MSME lending. "Many of these start-ups may not be even profitable (at present)," said Mittal.

The start-ups can avail collateral-free debt in the range of Rs 10 lakh to Rs 2 crore while loan repayment duration will range between 18 to 36 months.

This comes as start-ups are facing liquidity crunch due to an unforeseen situation that forced the entire country to be under lockdown for over two months.

"We saw venture capital funding slow down during the pandemic and SaaS companies are a relatively better position due to their recurring revenue," said Manav Garg, co-founder of EKA Software Solutions and is part of the team that conceptualised the initiative at SaaSBOOMi. "Digital lenders also get a value proposition for the loans or working capital extended under this model."

SaaSBOOMi is looking at augmenting existing cash on books and accounts receivables with a working capital loan that can help start-ups extend the runway to up to 12 months. The support will be structured as revenue financing, where the firms will repay the borrowed funds out of their revenue every month.

The borrowers will be offered loans on standard terms within 10 days of turnaround time for disbursement, according to SaaSBOOMi's website. A fixed percentage of revenue earned by the start-ups will directly go into repaying the loan over its tenure under revenue-financing disbursement model. The community has received around 50 applications for availing the scheme.

According to Garg, debt-based financing through digital lenders is emerging as an alternative form of funding for early-stage start-ups as they do not come under the target profile of venture debt firms.

"Venture debt typically caters only to firms in Series A or B funding stages, and sometimes warrants and equity element are involved. But here, these start-ups are taking the loans against existing revenue as collateral."

Indifi has also witnessed around 100 start-ups under TiE's Delhi NCR chapter apply for a similar growth-debt scheme launched last month for its members. "They have submitted documents and the credit assessment process is on," said Mittal of Indifi. “The first batch of loans have been dispatched and the interest has been strong so far.” 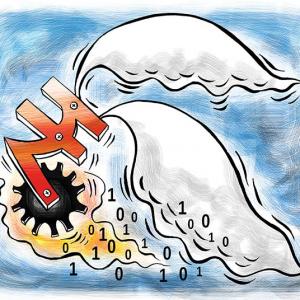