Around 275,000 migrant labourers and their family members have returned to the state. According to the state government, this number could exceed 1 million by the end of this month. 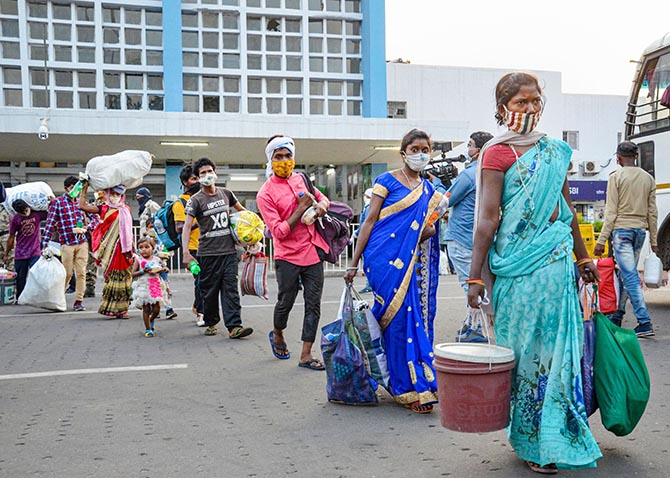 IMAGE: Migrants carrying their luggage walk to board buses for their homes after arriving from Jaipur by a Shramik special train, at Hatia Railway Station in Ranchi. Photograph: PTI Photo

When Shramik Special trains are ferrying thousands of migrant labourers back to their home state of Bihar amid the COVID-19-triggered lockdown, a train quietly left Khagaria, 180 km from Patna, in the early hours of May 7 for Lingampally in Telangana.

At Lingampally, the 226 passengers, all labourers, were welcomed by ministers and officials of the Telangana government.

This journey was arranged after much discussions between the two governments.

“These labourers will work at rice mills in Telangana. They had come home for Holi, but got stuck here because of the lockdown.

“They would be paid Rs 1,200 a day - almost four times what they could have earned here.

"This lockdown has made developed states acknowledge the power of Bihar’s workforce.”

Telangana has requested Bihar for more than 20,000 labourers for its rice mills.

But these labourers are only a fraction of those coming home.

As a Shramik Special train from Jaipur stopped at Danapur railway station in Patna, Anil Kumar was seen sobbing.

“We had nothing to eat, nowhere to live, and nothing to feed our children. We will never leave our village now.”

Several others bent their knees to the ‘soil of Bihar’, vowing never to go for work to other states.

“We were given the worst treatment. Everyone blamed us for this pandemic.

"Nobody was ready to buy anything from us because of some fake WhatsApp messages,” said Mohammad Shakil, who used to sell fruits in Jaipur.

Around 275,000 migrant labourers and their family members have returned to the state.

According to the state government, this number could exceed 1 million by the end of this month.

MGNREGA to the rescue

In a move to provide immediate relief, the state government has decided to provide jobs to these migrant labourers under the provisions of the Mahatma Gandhi National Rural Employment Guarantee Act (MGNREGA).

“The chief minister is holding high-level meetings daily to take stock of the situation.

"The  government has transferred Rs 1,000 into the bank accounts of 2.7 million people from Bihar who are stranded in other parts of the country.

"Now, our focus is to provide jobs to those coming back,” said a senior IAS officer.

The state government has already initiated almost 340,000 projects in over  7,750 panchayats.

“We are putting Rs 10 crore every day in the state’s rural economy as wages, paid to over 500,000 workers,” said the officer.

According to the state’s industry department, 70,000 skilled labourers have returned to Bihar, thus far.

It says a list of these workers will be shared with industry bodies and they will be offered job opportunities.

“More than 3,500 industrial units have been set up in the state. They can provide jobs to over  35,000 workers,” said the minister.

However, some experts raise serious doubts over the claims of the government.

The state government, in its own Economic Survey, pointed out various challenges under the MGNREGA scheme.

The average number of days of employment, too, has been fluctuating over the years; it was 42.2 man-days per household in 2018-19.

Then there is the problem of funds and payments often get delayed by months.

The enterprise sector, too, is in a dismal state.

The survey said Bihar has around 3,000 industrial units and adds only 0.5 per cent to the country’s Gross Value Added of the industrial sector.

Factories in Bihar are also smaller and each on average employs only 40 workers, against the national average of 77.

Because of this, a factory worker in Bihar earns only around Rs 10,500 per month.

A worker in neighbouring Jharkhand gets over Rs 31,000 per month.

The Bihar government has asked for a state-specific component in the Centre’s economic package.

“The Centre must also announce states’ share in the stimulus package so that we can get enough resources to deal with the current economic and health crisis,” said Rajak.

Shivanand Tiwary of the Opposition Rashtriya Janata Dal said: “The state government is saying that it will do this and that, but our system is still not that efficient and nor do we have a large pile of resources.”

On the other hand, V S Dubey, former chief secretary of Bihar, said: “The MGNREGA is the best way for providing immediate employment. The Centre and the state should pump money into this scheme...

"The state has ample money in its coffers. The problem is management. The administration has to be objective and accountability must be fixed.”

N K Choudhury, former head of department for economics at Patna University, said:  “The state government must activate panchayats and decentralise power to the lower rung of bureaucracy.

"It must give money in the hands of the people to jump-start the economy.” 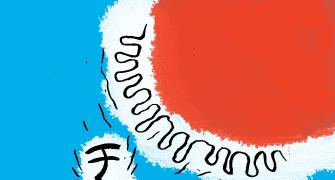