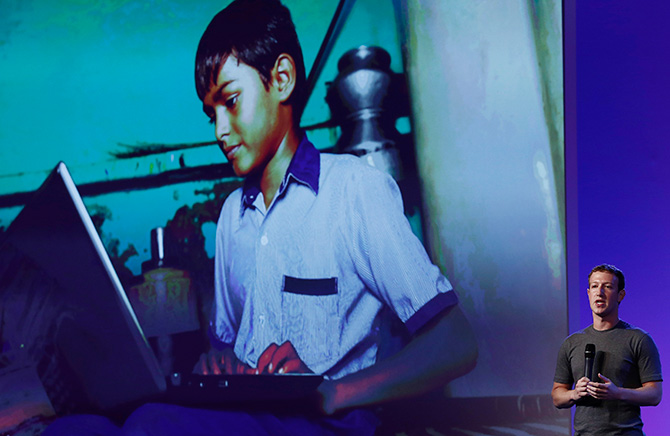 It perhaps was too warm in New Delhi for Mark Zuckerberg, the 30-year-old chief executive and co-founder of Facebook, to appear in a hood, something he has been identified with in real life, as well as in the Hollywood film about him The Social Network.

Zuckerberg, one of the world's youngest billionaires, who had arrived for his first official outing in India a day before, called internet connectivity a human right, inadvertently kicking up a row, on Thursday.

Replying to a question later, he clarified internet connectivity was an enabler but that did not mean it was more important than food, clean water and toilets.

The college dropout who made Facebook an essential part of life for millions of people walked on to the stage with a microphone for the keynote address at the Internet.org summit, an initiative aimed at connecting the world through partnership with telecom companies and other enterprises.

he famously precocious techie, who became a programmer at the age of 12 and co-founded Facebook from his Harvard dormitory at 20, had on Thursday turned up at the packed auditorium in blue jeans, a grey T-shirt and sneakers.

He took questions from the media on his business and his company's India plans - for about 25 minutes in a strictly-formatted way that seemed a contrast to the open social networking site he runs.

The security for this internet entrepreneur, including the emphasis on the colour of the stars on the guests' badges, could have been mistaken for that of a head of state.

India is the second-largest market for Facebook, next only to the US, but not when it comes to revenue.

The country, with 243 million internet users, has more than 100 million Facebook accounts; it leaves immense possibility for expansion.

Zuckerberg, who will meet Prime Minister Narendra Modi to discuss how Facebook could participate in the government's Digital India initiative before flying back to California the same evening, said: "Prime Minister Modi is incredibly committed to connecting the villages of India. I am excited about how we can help." 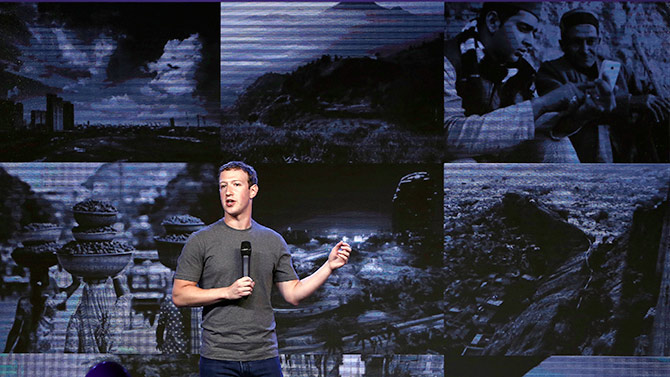 The go-to software developer on campus, who at the time of Facebook's initial public offering wrote the founder's letter to shareholders on his mobile phone, will have much else to share with Modi, a believer in social networking who relies on Twitter and Facebook to make announcements.

Zuckerberg on Thursday praised India's Mars orbiter mission, like Bezos before him, and will convey the same to Modi as well. He also spoke about the green revolution, the best engineers being in India and the country's many inventions that had changed the world.

"When the benefits of technology are shared across the whole society, that is where we can make the big leap. Because India has embraced science, the next generation has the opportunity to bring the world to India, and India to the world."

Due to the focus on science, engineering and research, broader connectivity in India would have a profound effect, he said.

Zuckerberg's keynote address or media interaction did not stand out for wit. Though he smiled a couple of times, he mostly remained straight-faced.

Most comfortable replying to technical questions, he refused to get entangled in any other issue, such as the legal complexities of business or privacy.

Basic free internet access was part of the agenda on his mind, and that, he said, should be like calling 911 in the US or 100 in India.

But there has been no such initiative in India so far. "We want to make it a successful model in other parts of the world which are smaller markets and have lower infrastructure barriers, before bringing it to a market like India," he said.

Infrastructure and social, cultural and economic barriers are blocking internet connectivity globally, and Zuckerberg said he was in India to knock down some of those barriers.

In fact, a $1-million initial fund has been announced to help developers build apps and new services, including for more local-language content, and a contest has been launched, too.

Besides language, there are other barriers as well. For instance, 69 per cent of those not connected did not know the benefits of being connected, Zuckerberg said, citing a recent study.