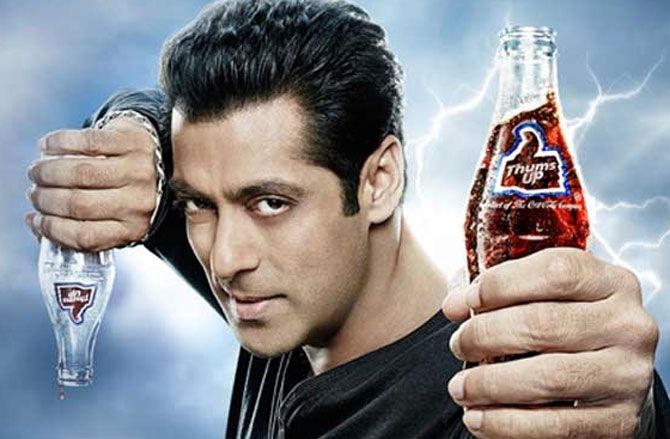 Beverages major Coca Cola India has dropped Bollywood superstar Salman Khan as brand ambassador for its soft drink 'Thums Up' after four years of association and the company is in talks with young star Ranveer Singh to replace him.

In a joint statement, Coca-Cola India said, "Salman Khan was committed to an existing relationship with a daily TV show, which this year happens to be sponsored by a brand that competes with the Coca-Cola India product portfolio."

"In light of this, both parties have mutually decided not to renew the current contract," the joint statement by Salman Khan and the company said.

A source said that the company is in talks with young star Ranveer Singh to replace Salman.

The company's decision to not to renew the contract with the 50-year-old actor is more to do with the image of Coca Cola, which is seen as a young brand, the source said.

“That explains why Coca Cola is talking to a much younger star like Ranveer Singh," the source added.

Khan has been among the top celebrity endorsers reportedly charging Rs 5 crore (Rs 50 million) per year per brand. Recently, he had courted controversy when he supported Pakistani artists saying "they were not terrorists" in the wake of a debate on whether they should be allowed to work in Indian movies after the Uri attack.

Coca-Cola India had roped in Khan as its brand ambassador for the second time to endorse its Thums Up brand in October 2012 replacing another Bollywood star Akshay Kumar. He had earlier endorsed the brand in early 2000s.

At that time, Coca-Cola India had also signed an agreement with Being Human - The Salman Khan Foundation – to jointly promote, conceive and execute charitable and social activities.