 The service tax increased from the 10 per cent to 12 per cent.

 The Cascading taxes has been reduced significantly by permitting utilization of input tax credits in a number of services such as catering, restaurants, hotel accommodation, pandal and shamiana and transport sectors. 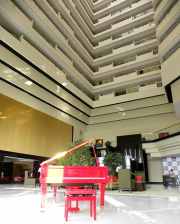  At present, there is 100 per cent deduction (investment-linked) available under section 35 AD is allowed to an assessee engaged in the business of building and operating hotel whereby the deduction can only be granted to the owner of a hotel if he himself operates. However, it is proposed in the current budget that while continuing to own the hotel, he can transfers the operation of such hotel to another person (Franchise) and the assesse shall be deemed to be carrying on the specified business of building and operating a hotel. This amendment will take effect retrospectively from 01st April 2011 and will accordingly apply in relation to the assessment year 2011-12 and subsequent assessment years.

in case of economy class travel is being replaced by an ad volrem rate of twelve percent with abatement of sixty percent subject to the condition on inputs and capital goods taken. This expected help the rise in demand for the hospitality sector.

 Exempt the industry from the multiple taxes  partly fulfilled

The increase in service tax from the 10 per cent to 12 per cent expected to impact the industry. This will negatively impact the industry. However, the reduction of cascading taxes by providing tax credits expected offset this. Also, the allowing 100 per cent deduction to the franchise model (operated by other) is positive to the sector.

The Union budget 2012-13 is insignificant to the Hotel sector. As the key industry expectations such as the Grant infrastructure status to Hotel industry and increase the depreciation of hotel building not happened. However, the increase in service tax will negatively impact the industry. But, providing the tax credits to reduce cascading taxes and allowing deduction to for the hotel operated by others  (owned by the assessee) were the key positives. Overall, the impact on the sector is neutral.
Powered by