Angel Broking is in talks with Citigroup Venture Capital International (CVCL) and other shareholders of Sharekhan to buy a majority stake in the brokerage, according to two persons familiar with the matter. 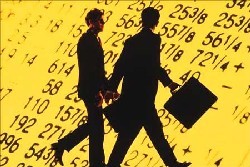 CVCL holds a 63 per cent stake in Sharekhan. The rest is held by Baring Private Equity Asia (12 per cent), IDFC (10 per cent) and the management and employees (15 per cent).

The combined entity will have 6,675 company-owned branches and franchises and 1.8 million customers.

It will command a 5 per cent market share in equity cash and derivatives, ahead of listed rivals such as Edelweiss, India Infoline, Motilal Oswal and Religare.

Both Angel and Sharekhan are predominantly retail-focused brokerages.

Dinesh Thakkar, chairman and managing director, Angel Broking, said, "We are looking for an acquisition in the retail broking space. However, it's too premature to talk about any deal."

Thakkar and his family own 87.65 per cent in Angel Broking, while International Finance Corporation (IFC) holds the rest.

Last year, according to media reports, Angel Broking was in talks with private equity (PE) firms, including Blackstone, TPG Capital and General Atlantic Partners, to raise Rs 300 crore (Rs 3 billion) by selling a part of its stake.

It had hired NM Rothschild & Sons for this.

Angel Broking would rope in a PE investor if it succeeded in acquiring a retail brokerage, Thakkar said.

An IDFC spokesperson said the company was not in talks with anybody for selling its stake. An e-mail query to Baring Private Equity Asia remained unanswered.

Since then, the valuations of brokerages have fallen by 20-30 per cent due to slow growth and falling yields, say industry officials.

The leading stock brokerages are losing market due to the increasing share of options in the overall volume and competition from new foreign players.

In such a scenario, consolidation is underway. In the last two weeks, Way2Wealth has acquired a 51 per cent stake in Techno Shares and Mumbai-based Networth Stock Broking has merged with Ahmedabad-based Monarch Projects.

With a tough initial public offer market, a conventional route for exits, PE firms are exiting investments through strategic sales.

The end of 2010 saw one of the largest exits in the Indian PE space, wherein PE majors Actis and Sequoia together made a $500 million profit on sale of Paras Pharma.