'They suck talent and dump elsewhere.' 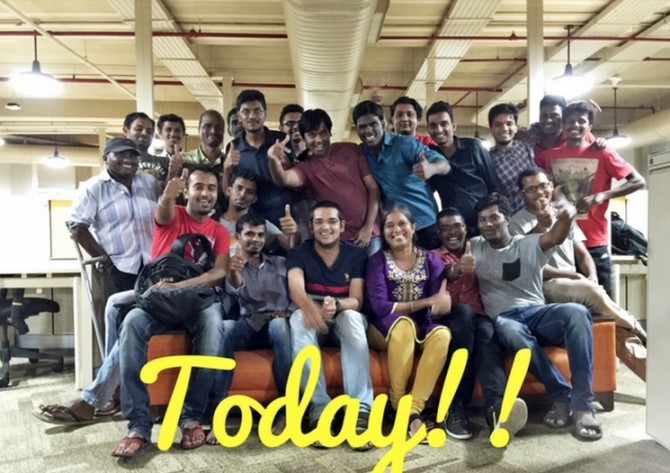 IMAGE: A photograph of Zoho Mail's engineers at 2 am after releasing a new version in 2015.
"As long as we get people with basic aptitude, it is easy to train them," says Zoho Founder Sridhar Vembu. Photograph: Kind courtesy Sridhar Vembu/Twitter

"If your employees do not have the skill, the company will not survive," Dr Vembu tells Rediff.com's Shobha Warrier.

When migration of job-seekers from rural to urban areas is happening, you chose to open Zoho's R&D centres in rural Tamil Nadu first and now in Andhra Pradesh.
Were you able to bring in talent from urban areas and also retain the talent in rural areas?

If you take any IT company in Chennai, 80% of the talent is not from the city.

Instead of bringing them here, had the companies created jobs elsewhere, they would go there.

I realised that they come here only because the jobs are here. That is how the idea to reverse the trend came to our mind.

Secondly, we also have a Zoho University with our own training programmes. So, we knew from where we get talent.

As most of our employees are from the southern part of Tamil Nadu, we thought why not create a centre there and see what happens.

So, 7, 8 years ago we established our first rural centre in Thenkasi and today, many young people from Chennai want to move there.

The impression is that youngsters prefer urban areas...

They prefer urban areas only because jobs are here.

If there are well paying jobs in rural areas, many people prefer staying there and not in a crowded city.

Today, roads are pretty good in rural Tamil Nadu and there are good schools there. There are also hospitals and even malls and other shopping centres.

With e-commerce gaining so much popularity, so many of them shop online. With good Internet penetration, people do not miss anything that is part of cities.

Even if 60% of job-seekers want to move to the cities, there is still another 40% who want to stay back.

And that 40% can provide us the base to build a centre there.

Did you have difficulty getting the right talent?

Not really. We never rely on raw talent; as a company, we create our own talent pool.

So, we do not rely on the education system that much. We have our own training programmes and we have our own Zoho University to train youngsters.

As long as we get people with basic aptitude, it is easy to train them.

Does that mean you don't agree with the general complaint of industry that a majority of youngsters coming out of universities are unemployable?

My opinion is that industry should do more to create talent.

For example, you take the Japanese companies, they created the talent they have.

I look at Canon as the role model. They take talent from universities, a physics or maths or chemistry graduate, and teach them the components inside the camera and the intricate technology, and train them in-house.

This is the case in the US too. Most people learn on the job.

No university can train people as camera makers or watch makers. You learn basic things in the university and after that, it is for the industry to train them in specialities.

So, instead of complaining about the quality of education, should industry be training the young people in specifics?

Yes. It is better for the companies and employees if companies invest in training.

If companies invest in training, you get a better quality of employees.

Of course, employees benefit by learning skills on the job.

I believe in this approach and that is why from the beginning, Zoho has been following the path of creating our own talent.

There are a lot of things happening in many areas where we don't have pre-existing skills. So, we have to train people in those skills.

For example, today no Indian company has the know-how to make a camera. We have to create the skill if you want to make cameras.

You can't say I want people with skills to make camera. They don't exist. It is the entrepreneur's job to create skills and nurture it.

It is said that unless a person upgrades herself/himself in technology, s/he will perish as technology is changing very fast.

This is absolutely critical as technology keeps changing. So, the right companies have continuous leaning as part of the job.

I am of the opinion that the employability of the workforce and the survival of the company are linked.

If your employees do not have the skill, the company will not survive.

The most important asset of any organisation is human capital, not the land or the building or the finance.

Even though intellectual property is important, people who create that are far more important.

So, every organisation should invest in people and skill. Many think that other assets matter, but the most crucial is the people.

I consider our biggest asset is our people. Without them, there is nothing; we don't exist. Why did you open R&D centres in rural areas?

I was born in a village in Thanjavur and I go back to my village quite often.

I started feeling that our development model is so lopsided that we are overcrowding the cites.

We are also pulling talent from the rural areas to cities. So, slowly villages are withering away. You see a sense of decay in the villages.

On one side, there is an excessive overcrowding in the cities and on the other side is rural decay.

What do you say about the opinion that you need great universities to create great products?

Last year, I asked the students of Sastra University in Thanjavur how many of them wanted to stay there after graduation. Only 2 out of 800 raised their hands.

Creating universities is not a precondition for creating great products.