Tamal Bandyopadhyay has been writing on the crisis in India's banking sector for many years.

At a time when it has come to a point that the government was forced to announce an unprecedented recapitalisation plan of Rs 2.1 trillion for public sector banks, Bandyopadhyay is releasing his new book on the subject.

His new book From Lehman to Demonetisation -- A Decade of Disruptions, Reforms and Misadventures is a collection of his columns published over almost a decade since 2008, when Lehman Brothers filed for bankruptcy, and chronicles the Indian banking sector's journey to its nadir post the "trans-Atlantic" economic meltdown nine years ago.

Bandyopadhyay, below, tells Rediff.com's Utkarsh Mishra why India's public sector banks are in crisis. The first of a two-part interview:

To what extent will the recapitalisation plan help distressed public sector banks?

In terms of infusing capital it is definitely going to help, but will it prop up the credit offtake overnight? Many believe it will happen, but it won't. Because the reasons of credit not taking off are different.

The investment climate is not good. There is still lack of confidence among investors, many of whom are fence-sitters.

It will also not bring down the interest cost. If you look at the cost of credit as a percentage of overall project cost, then you will understand why I am saying that.

Even if the banks are able to give loans after being recapitalised, where are the takers?

It will bolster the banks' capital and will encourage them to give credit.

But we've to wait and watch how the banks are identified (for recapitalisation). If the government is going to capitalise banks according to their size, then it may not be an ideal approach.

The government needs to distinguish between banks which should be around and banks which are slowly becoming irrelevant.

You start the book with the Lehman crisis, and also explain how the Reserve Bank of India shielded Indian banks from it. But there have been analyses -- as Finance Minister Arun Jaitley also remarked in the Lok Sabha -- that most of the NPAs are result of aggressive long-term lending by commercial banks during the high growth years -- before the 2008 crisis began?

That was the time when we had high credit growth, low inflation, and a lot of investments were happening.

Then the Lehman crisis happened, which was, however, not a global crisis. It was a trans-Atlantic crisis and the United States was responsible for that. They gave it a colour of a sort of global crisis to divert attention and made it something which was not their problem only.

And it did not affect India much as in a couple of quarters India's growth story was back.

But to ward off the effects of the crisis, India's commercial banks gave loans very aggressively.

The Reserve Bank of India flooded the system with liquidity. The cost of money came down and loans were given.

It is a classical economic theory, whenever there is a demand crisis, you flood the system with money and bring down the cost of money, create demand and that's how you get over the crisis. And that's what was done.

Also, there were loan restructurings, not once, but more than once for certain quarters.

Now we need to see the data and dissect the data to find out which contributed more (to the rise of NPAs), is it the easy money post Lehman crisis or the high credit growth before it.

I've not done that. But I think the post-Lehman events were more responsible, because not only the easy money and high credit growth, but repeated loan restructurings too created the problem.

Though it brought the economy back on its feet and it started booming again, it didn't last very long. 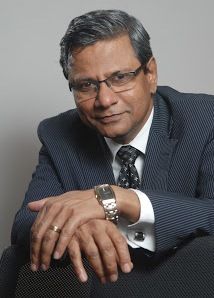 The argument often comes to performance of PSBs versus private sector banks. There are a lot of problems with PSBs which you also list -- that they are not very competent or they are not paid well.
Instead of periodic recap plans, why can't the government focus on those more?

Yes, that's very true. Because, you see, there are banks and there are banks, but primarily, public sector banks, which account for roughly 70 per cent of the banking assets, are more affected by the bad loans.

If you look at the private banks, barring one or two, most are reasonably better off than the public sector banks. Why is this? There are multiple problems. It is a very complex scenario.

The infrastructure sector is a case in point.

Look at the kind of exposure public sector banks have in the infrastructure sector, or any other sector like power.

Here there is a clear government push and nudge to do that.

So one, they take exposure in certain sectors without understanding them -- because the public sector banks, or most of the banks in India for that matter, do not have the expertise and experience of project financing.

They started project financing without properly understanding it. They have all become universal banks.

Now they were banks which were primarily into working capital, overnight they started giving term loans without having any expertise (for it).

Two, because they are public sector banks, they are bound by the industry-wide wage settlement for their employees.

Even the salaries of the bosses -- earlier chairmen and now managing directors -- were linked to the IAS cadre. So if you can't offer market salaries, how will you attract talent?

And on top of all that, they have the threat of 3 Cs -- the CBI (Central Bureau of Investigation), the CAG (Comptroller and Auditor General) and the CVC (Central Vigilance Commission).

They cannot take any decision without fear or being hounded by the investigative agencies.

So in this milieu, if you are not very efficient, you are bound to face problems which you are facing now.

Is the government ceding control over the PSBs the ultimate solution?

Theoretically yes, but it is (practically) impossible. I do not see it happening in India.

If there are no government-owned banks, then how would you make a project like the Jan Dhan successful? Who will extend help to make such projects a success?

So who will finance your welfare programmes? How will the government announce loan waivers?

Historically, public sector banks have been used as a government arm to finance various social causes as well as for political ideas like farm loan waivers or Jan Dhan.

So I don't think that (government giving up control over PSBs) is going to happen in India.

But what can happen, which the P J Nayak committee also suggested, is that the PSBs can be made a sort of quasi-government organisations.

The other two critical parts are to offer PSB employees market salaries and to take them out of the ambit of the 3Cs (CVC, CBI, and CAG).

This can be done without completely privatising them. And this will solve the problem.

And will this also impact rural credit growth?

No, I think the banks are realising that there is a merit in giving rural credit.

Most banks are now in search of new credit market, because the traditional project finance is not working anymore.

The bond market, which did not exist in a big way in India earlier, now exists. So there are many credit substitutes that are in place now. And a lot of non-banking finance companies are going into rural areas and making money.

So the banking system needs to understand that giving money to rural areas, lending small loans is actually profitable business. I think this realisation is slowly dawning on them.

And when they fully realise it, they will certainly go for it.