News
Business
Movies
Sports
Cricket
Get Ahead
Money Tips
Shopping
Sign in  |  Create a Rediffmail account
Rediff.com  » Business » 'Nirav Modi won't be back on the first flight to India'

'Nirav Modi won't be back on the first flight to India'

'It could take at least a couple of years for his case to go through the entire run of the British judiciary.' 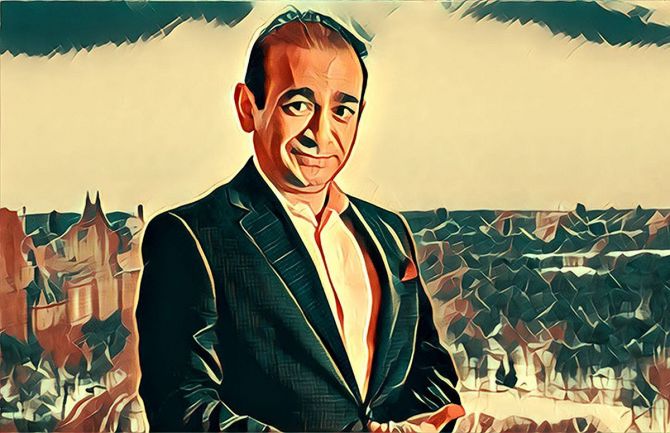 Three years have passed since the Punjab National Bank scam broke out, in which Nirav Modi allegedly siphoned off more than Rs 11,000 crore (Rs 110 billion.

Modi had fled India in January 2018 one month before the scam was exposed, his whereabouts a mystery until British journalist Mick Brown ran into him on the streets of London.

Brown's two-minute video with Modi created an uproar. Modi was arrested and the Narendra Modi government began legal proceedings to have him extradited to India.

Their recent book -- Escaped -- True Stories of Indian Fugitives in London-- covers the Nirav Modi case in detail as well as those of other Indian fugitives who have taken shelter in London, right from liquor baron Vijay Mallya to Bollywood composer Nadeem Saifi, an accused in the 1997 murder of music magnate Gulshan Kumar.

In an e-mail interview with Rediff.com's Syed Firdaus Ashraf, Danish and Ruhi Khan discuss the Nirav Modi case and the possibility of him actually getting extradited to India.

Danish: Unfortunately, Nirav Modi will not be back on the first flight to India. He is most likely to approach the high court in London to file an application to appeal the judgment of the Westminster magistrates' court and the decision of the (British) home secretary.

As per the procedure the application can only be made after the home secretary's decision so even though the judgment by the court came on February 25, 2021, Nirav Modi has 14 days from the decision of the home secretary (which came on April 16) to approach the high court.

Technically, the matter can also be taken to the UK supreme court and the European court as well. As per the timeline in other cases, it could take at least a couple of years for his case to go through the entire run of the British judiciary.

Even Vijay Mallya's extradition was approved by the British government last year, but he too has not been extradited yet. Do you feel Nirav Modi's case will end up like Mallya's?

Ruhi: Of course, Nirav Modi, like Vijay Mallya, will use every trick in the book that will benefit him, but the outcomes could be quite different. So far India has secured judicial victories in both the cases.

Modi can approach the high court now, but Mallya has exhausted his legal options in the British courts.

While Mallya's strongest argument has been political vendetta, Nirav Modi is now likely to place emphasis on his mental health.

Why are courts in London so harsh on Nirav Modi vis-a-vis Vijay Mallya? Mallya has got bail, but Modi is in jail for the last one year. Has he committed a more serious offence than Vijay Mallya?

Danish: One fundamental difference between the two cases, which are primarily frauds, is that the charges against Nirav Modi also include threatening witnesses and destruction of evidence. This has ensured that Modi remains behind bars since March 2019.

Why did these Indian fugitives choose the United Kingdom as their destination? What protection do UK laws give them which is not available in other countries?

Ruhi: We believe a sense of familiarity that the Indians shared with the British, the influence of the British culture on Indian life, the proximity and the ease of travel and migration -- all contributed to (Indian) fugitives picking up London as a destination to escape.

But primarily it is the faith in the British judiciary to test the requirement of a prima facie case and safeguard the human rights of the accused that provides a much sought after safety net.

As we show in our book Escaped, in the past few decades there has been a number of failures in extradition cases which has added to the perception that London is a place of refuge for those escaping the law in India.

Mehul Choksi, another Indian fugitive and Nirav Modi's uncle, chose Antigua over London. While researching your book did you come across why Nirav Modi chose London over Antigua?

Danish: Our book gives details on Nirav Modi's family and upbringing. While he was closest to his uncle Mehul Choksi, Nirav Modi wanted a more glamourous and iconic global branding to his jewellery.

We are not surprised he chose London over Antigua as London provided him the perfect base to restart his diamond business. He had made an attempt to secure citizenship of a small island country in the South Pacific ocean called Vanuatu which has no income tax, capital gains tax, inheritance tax or exchange control, in 2017 before the scam broke out.

What steps did the Indian government take diplomatically that worked in its favour against Nirav Modi?

It is a year since Nirav Modi has been in jail. Does his wife Ami appear in court to see him or is she also on the run after Interpol issued a notice against her?

Danish: No, Ami has never appeared in the court in London since Nirav Modi's arrest in March 2019.

Do you feel if Mick Brown, the British journalist, had not traced Nirav Modi it would have been impossible for the London police to find him?

Ruhi: Indian agencies were aware that Nirav Modi was in London but there were some procedural delays. Modi has claimed that he lived in London in a 'highly visible way.' His property rental was in his name; he was employed under a contract by his company under his own name and was also opening a bank account in his own name.

Modi's legal team was in contact with the police who had also visited his office once. But it was Mick Brown's report that brought Modi into the spotlight, caused public outrage and hastened his arrest.