News
Business
Movies
Sports
Cricket
Get Ahead
Money Tips
Shopping
Sign in  |  Create a Rediffmail account
Rediff.com  » Business » 'Sikka is taking Infosys to the next level' 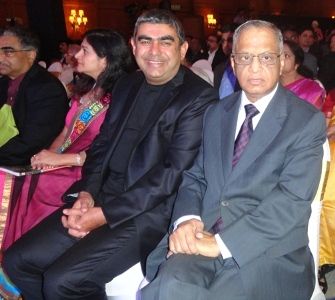 'I am looking at interesting kinds of start-ups.'

'If you look at Western industrialisation, they went from small farms to big farms, from locksmiths to factories, and from small retailers to Wal-Mart and Tesco.'

'The big theme is when 500 million Indians will be coming on to smartphones -- they will be very conscious of their data and how it's being used.'

Nandan Nilekani, below, co-founder of information technology giant Infosys and former chairman of the Unique Identification Authority of India, says Aadhaar 2.0 holds immense potential for the country, its people and for entrepreneurs.

Edited excerpts of a talk with Business Standard.

What keeps you busy nowadays?

Broadly, one area where I am quite active, along with my wife, is EkStep (a learner-centric, technology-enabled platform designed to improve applied literacy and numeracy).

I feel it's strategically quite important and if it succeeds, can have a huge impact on literacy.

The second thing is that using the knowledge of what's happening in the financial sector, Aadhaar and payments, I am trying to make people understand that we are at an important moment in financial sector disruption, which I call a 'WhatsApp moment'.

That's really to use all the new things that are happening -- technology like smartphones with iris authentication, designs like Aadhaar-based payment systems and some things at a policy level like small banks and payment banks.

So, how to drive change in the sector to reach a billion people and provide them access to all kinds of financial services.

Getting there is the journey; that's the hard step. I am also working with National Payments Corporation of India, where I am an advisor.

I do a few selective investments.

Recently, you invested in a start-up called Mubble. What attracted you to them?

Mubble is very specific to data.

The big theme is when 500 million Indians will be coming on to smartphones --they will be very conscious of their data and how it's being used.

Mubble looks at that usage and helps consumers be efficient in the way they use data.

She has a fantastic track record as a publisher.

She was my publisher before she quit Penguin.

She understands writers, content and what grips readers, and it's a mobile-first strategy.

So, I am looking at interesting kinds of start-ups.

I have also put investments into Team Indus because here is a company sitting in Domlur (in Bengaluru) and dreaming of putting something on the moon. We should support such ambitious ideas.

What does investment mean for you?

It's a very small part of my portfolio.

It is only to encourage entrepreneurs who are thinking, innovating on new solutions that are unique to India.

I am broadly looking at how technology can be used to make India (from) unorganised to organised.

If you look at Western industrialisation, they went from small farms to big farms, from locksmiths to factories, and from small retailers to Wal-Mart and Tesco.

So, you have to physically organise these into large companies to get the benefits of industrialisation.

The smartphone revolution is allowing you to aggregate millions of small producers to create a virtual large producer.

So, when Ola and Uber engage hundreds of thousands of drivers, each one (of the drivers) is an entrepreneur and the platform is aggregating them.

Airbnb is aggregating millions of small apartments, hospitality networks. Can you think about that in Indian retail, in Indian farming or logistics? To me, that's where the action is.

When you quit UIDAI and joined politics, did you have any doubt if Aadhaar was going to be continued?

There was obviously some amount of concerns. But, I think once they saw the value, they pushed it.

That's the strength of the idea.

It not only continued but was further accelerated. That shows it was an idea beyond politics. Aadhaar is a critical element of this government's strategy.

Now, 920 million people have Aadhaar, which will touch a billion in a few months.

What is interesting is that the big part of the present central government's Digital India programme is Aadhaar-based.

So, you did spend quite a bit of time to educate the government on usability of the Aadhaar platform?

When you create a new technology which has lots of potential, a big part of it is to evangelise its value.

People have to be evangelised.

We have all these activists who are talking about privacy and they have a smartphone in their hand and their data is sent to Cupertino (Apple Inc headquarters) or Menlo Park (Facebook headquarters) or something. It's complete hypocrisy. 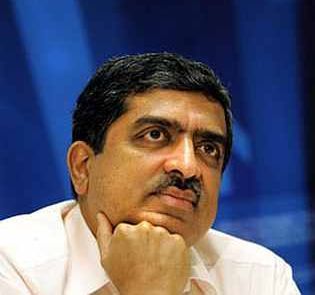 You talked of the WhatsApp moment. Are banks, particularly public sector ones, aware that they could be disrupted by this shift? They continue to open ATMs, bank branches.

My purpose of doing the WhatsApp moment in Indian financial services is multifold. One was to tell incumbents that this is coming, it's going to happen.

You'd better think about the implications for your strategy. One, to galvanise the incumbent banks, both private and publi, to wake up to this reality.

Second, to tell the new class of players - payments, small banks, banks set up by telcos, set up by the Paytms of the world - the opportunity is bigger than what you thought.

This is the game. It's your chance.

Coming to your book, Rebooting government, do you think the governance structure, whether it's parliament, executive or judiciary, would adopt the needed changes?

I am not talking about the organs of the system. Obviously, those are great institutions -- Constitution, judiciary.

We are talking about the underlying machinery that implements your policy into action; that's where the challenge is. I am redesigning that.

A part of the book is about the stuff we did at Unique Identification Development Authority of India -- Aadhaar, e-KYC, authentication, subsidy reforms, direct payments, cash transfers, GST, electronics tolling.

A part of the book is about the future; how such thinking can be brought into health care, education, the power sector and improving the speed of judicial system; how do you change the network design.

It also talks about how governments should think of regulations in a changing world.

Today, governments are facing Ola and Uber; they don't know what to do. In a fast changing world of technological disruption, the system has to rethink how it regulates those things.

If it regulates too tightly, it will curb innovation. If it does not regulate, it could lead to chaos. These are all things one needs to think of.

You have spent fair bit of time in strengthening the centres for public policy such as IIHS, etc. Do you think we need more such institutions?

India should have intellectual infrastructure for the 21st century. We need more universities, more think-tanks.

The US did that. If you think of the 20th century as the American century, it was not only because of their economic prowess.

It was also because they laid the intellectual infrastructure with great institutions like Brookings, Carnegie, CDC, CSIS (Center for Strategic and International Studies), MIT, Princeton, etc.

And, intellectual and research capacities in the universities and think-tanks provided the intellectual base for that development and growth.

Is the government doing enough in this front?

I think they are waking up to the requirement, though it has not happened yet. For example, we want to make IIHS (Indian Institute for Human Settlements) a world-class university but it's not that easy.

I think once the government realises, which I think will happen, that sector will open up.

Personally, I feel that really top-class foreign universities won't come here, as they are concerned about their brands.

So, what is more important is to allow Indian philanthropists who want to create world-class Indian universities over the next few years, so that it can absorb some of the people who want education.

If you look at the Patel agitation (in Gujarat), its root cause is getting seats in educational institutions and government jobs.

If India creates 10 new world-class universities, with private capital and philanthropic money, it will help in creating the intellectual infrastructure. Many a time, when people think of infrastructure, they used to think of it in physical terms.

Now, they are beginning to realise the importance of digital infrastructure such as Aadhaar, e-KYC, mobile connectivity.

The final part of the journey is intellectual infrastructure and that is embodied in think-tanks, research institutions and universities. That journey is yet to get started.

What about Infosys? When the leadership transition was happening last year, there were murmurs that you might come back to helm the company. Did you ever think about it?

Right from the beginning, one of the founding principles was that after the founders, the leadership would transition to a professional one.

And, it would be a company run by the best leader, based on meritocracy. I think we are very fortunate that transition has happened and Vishal (Sikka) and his dynamic team are in charge.

That's the right thing for the company.

Is the company moving in the right direction?

He (Sikka) is bringing in very dynamic thinking. He is taking Infosys to the next phase of journey, with design thinking and all that. We are very happy with his leadership.

You have also invested in a trust that would invest in media ventures. What is the objective?

My wife, Rohini, along with Azim Premji, is the anchor donor to the trust.

It's a philanthropic initiative.

She has donated some Rs 30 crore (Rs 300 million) to set up a trust which will fund independent, public spirited media.

That trust will make the decision. 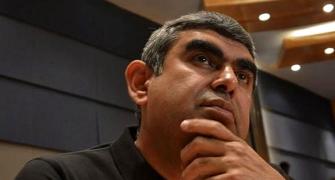 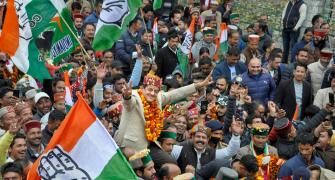 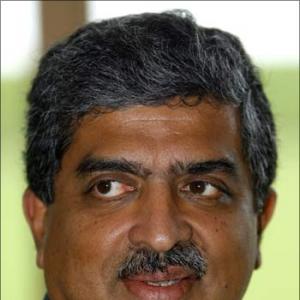 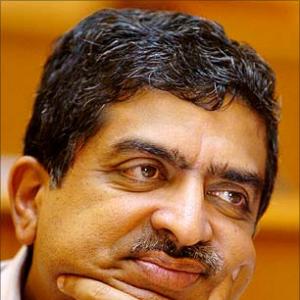