News
Business
Movies
Sports
Cricket
Get Ahead
Money Tips
Shopping
Sign in  |  Create a Rediffmail account
Rediff.com  » Business » Marc Faber says Sensex will drop to 24,000 levels in the near term

Marc Faber says Sensex will drop to 24,000 levels in the near term

'The recent GDP numbers that were reported by the government do not rhyme with the numerous economic indicators. The economy is probably growing at maximum 5 per cent per annum.' 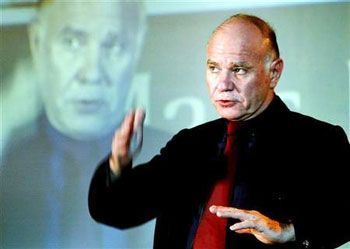 May 2015 marks one year of the Narendra Modi - led National Democratic Alliance (NDA) government in office. The party was voted to power on its promise of ushering in reforms that would help kick start the economy. The 'hope rally' at the bourses saw benchmark indices scale new highs. However, a year on, the optimism seems to be fading, with benchmark indices slipping nearly 10 per cent from their peak levels.

Marc Faber, a renowned global investor and author of 'The Gloom, Boom & Doom' report tells Puneet Wadhwa in an interview that investors are now awakening to the fact that reforms will take a lot of time and many may not even be implemented. Though he remains positive on the Indian markets from a long-term perspective, he expects the S&P BSE Sensex to drop to 24,000 levels in the near term. Excerpts:

The Indian government is about to complete a year in office. How do you evaluate the past 11-12 months of the government in terms of fulfilment of its economic reform agenda? What have been the key positives and disappointments?

My sense is that as regards reforms, some have been implemented but the pace of reforms is very slow. That, I believe, is a disappointment. Some investors have been disappointed that the RBI didn't lower interest rates much more. This, however, is not a source of my disappointment because I look at it from the point of view of currency stability; and I prefer to see currency stability for a few years before the RBI engages in monetary policy action that would lead to significantly lower interest rates.

You were among the early ones in March who expected the Indian markets to correct. Are we done with the correction or is there more to come?

I think Indian markets can correct further. We had the big move in India starting after the bull-run, which got underway essentially in 2013 and we had a strong performance in 2014 as well. I think this correction will last for a while.

So how much more downside do you see for the Indian markets? What are the factors that can trigger it?

Well, the S&P BSE Sensex went till the 30,000 mark and we can now easily drop to 24,000 - 25,000 levels. A lot will depend on monetary policy. Basically, I think the Reserve Bank of India (RBI) Governor, Raghuram Rajan, would like to see a strong Indian rupee. But he may be under a lot of pressure to lower rates. If he does lower rates, the rupee could begin to weaken more. While the stock market may go up, the rupee may continue to weaken - and in dollar terms, foreign investors are not going to make much money.

What are your top concerns as regards India as an investment destination now?

I have maintained the view that if one invests in India over the next 10 years, one will make more money than in the US. But obviously you will have to live with volatility. In the last few years, we had a lot of index-related investing. In other words, people just bought the index through the exchange traded funds (ETFs) or index funds. I think that going forward, say in the next 5-10 years, stock selection will become increasingly important.

How do you evaluate the recent policy moves by the government in terms of retrospective taxation issues, minimum alternate tax (MAT) etc? We have seen the pace of flows from foreign institutional investors (FIIs) to India slow given these concerns.

I think there was a lot of hope with the election of Narendra Modi that we would essentially have wide ranging reforms. So the stock market rallied very strongly. Now, we have a kind of an awakening that reforms will take a lot of time and many will not be implemented. Some reforms will be accompanied by new regulations. So I think that investors are sobering up a little bit. 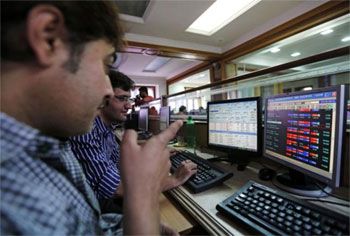 Do you think that FII flows to India could slow down over the next few months?

I believe that we had a very strong bull market in most asset prices - in bonds, stocks, property and art - around the world. My sense is that it will take a lot more money printing to drive up all asset prices. I personally think that most markets are fully priced, with a few exceptions.

And what are those exceptions?

There was an exception last year where in China the economy was slowing down and over the last 12 months, the Shanghai index is up more than 100 per cent. So all I am saying is that in this current money printing environment there is lot of volatility. Even in the EM, there are markets that are fully priced and some have potential.

We also need to consider the currency in case of Japan, for instance. When the currency went down, the stock market rallied sharply. Hence, it is not easy to generalise. But, I would say one asset class that appears to me to be very depressed, absolutely and relatively, are gold mining shares and mining stocks in general. Another asset class that was oversold bit now have gained somewhat are oil shares and oil servicing companies.

Many feel India's stock valuations are stretched after the recent rally, considering economic conditions have hardly improved from what they were earlier this year. What's your view?

The Indian markets are trading around 16 times earnings. However, some stocks like Nestle are quoting at nearly 50 times earnings. Thus, some stocks are very expensive, while some are not as expensive. As I said earlier, from here on, it will be a stockpickers market and not necessarily buying the index. While the index may not do very much, money will flow out of some stocks into other stocks.

By when do you see a revival in corporate earnings in the Indian context?

Some companies have reported good earnings recently. In general, if one talks about disappointments, the recent gross domestic product (GDP) numbers that were reported by the government do not rhyme with the numerous economic indicators. And so my sense is that the economy is actually weaker than what the government reported. The economy is probably growing at maximum 5 per cent per annum. The industrial production has been poor and there hasn't been much improvement on that front either.

Many investors are bullish on the e-commerce segment in India. Is this something that interests you as well?

Yes, I'm sure a lot of investors are positive about e-commerce and that's not only in India but also in the US and China. I suppose there will be some companies that will do well and others will fall by the wayside.

By when do you think the US Federal Reserve is likely to hike interest rates? Do you see the dollar gaining more strength against global currencies?

The US Fed has always remained data dependent. If the data is not so favourable, they are not going to increase rates. Now they may increase rates symbolically, say, by an eighth of a per cent in the hope of gaining some credibility. I think that the economy will continue to be weak, and therefore, no rate increase will happen this year. How vulnerable is the Eurozone to a break-up, especially after the developments in Greece?

I don't think a break-up is forthcoming in the immediate future because it is a very much a political issue. NATO (North Atlantic Treaty Organization), led by the US, is very concerned that if Greece leaves the European Union (EU), they will be courted by China or Russia or by a joint effort of foreign powers. I don't think it is as much of an economic issue as it is a political issue. I think the bureaucrats in Brussels and the politicians that are very close to the US will see to it that Greece stays united with the EU.

Do you think the case for investing in emerging markets is weakening?

I don't think the case for investing in the EMs is weakening. If you look at the valuations of stocks around the world, one of the most expensive markets is the US and you have a growth deceleration there. There is better value in Europe and the cheapest are the EMs. This year alone, we have seen EMs significantly outperform the US. We will have better performance in the EMs.

What are your regional preferences in Asia?

If we look at what happened in China, the economy has been weakening and some of the leading indicators are actually very weak. But still the stocks have rallied over 100 per cent. In my view, a similar rally can happen elsewhere, say not by 100 per cent, but the move could still be sharp. I think Vietnam would be a candidate; the Vietnamese stock market has been a horrible performer since 2006 but the economy has been doing reasonably well. While there is potential in Vietnam, it may not be realised this year and may take a year or two. If one buys Vietnamese shares around the current levels, one can expect a significant gain.

What about Taiwan and Hong Kong?

Taiwan is highly dependent on the technology sector where there is a slowdown. I am not too keen on Taiwan but I am aware that some strategists recommend Taiwan and South Korea with a view that they will perform similarly to Japan and rise slowly. This, however, is not my view.

As regards Hong Kong, there are some drawbacks but the valuations are relatively low. One can buy Hong Kong shares, Singapore shares and they would have a dividend yield of around 5 per cent. So it is not terribly expensive. But I don't think that they'll shoot up by 100 per cent. This year, Hong Kong is already up 20 per cent.

Oil prices peaked out in July 2008 at around $147 a barrel and slipped to $32 a barrel in December 2008. For several years since then, they remained around $100 per barrel. It is possible that oil prices will go down again and I don't rule out this possibility. However, it may not stay there for too long like in 2008 when we dropped to $32 levels. The equilibrium price is somewhere between $40 and $70 per barrel. Below $50, there will be very little exploration.