Individual banks should break away from the industry pact and have their own settlements with the unions, recommends Tamal Bandyopadhyay. 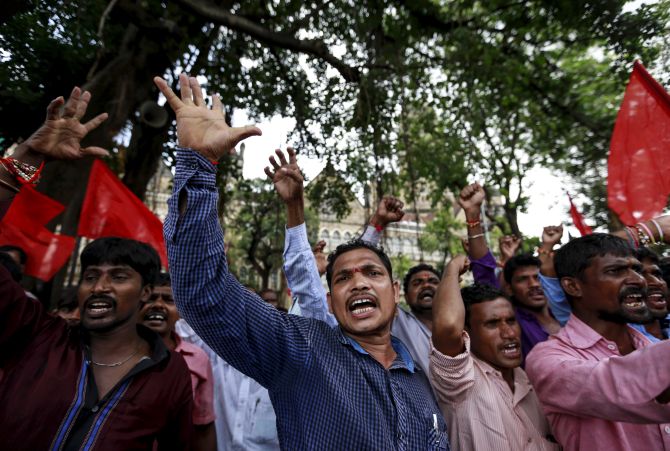 If you think the once-powerful bank trade unions have become toothless tigers, you are mistaken.

They can't bite the way they could do till a decade ago through frequent strikes, but they have not lost their fangs as yet.

This is why the Indian Banks Association, the premier industry lobby, has not been able to close the industry wage page -- the 11th bipartite settlement -- even after two years.

The previous agreement expired on October 31, 2017.

Of course, such long discussions have been the tradition and there is no hurry since irrespective of the date of signing the new pact, it will be effective from November 2017.

But one wonders whether a wage pact that covers the entire industry is relevant at all.

Till recently, 11 public sector banks were restrained from giving fresh loans; three PSBs have already got merged into one and another 10 will make four large banks.

There is nothing uniform about the industry, but the wage pact continues.

Is such a pact in vogue in any other industry of such scale in India?

Most banks are not in the best of health; a few of them have been making losses for years.

There is no surprise that the IBA had started the negotiations offering a 2% pay hike.

It has been raised to 6%, less than one-fourth of what the unions have been demanding.

Now, the IBA has upped it to 12% with a provision for adding a maximum of 4% performance-linked incentives (PLI) to it.

Since it is an incentive, it will not form part of the basic salary.

So, there will not be any additional cost for the banks in terms of higher provident fund and pension on account of PLI.

The 12% pay hike will translate into about 13.25% load on the wage bill because of the rise in basic pay and contribution to PF and pension.

Overall, around Rs 11,500 crore will be added to the wage bill for the industry in the first year.

The last settlement that ended in October 2017 offered employees a 15% hike.

Around three dozen banks of different hues have asked the IBA to negotiate the latest package with the unions.

The mandate from the private and foreign banks is mostly for their employees belonging to the clerical cadre.

Why don't banks do such negotiations on their own?

Probably the bank managements are not comfortable in dealing with unions.

The introduction of PLI is something new which the IBA has been pushing for.

This will be based on two parameters -- operating profits and return on assets (RoA).

Net profits and the level of non-performing assets etc will not be taken into consideration as there could be many reasons, including external interference, for the creation of bad assets.

But the unions are not willing to accept RoA as a parameter as the NPAs and provisions made to take care of them impact this.

Barring State Bank of India and Bank of Baroda, all other banks are willing to offer the new wage pact to employees up to scale VII or the level of general managers.

These two banks want to restrict the coverage of the new wage pact till scale III, covering the junior and the middle management, but I understand that if the unions accept the PLI, both SBI and BoB might agree to raise the coverage to the general manager level.

Incidentally, PSB employees up to scale III or managers are better looked after than their counterparts in private banks.

The trade unions's demand for five-day week has not been accepted (now, the bank employees get the second and fourth Saturday off every month).

Also, the demand for the so-called updation of pension has been rejected.

In its absence, the pension of a retired employee does not rise with a new wage pact.

The first such settlement was signed in October 1966.

Apart from the IBA, the Bombay Exchange Banks Association, representing foreign banks in India, was involved in the first pact, with a three-year tenure.

The Bombay Association does not exist anymore and foreign banks operating in India have joined the IBA.

The continuation of the industry-wide wage pact for over six decades tells the story of the trade unions's sway over the industry even though the IBA always tries to find ways to get more from the unions while negotiating the wage settlement.

For example, in 2002, while signing off on a 13.3% wage hike, the IBA, on behalf of bank managements, extracted a blanket go-ahead from the unions for computerisation -- anathema for unions till then.

The unions also accepted transfer of employees, which had been quite tough for the bank management, even though theoretically all bank employees can be transferred within a zone where the same language is spoken.

An industry-wide wage pact is the most bizarre performance appraisal process simply for the fact that the benchmark for such a pact is the paying capacity of the weakest of the banks.

Isn't this unfair to the employees of strong and profitable banks?

Brotherhood is not exactly a great idea in a market economy.

Individual banks should break away from the industry pact and have their own settlements.

And, of course, the employees of healthy banks should get stop options to have their skin in the game.

Finally if the banks want to reach the unbanked and offer services to the people in the so-called bottom of the pyramid, they should have a differentiated wage structure.

Why should a PSB branch manager in, say, Gadchiroli in southeastern corner of Maharashtra, have the same salary as the branch manager in Malabar Hill in south Mumbai where the cost of living is far higher?

Banks are making efforts and learning the tricks of risk management, recovery and technology, but when it comes to handling trade unions -- which is far less complex -- their inhibition remains a mystery.