‘Unfortunately, our political leaders have consistently chosen to ignore this potential of the people.’

‘Right from Indira Gandhi to Prime Minister Narendra Modi, the political discourse has centred around handing out sops to the masses.’

'Instead of being a facilitator, each political formation has only tried to be an ATM for freebies.' 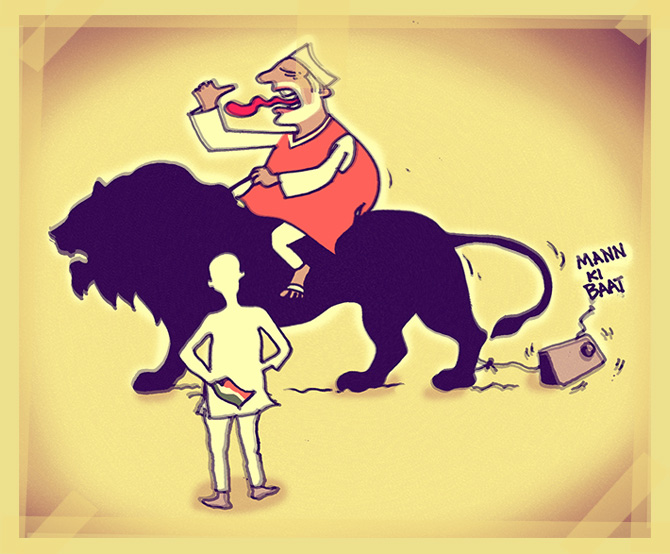 When he was 13, dreaming about his future, my father thought how wonderful it would be to wake up every morning and find a ₹100 note under your pillow.
“And you know what,” he said to me, laughing, “Thirty-nine years later, when I retired from the army, that’s about how much I got as pension.”

He retired a colonel in October 1992, a year after the country opened up its economy, on a pension of ₹3,700 a month. That came to nearly ₹125 a day. Just a bit more than what he had once wished for as a child. It’s not enough to buy a kilo of apples today. But in those days it was enough to lead a comfortable life.

Like many others from his generation, my father had worked his way up from scratch. Life was a struggle but this was a generation of self-driven people who had a burning desire to reach someplace better.

My father’s is not a unique story.

There are thousands and thousands of such stories of grit and determination in India.

Each one of them speaks of the immense potential that lies within us.

Unfortunately, our political leaders have consistently chosen to ignore this potential of the people.

Right from Indira Gandhi to Prime Minister Narendra Modi, the political discourse has centred around handing out sops to the masses. 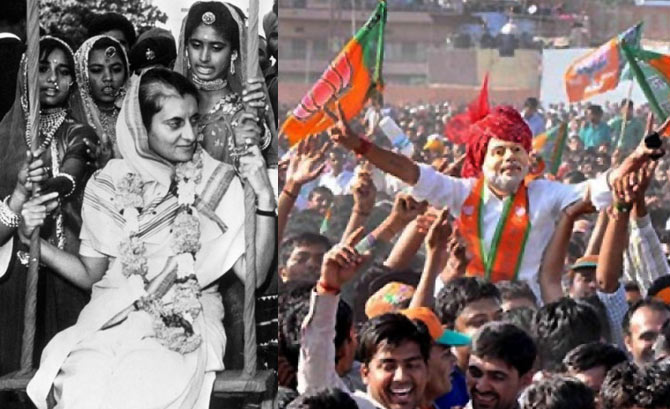 IMAGE: "Instead of being a facilitator, each political formation has only tried to be an ATM for freebies." Photograph: Express/Getty Images and www.narendramodi.in.

From Indira Gandhi’s garibi hatao campaigns, which Rajiv, then Sonia and now Rahul Gandhi built on to reap political dividends, to Modi’s Robin Hood act of taking from the rich and giving to the poor, the concept of the mai-baap sarkar has remained intact.

This has been a consistent narrative across states.

In Tamil Nadu, where J Jayalalithaa lies convicted in death, there are still debates about whether her legacy is corruption or pro-poor politics, which, among other things, included doles and handouts.

Instead of being a facilitator, each political formation has only tried to be an ATM for freebies.

Rather than create an environment for people to achieve their potential, each has marketed itself as being better at this than the other.

Now another narrative has entered the discourse that reminds me of the days when we were younger. Back then, our world existed somewhere in the middle of two rather uncomfortable worlds -- of the exploitative rich and the exploited poor.

We encountered these other worlds only in the movies that almost always depicted wealthy landlords and moneyed businessmen as evil people who thrived at the expense of the poor. Class struggle was a common theme that played out in the movies in those days.

But Yash Chopra and Karan Johar would change that narrative. We would discover that the hero, too, could be a rich, successful businessman, who drove expensive cars, holidayed in exotic locations and had a heart of gold that could trigger a tear fest at the drop of a hat.

The drastic announcement November 8, which junked 86 per cent of the currency in circulation, and the events that have transpired since have brought the rich versus poor narrative of the 1970s and 1980s back into focus.

The aim of the decision was to go after black money, encourage a transparent economy and get the evaders to start paying tax.

I am not sure if this extreme step will succeed in making them do so and that it will not hurt the poor even more, but it is done and we need to move on.

As does the prime minister who has been going around election-bound states, thumping his chest, saying: Look, you poor people, look what I have done for you. I have taught these rich people a lesson and shaken up their lives for your sake because I am one of you and I understand your pain.

Prime Minister Modi has the ear of the masses. They listen to him mesmerised.

A true statesman would channel this power to inspire people in more positive ways so that they find the fire in them to chase their dreams -- even if it is a humble one of finding a ₹100 note under the pillow every morning.

We are standing at a promising juncture today. The New World Wealth report, announced earlier this week, has ranked India as the sixth richest country in the world, with a total wealth of $6.2 trillion.

With 264,000 millionaires and 95 billionaires, we are richer than France, Italy, Australia and Canada.

There is an Indian dream waiting to take off. How about focusing on that? 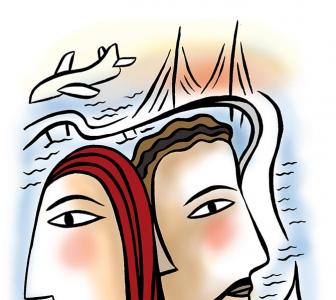