'The government needs to take immediate steps to provide a reprieve from multiple carbon taxation to help them remain globally competitive.

'It needs to be borne in mind that in future, Indian aluminium’s role in nation-building will be paramount, and a self-sufficient aluminium industry will propel India to a global leadership position, says Sushil Kumar Roongta. 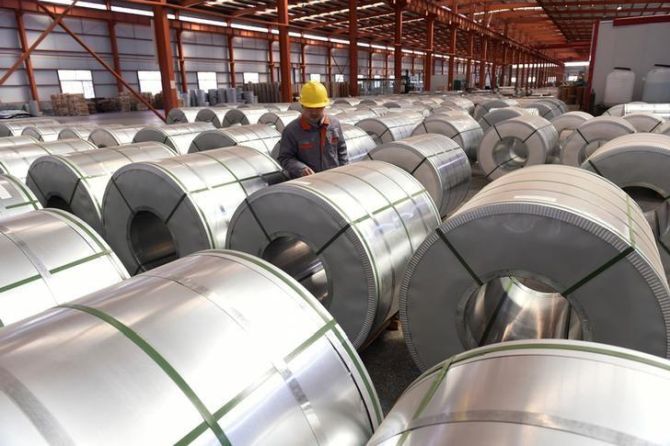 Aluminium is a strategic metal for the Indian economy.

The aluminium industry, in keeping with the anticipation of rapidly growing demand, has invested more than Rs 1.2 trillion to build its production capacity.

Currently, the sector is struggling to stay afloat due to an unprecedented spike in power costs.

The aluminium sector is one of the more power-intensive industries, where power accounts for 40 per cent of the production cost.

The power cost itself has increased by about $280 per tonne, triggering a 16 per cent increase in production cost in the last three to four years.

Even the NITI Aayog, the policy think tank of the government, has taken cognisance of the surging power cost.

It has conceded in a report that the domestic aluminium sector is struggling due to increasing production cost, which is the highest among all the large aluminium making countries in the world.

The cost of power, it agrees, is a key responsible component.

It is worth noting that the burden of renewable purchase obligation (RPO) alone has driven the production cost up by about $50-60 per tonne, and the continuing shortage of renewable energy certificates (REC) in the market is expected to further aggravate conditions by another $40-50 per tonne.

Along with other tariffs like coal cess and electricity duty, the cumulative cost of production has crossed $100 per tonne.

Some of the manufacturing and energy-intensive industries are owners of captive power capacities.

These captive capacities have been set up keeping in mind the exact requirement of power in these industries.

With the mandate of purchasing a portion of the power from renewable sources, these industries are left with idle capacities that currently amount to 30,000 Mw.

For the aluminium sector, which cannot pass on the additional cost, these factors put them at the risk of becoming unviable.

In addition to these, the ministry of power’s recent decision to increase the RPO target to 21 per cent by 2022 and market dynamics triggering a spike in REC prices, is putting added pressure on the aluminium sector.

Surprisingly, while the cost of renewable generation has come down in recent years, the industry is paying a high price to purchase RECs in the skewed market, fraught with faulty regulatory mechanisms.

This condition is not unique to the aluminium sector.

It has afflicted almost all industries that are energy-intensive in nature.

As a consequence, various industry associations have raised the issue of exorbitant power costs with the government, and have emphasised that the survival of these sectors is at stake.

However, the biggest possible dilemma in this matter is the acute shortage of installed renewable capacity in the system.

As per the government mandate, the 225,000 Mw of thermal capacity that exists in the economy requires 120,000 Mw of renewable energy for offtake.

Yet there is only 80,000 Mw of total installed renewable capacity, which leaves about a deficit of 40,000 Mw.

Similarly, the 30,000 Mw of industrial power consumption is obligated to purchase 15,000 Mw of renewable power, which too is not available in the market.

If one takes note of the gravity of the situation, it will become clear that there is an urgent need for the government to intervene and provide specific relief to the power-intensive industries, especially those where renewable energy is not a feasible option.

They now expect the government to see this through with a slew of policies that will create a facilitative environment for the sector.

Specifically, for the aluminium industry, the government needs to take immediate steps to provide a reprieve from multiple carbon taxation to help them remain globally competitive.

It needs to be borne in mind that in future, Indian aluminium’s role in nation-building will be paramount, and a self-sufficient aluminium industry will propel India to a global leadership position.