‘If businesses are focused on de-leveraging, they can hardly be investing. This is the price extracted by investment mistakes during UPA rule, and should have been foreseen.

‘But Modi-I must share the blame, for muted reform of the financial sector, partisan policy in telecom, the harm done to exports by an over-priced rupee, and so on,’ says T N Ninan. 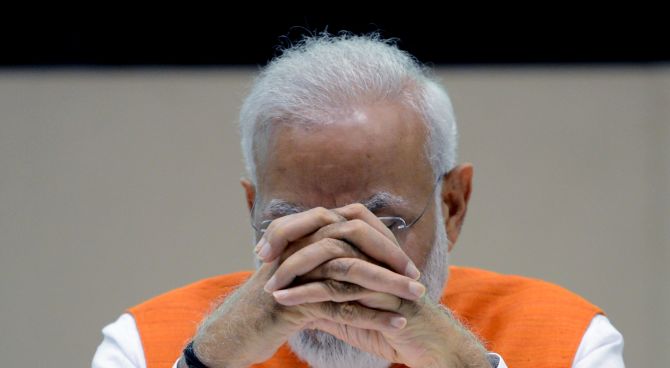 There is a general sense that the economic growth problem came upon us suddenly in the last few months.

In some ways, it did -- for example, through the continuing fallout of the collapse 11 months ago of IL&FS.

That was about the time when the decline in automobile sales began.

Similarly, Jet’s collapse in April sent up air fares and applied the brakes on what until then was rapid growth in air traffic.

In a sense, therefore, the burdens hanging heavy on current GDP numbers are stochastic: The result of random events in different market segments, and hence not predictable.

Yet, many numbers tell us that today’s denouement could have been seen coming.

During the five years of Modi I, the net sales of 2,769 non-financial companies tracked by Capitaline increased by a modest 34.5 per cent, even as their net profits increased by an even more modest 20.6 per cent (less than inflation during this period).

Most tellingly, assets increased hardly at all over the five years, by just 3.5 per cent -- affected, it would seem, by the bankruptcy process because 2018-19 saw a precipitous decline in private sector assets.

These growth rates do not support the official 7.5 per cent growth narrative.

The major source of the problem is clear when one looks at the only corporate number which has improved over the five years: The debt-equity ratio.

If businesses are focused on de-leveraging, they can hardly be investing. This is the price extracted by investment mistakes during UPA rule, and should have been foreseen.

But Modi I must share the blame, for muted reform of the financial sector, partisan policy in telecom, the harm done to exports by an over-priced rupee, and so on.

What could not have been forecast is a startling statistic buried in the 2018 report of the task force for drafting a new income-tax law.

The report says that corporate investments plunged by an incredible 60 per cent in 2016-17, to Rs 4.25 trillion from Rs 10.33 trillion in the previous year (numbers highlighted by Puja Mehra in The Hindu).

This was of course the demonetisation year. Figures for subsequent years are not available, but the data compiled by the Centre for Monitoring Indian Economy show corporate investment projects continuing to remain at multi-year lows.

Another troubled sector, real estate, must blame itself for much of its troubles. But this traditionally cash-driven business has been affected by both demonetisation and the financial turmoil.

Consider the financing trends compiled by HSBC. In 2013-14, 61 per cent of fresh funding for the sector came from banks.

By 2017-18, this had dropped progressively to zero because of the state of banks’ balance sheets.

The slack was picked up by the non-bank financial companies -- but these have not been able to lend in recent months because their own sources of funding have dried up, post-IL&FS.

Finally, since even biscuit sales seem to have been affected, consider the trend in real (ie, inflation-adjusted) rural wages, for both agricultural and non-agricultural jobs.

A slump in rural demand was inevitable.

The government has announced some policy measures but its fiscal situation is stressed.

In this context, the Comptroller and Auditor General’s report on the goods and services tax (analysed in these pages by Nitin Sethi earlier this week) leaves no room for doubt that one of the big reform initiatives of Modi I was a botched job, and may continue to disappoint when it comes to revenue collection.

All in all, Modi II will need to focus on undoing the damage done, and on tackling jobs left undone, during Modi I and UPA I & II.

Aiming in the meantime for unachievable growth rates would compound past errors.

The Indian economy has to lower its sights, and do some hard thinking about how to come out of the present hole.