None could anticipate that an intelligent and articulate Kochhar who has every possible award in her cupboard would compromise on her integrity, as has been claimed by the Justice B N Srikrishna Committee probe.

In the first of a two-part series, Tamal Bandyopadhyay explains why the ICICI Bank’s board first rushed to deny all allegations against Kochhar and then took the extreme steps against her. 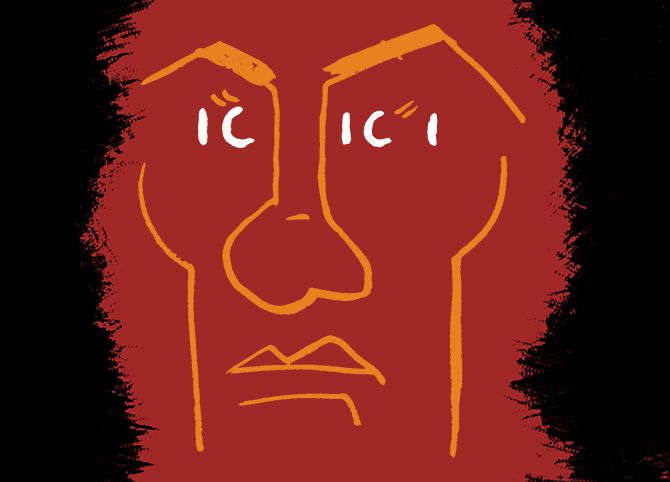 In February 2017, now sacked CEO and MD of ICICI Bank Ltd Chanda Kochhar had addressed a group of investors at a Singapore hotel at the bank’s in-house merchant banking outfit’s annual road show.

Much to her embarrassment and annoyance, one global investor asked her with a straight face: “Wouldn’t a bank chief in any other geography have lost the job after the kind of performance ICICI Bank has put up over the years under your stewardship?”

An awkward smile laced with silence was her answer.

After all, ICICI Bank had underperformed its peers as well as the Bankex, the BSE’s banking index, by yards.

She could not blame the investors for losing patience after being at the helm for eight years.

Most in the financial sector had read the story that alleged Kochchar’s husband Deepak’s business relationship with Venugopal Dhoot’s Videocon Group, a borrower of the bank.

It was discussed at the cocktail circuit and many wondered why Kochhar or her bank wasn’t filing a defamation suit against Live Media & Publishers Pvt Ltd, the publisher of the magazine.

Two years down the line, Kochhar got the boot -- not because of her performance but for violation of the bank’s code of conduct.

Three months after she resigned, in January 2019, the bank’s board terminated her for failure to deal with conflict of interest (not recusing herself from credit committee meetings that took a call on giving loans to Videocon) and lack of disclosure (of her husband’s business links with the Videocon group).

Kochhar was “disappointed, hurt and shocked” but she doesn’t seem to be contemplating any legal action against the bank for being treated this way after serving 34 years with “dedication and hard work”.

Proud of her “honesty, dignity and integrity”, she is certain that “truth will ultimately prevail”.

This was Kochchar’s first ever reaction, after the bank sacked her and asked to return her bonuses earned (around Rs 8 crore as the 2018 bonus has not yet cleared by the regulator) and denied her at least Rs 125 crore in the form of stock options.

What went wrong? Why had the bank’s board rushed to deny all allegations against her (while Kochhar kept quiet) initially and then took this extreme step? What has been the role of the board? What next for Kochhar?

In the first week of March 2010, the top brass of the bank camped out at Kumarakom Lake Resort in the backwaters of Kerala for the offsite -- the first after Kochhar took over as the boss in May 2009, succeeding the legendary K V Kamath, the king of retail loans in India.

Ahead of the offsite, McKinsey and Co made a presentation to senior executives of the bank, pointing out that ICICI Bank had not been growing and was losing market share to its peers.

The analyst community was happy when she shrank the balance sheet -- an anathema for her mentor Kamath whose model was the big fat Chinese banks.

After the consolidation phase, Kochhar grew the balance sheet and bad assets.

Many of us thought that she had read the economic trends wrongly but none could anticipate that an intelligent and articulate Kochhar who has every possible award in her cupboard -- from Woodrow Wilson Award for Global Citizenship to Padma Bhusan, the third-highest civilian award in India -- would compromise on her integrity, as has been claimed by the Justice B N Srikrishna Committee probe.

The Infra Live report was based on a letter written by Arvind Gupta, a shareholder of both Videocon and ICICI Bank, which raised many questions about the financial links between Kochhar’s husband and Videocon’s Dhoot, and she playing a role in the bank giving loans to the Videocon group.

Then chairman of the ICICI Bank Board, M K Sharma, appointed law firm Cyril Amarchand Mangaldas (CMA) to advise him on this matter.

The law firm apparently gave her a clean chit.

Also, the Reserve Bank of India (RBI) conducted a probe.

It apparently did not find anything wrong in the process of the loan disbursements but pointed out that the business relations between Deepak and Dhoot are spread beyond the shores of India.

The Indian central bank was not in a position to probe that.

I have not seen the report but why didn’t it hand over the investigation to the appropriate authorities which could take it forward?

By January 2018, the Central Bureau of Investigation got into the act and The Indian Express newspaper front-paged the story of Deepak-Videocon relationship in March.

That was the time, Sharma, former chairman of the bank, fiercely shielded Kochhar against all allegations.

However, none of them mentioned the probe report of the RBI or the law firm, based on which they seemed to have not found fault with Kochhar.

They gave the benefit of the doubt to their star CEO.

The scenario dramatically changed when an anonymous whistle-blower wrote a much more elaborate letter, listing many more alleged misdoings of Kochhar and her family, which Gupta’s letter did not mention.

That brought the market regulator Securities and Exchange Board of India (Sebi) into action and, for the first time, Kochhar disclosed her husband’s business relations with the Videocon group.

(There was yet another whistle-blower letter but that spoke about some 31 loan accounts where the bank apparently did not follow the correct income recognition procedures and had nothing to do with Kochhar’s personal integrity.)

These developments probably made Sharma realise his mistake and he appointed the Srikrishna Committee for a comprehensive probe -- spanning the period between April 2009, a month before Kochhar took over the mantle from Kamath, and March 2018.

The law firm immediately withdrew its report as it was based on an assumption that no relationship between Deepak and Dhoot ever existed as Kochhar had never mentioned this before.

The Srikrishna panel did not have any deadline. Why?

Next: Lessons India Inc can learn from Kochchargate