The much anticipated correction is here!

By Sonali Ranade
October 30, 2012 11:27 IST
The question now is the extent and duration of the correction, says Sonali Ranade Gold [$GOLD]: As expected last week, gold continued to correct from its recent top at $1795 to end the week at $1710.30. While this correction is far from over, a minor pullback in prices is now due after which the metal could retest its support around its 200 daily moving average currently positioned at $1661.

The metal's future trajectory will be determined by the market's reaction to the metal around its 200 DMA. Should the support hold, a robust rally in the metal can be expected, which may see the metal retest its previous top in the next few months. 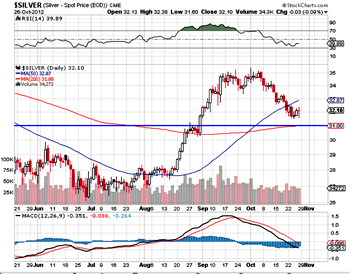 The metal is due for a counter-trend pullback from the $31 area and could head towards $35. However, the metal's pullback from its recent low of $26 has been weak and unimpressive. A pullback beyond $35-37 region looks highly unlikely which puts the metal in a long term downtrend.

WTI Crude: Crude broke through my stop at $88 negating my last wave count which was bullish. It closed the week at $86.28.

Crude has strong support between $84 and $86 after which the possibility of a retest of the $78 level exists. I could argue that the break below my stop of $88 by a small margin was something to be overlooked but will not do so because the breach invalidated my wave count. 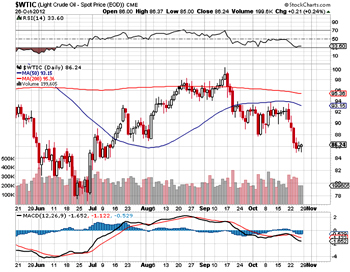 Nevertheless, it is pertinent to point out that on long-term daily charts, the rising trend line from $35 in February 2009 through $78 in June 2012 is intact and my bullish prognosis on crude continues to hold. I will not be surprised to see crude rebound from the $86 region. However, absent a revalidated wave count, the probability of a retest of $78 cannot be ruled out. 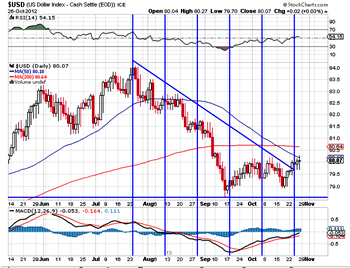 US Dollar: As expected, the $ rallied in a counter-trend making a high of 80.350 against our expected high of 80.50. The counter-trend rally is stronger than one expected and could continue in the ensuing week to test the 200 DMA currently at 80.54. Euro$: Repeating last week commentary as it continues to hold:

As expected, the euro$ continued to correct from its recent top at 1.3175 and closed the week at 1.3021. The euro did attempt a counter-trend rally from the low of 1.28 for the previous top but turned down well before that level.

Barring small counter-trend rallies, the euro is now set for a retest of 1.28 level in the next few weeks. If that level is breached decisively, the currency would unleash a destructive C wave its ongoing correction from the top of 1.5000 whose target could be 1.2000.

So watch the 1.2800 level like a hawk. Keep a stop loss just above 1.32 for shorts. A rally above that level will negate this analysis. 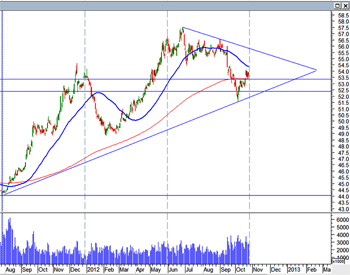 $-INR: As expected the $ turned down from INR 54, but contrary to expectations, has decided to consolidate above its 200 DMA at 53.15.

The $ could continue its consolidation above its 200 DMA for the ensuing week capped at the top by 54. Rather difficult to see how a $ rally can build up from here without at least an attempt to retest 52.50. Neutral on the $ until it either retests 52.50 or shows a robust base build up just above its 200 DMA. 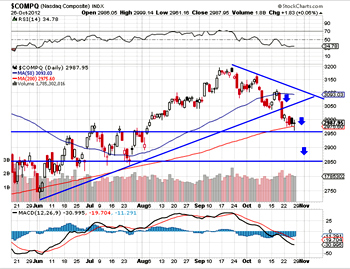 First support for Nasdaq Comp lies at 2950 followed by a more robust support at 2850. Until 2850 is decisively violated, it may be premature to assume that the long-term rally from March 2009 lows is over. In fact there could be a small counter-trend rally from 2950 before further declines are seen.

The correction in the Nasdaq will take a while to unfold and could continue March-April 2013. Further confirmation would come on a violation of 2950 after a small bounce from current levels. 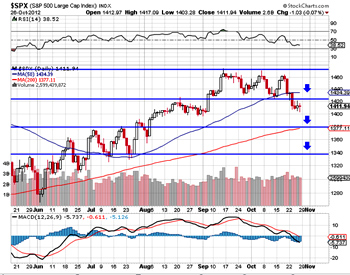 robust support at 1360. One could see a modest bounce from first support but it's unlikely to last long. The index's 200 DMA is at 1370. Future trajectory of this correction will depend on the market's reaction to the prices in the 1360/70 area.

Much like the NASDAQ, SPX too could be in a running correction to the long-term rally from the lows of March 2009. SPX looks stronger than NASDAQ on current form.

CNX NIFTY: Reproducing last week's chart to show how NIFTY bucked the downtrend by consolidating above 5540 even as it kept in step with the correction in US markets.  Clearly, NIFTY intends to chart its own course although it may keep in step with US markets as far as direction goes while keeping the distance under its own steam. 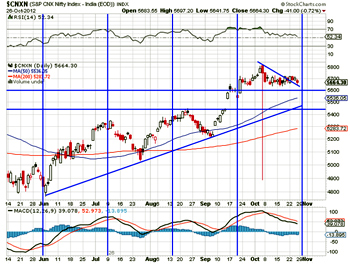 The NIFTY could see a bounce from 5640 levels over the ensuing week. The extent & robustness of the bounce will provide clues to NIFTY's future trajectory. That said, 5815 should be treated as a near-term top and the current fall a correction from that level unless proved otherwise. 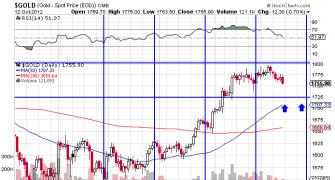