The RBI governor has to convert the zero-sum game with the government from a non-cooperative one -- which his two predecessors had made it -- to a cooperative one, explains T C A Srinivasa Raghavan.

In game theory, a zero-sum game is one where what is won is exactly equal to what is lost.

If you examine the current debate on the government and the Reserve Bank of India or for that matter any debate on governments and central banks anywhere in the world you will find that this is how it is discussed.

What one side gains is exactly equal to what the other side loses.

But this is a bad way of discussing the issues, especially in the Indian context where we can have both sides losing or both sides gaining.

To avoid this is Governor Shaktikanta Das's biggest challenge. He has to convert the game from a non-cooperative one -- which his two predecessors had made it -- to a cooperative one. Indeed, it looks as if he has already done so.

To see who sees it as a non-cooperative game, we have to ask the question: Who sees the other's strategy as given, and then tries to do what's best for him, or who ignores the other completely. That is, who tries to consult with the other before deciding what to do.

Another important characteristic of a cooperative game is that cooperation is enforced by an external agency.

In the case of central banks and governments, this external agency is the financial markets.

Finally, cooperative games don't need assumptions to be made about the bargaining powers of the players. Everything is known. Cooperative games are therefore easier to 'solve'.

This is why Governor Das's job will be easier. Given that he is coming from the finance ministry, he must have a clear idea of how far he can push back and how much he can cooperate.

That is the essence of a cooperative game.

Meanwhile, having become quite familiar with the relations between the RBI and the government since the former was set up in 1935, I can say this with complete confidence: While governments have always viewed it as a cooperative game, RBI governors can and sometimes do view it is a non-cooperative one.

Second, this tendency -- perhaps involuntarily -- became more pronounced after 2013 when Raghuram Rajan, an economist, took over as governor and got accentuated when Urjit R Patel, another economist, succeeded him.

Rajan and Patel didn't have the time to learn the skills needed to manage powerful politicians.

This kind of cooperation corresponds to a concept introduced in 1953 -- yes, that long back -- by an economist called Lloyd Shapley and is called the 'Shapley Value'. It assigns a unique distribution of the total surplus generated by the combination of all players.

The concept is based on the premise that the players will decide to share the gains, which are within reach, if and only if they cooperate.

But everyone also has to contend with some players having more bargaining power, including the power to reduce the surplus to zero. Section 7 of the RBI Act is an example of this.

Governor Das's main problem today is no longer this government. His main problem is the assessment by the next government of the expected gains from starting social welfare programmes that can only be financed by the printing of notes.

Mr Das will have to assess his expected losses in the form of higher inflation.

In other words, the game will shift, once again, to the two players assessing expected gains from financing growth or financing distribution.

The Modi government failed to choose clearly between these two and fell between two stools. But that is another story, for another time.

In the meantime, keep your eye on unfunded deficits. The time may have come for the re-introduction for a new avatar of the ad hoc treasury bills.

Personally, I will judge Mr Das on how adroitly he does so. 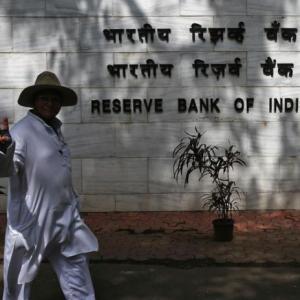