The challenge for politicians is that the continuous electoral cycle favours short-termism and the loan waiver type of policy, whereas prosperity requires hard decisions where commonly held perceptions must be disrupted and over-turned, says Dhiraj Nayyar. IMAGE: Women working at extracting cashew nuts on a farm. They usually get work after the cashew harvest, and when the harvest is poor there’s no work to be had. Photograph: Mahipal Soni / Rediff.com

If farm loan waivers were a solution to agrarian distress, India's farmers would have achieved prosperity long ago. In reality, loan waivers are just an easy palliative, with plenty of good optics, for a political economy that has shied away from fundamental structural reform.

Truth be told, the solution for agrarian distress does not lie in agriculture. It lies in industry. But as long as politics sees the requirements of industry, whether cheap land and power, plentiful labour and affordable capital as antithetical to the interests of India's poor, it is bound to condemn those very people to continued poverty.

The fact is that agriculture's share of India's GDP has fallen over time and will fall further from its current 13 per cent contribution. A high productivity agriculture sector, a feature of any advanced economy, cannot support more than 5 per cent of the country's workforce. India's farming sector supports around 40 per cent.

There are plenty of progressive reforms which can be implemented in agriculture. The abolition of Agricultural Produce Market Committee (APMC) Act would end the monopolies of local traders and help farmers get a better price. A large quantum of investment in irrigation and rural infrastructure would raise yields and aid marketing.

An expansion of the organised multi-brand retail sector can eliminate several layers of middlemen and help solve the conundrum between a low price for farmers and a high price for consumers.

All of these interventions are superior to farm loan waivers which penalise those who actually pay back their loans, do nothing for those who have taken loans from outside the commercial banking system and for those who are not owners of land but work as labourers without assets.

But while necessary, not even progressive reforms are enough to bring prosperity to farmers.

Almost three decades after liberalisation, India seems to have been captured by its own myth that it is possible to leapfrog the manufacturing/industry stage and become a services-led economy even at a low per capita income level.

The changing nature of services, particularly their tradeability (think IT services), may make a services-led strategy sustainable at a macroeconomic level. But it seems to have fallen short in terms of generating enough well-paying jobs for a majority.

The skill-bias inherent in services means that it will never be able absorb the excess labour force in agriculture. The only place for such labour to go is to the informal, unorganised sector in industry which pays little with no benefits. In comparison, agricultural labour may seem no worse.

Evidence from history around the world suggests that it is only manufacturing and its associated activities such as mining and quarrying that are able to absorb low-skilled labour from agriculture into decent paying jobs.

It isn't that policymakers have always ignored manufacturing. The current government launched a Make in India programme which has now been supplemented by an ambitious goal of achieving a $1 trillion manufacturing sector by 2025.

Still, manufacturing's share as a percentage of GDP hasn't budged much from around 15 per cent of GDP since the early 1990s (the share was higher pre-liberalisation).

Of course, the government has made strides in the Ease of Doing Business. It has even raised tariffs for a range of sectors. But while necessary, these may not be sufficient to boost manufacturing and industry at the scale required and in the labour-intensity required. In a globalised world, industry needs a level playing field to compete without becoming inefficient (via protection).

None of the East Asian tiger economies, and China can be added to the list, grew manufacturing without the availability of cheap land in the right geographical location.

The availability of cheap (and often subsidised) power was another critical component of making industry competitive.

And finally, flexible labour laws which made the proposition of hiring thousands of workers attractive is what enabled these economies to grow rapidly while providing decent jobs to the maximum number of people.

In India's case all of these are seen as largely no-go areas for reforms. Any mention of land acquisition for industry is perceived as anti-farmer and anti-poor. Subsiding electricity for farmers (particularly the richest ones who have the largest farms and therefore consume the most electricity) is par for the course as is charging industry higher tariffs to cross-subsidise agriculture. And without hire and fire, employing labour is a losing proposition for industry.

As long as the political economy of India continues to perceive these areas as too risky to reform, industry will simply not scale up. Agriculture will remain over burdened with people.

The challenge for politicians is that the continuous electoral cycle favours short-termism and the loan waiver type of policy, whereas prosperity requires hard decisions where commonly held perceptions must be disrupted and over-turned.

It may be counter-intuitive for politicians but the surest way to solve the problem of agrarian distress is to defy political correctness -- only industry will solve agriculture's problem. 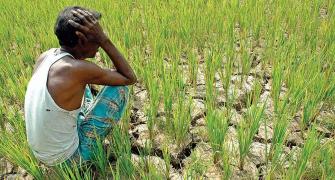 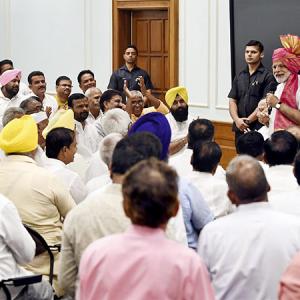