News
Business
Movies
Sports
Cricket
Get Ahead
Money Tips
Shopping
Sign in  |  Create a Rediffmail account
Rediff.com  » News » 'It is the politics of elections. Not the economic politics of farmers'

'I want to ask Modiji is the support price announced by him good enough to make a farmer's sons to start farming in their villages?'
'Can he swear by Bharat Mata and say that is true?' 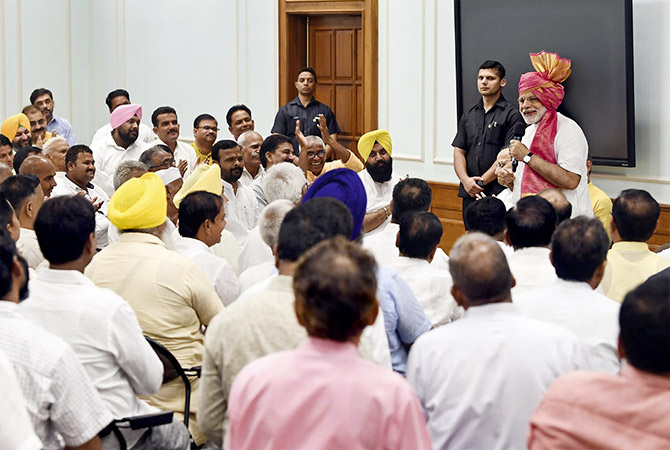 Between March and May, 2018 639 debt-ridden farmers in Maharashtra committed suicide.

"Even if Modi comes to power again, the distress of farmers is not going to go," Vijay Jawadhia, a farmers' leader from Maharashtra and a former Shetkari Sangathna activist, tells Rediff.com's Archana Masih.

There are so many schemes that are announced by the government. Yet none of these measures are able to stop farmer suicides?
What is driving the farmer to take such an extreme step?

These schemes are announced, but they don't reach the farmer.

For example, crop insurance -- we have integrated our economy to a high risk economy which has increased the risk factor in agriculture.

Agriculture is an 'open to sky' sector because climate is not in the control of anybody.

Globalisation has resulted in a lot of market fluctuation, and there is a lot of uncertainty in the farming sector.

A high cost economy has made the farmer put all his money -- from sowing to harvest -- into the earth, the land.

But, in the case of a farmer, there is no guarantee what price he will fetch or if the crop is going to get harvested or not.

That is why insurance coverage is very important for a farmer.

Insurance schemes are announced -- from Manmohan Singh's government to the current Pradhan Mantri Fasal Bima Yojna that is being publicised.

What are the problem with these schemes that we are not talking about?

In Maharashtra, these schemes are implemented at the block level. 100 villages make a block or taluka or panchayat samiti.

If you speak of insurance collectively to farmers of 100 villages, how will it reach them? Because each village gets different amount of rainfall.

If you take the average of 100 villages, and based on that give Fasal Bima Yojana, how can it be justified to the farmer?

I agree that you can't have insurance for individual farmers like in America or Europe who have very large land holdings per farmer, but in India we can at least have it at the village or gram panchayat level, rather than a block of 100 villages.

There is a provision from Manmohan Singh's time and is there today also that it should be village or gram panchayat based, but it should be recommended by the state government.

The Maharashtra state government did not recommended it at that time and the Devendra Fadnavis government is also not doing so.

The farmer is also shying away from this.

Why is the farmer who needs it the most shying away from the government's crop insurance?

In Gujarat the (Rashtriya Swayamsevak Sangh-affiliated) Bharatiya Kisan Sangh has filed a writ in the high court against crop insurance. They say it should not be compulsory.

The Pradhan Mantri Fasal Bima Yojna is compulsory for all farmers who take loans from banks. The premium gets deducted from the bank loan they have taken.

The BKS petition says that even though the farmers don't get benefit, the premium gets deducted. Hence, this Fasal Yojna is not giving any protection to farmers.

What drives the farmers to such despair that makes him end his life?

It has been going on from Manmohan Singh's time and continues till today.

The reason for the suicides is not being addressed.

We told him you waive our loan once, we don't want repeated waivers. We want the repaying capacity for the loan, so that we can repay the loan we take.

He waived the loan and before the 2008-2009 election declared support prices which was more than what has been declared by Modiji.

He increased the support price by nearly 50% compared to previous year.

On cotton, Modiji has increased MSP by 26% to 27% while Dr Singh had increased it by a higher margin.

It was a correct decision by Dr Singh, but it continued for only a year.

When UPA II came to power there was no increase in the cotton support price for 3 years.

Support prices of other crops were also only increased by 5% to 7%. It is all election politics.

But the Modi government has announced an increase in the MSP?

Why is Modiji talking about 50% on support price now? He didn't do this in four years. So how will farmers' suicides stop?

They give speeches that the minimum support price has increased, but the farmer should get that in the market na?

A high cost economy is increasing costs of education and living. All this is adding to the farmer's depression which leads him to taking his own life.

Suicide is the tip of the iceberg.

Agriculture is in crisis.

Why are we in this crisis?

We have integrated our economy with a high cost economy.

Every 10 years the wages of government employees is increased three times but nothing like this has happened to the minimum income of a farmer.

If the minimum income of farmer has to be increased, then grain prices should also increase.

Support prices are higher than the market price today.

If the global markets prices fall, then in the developed countries farmers get a lot of subsidy.

The American budget has a $4.6 billion provision for cotton farmers. They have enough cushioning.

In such a global economy when you are not getting prices and you keep importing, then how will India's farmer survive?

We have to think about giving direct subsidy to our farmers.

We are also tight fisted about levying import duties, but are very smart when it comes to sugar.

Irrespective of the Manmohan Singh or Modi Sarkar whenever there is a glut in sugar, then the import duty is increased.

There is 100% import duty on sugar. We give subsidy on sugar export.

The Manmohan Singh Sarkar gave Rs 5,000 per ton subsidy on sugar export when there was surplus sugar production in the country.

For the buffer stock of sugar we give interest free capital to industries. Why don't we take similar measures for other crops?

In three months, there have been 639 suicides in Maharashtra by debt-ridden farmers. This is shocking.

Cotton and soya bean are the crops that are grown in Vidarbha.

The market was doing well then. That farmer, this year, when cotton yield is less, had to sell for Rs 4,200, so will it not affect his mind?

Since Gujarat had an election, Modiji gave them Rs 500 bonus which made farmers happy.

Maharashtra farmers did not get this Rs 500 bonus.

Modiji is increasing the cotton price now, why did he not do it last year?

If he had done so, farmers would not be in this state.

Farmers marched to Mumbai to make their voices heard, how did that help?

All over India, farmers have many problems.

With great dexterity Modiji has pushed agriculture issues towards the state.

According to the Constitution, agriculture is a state subject, but the reality is that major decisions about agriculture rest with the central government. For example, price.

When you have the power to declare the price, then is it not your responsibly to ensure that farmers are getting that price in the market?

Why are you shoving that responsibility onto the states?

Like Manmohan Singh did, why don't you announce loan waiver for famers in the entire country?

In Europe and America incentive is given directly to farmers, it should be done similarly in India.

How will it work?

Telengana has announced Rs 4,000 per acre direct subsidy each for kharif and rabi. They have started implementing it also.

This is the way out. This will increase their risk bearing capacity. We can debate whether Rs 4,000 is less or more, but this provision is needed.

Modiji should implement this at an all India level.

What is this government's understanding of agriculture?

Modi rode to power on the slogan 'Jai Jawan Jai Kisan'. He said we will give farmers 50% profit, but when they came to power they filed an affidavit in the Supreme Court that we cannot add 50% profit in the support price.

And now they have a new jhunjhuna (proclamation) that in 2022, we will double your earnings.

Modiji sent letters to all chief ministers that the bonus that state governments gave on the support price to buy rice or wheat should be stopped.

Why? The Madhya Pradesh government used to give Rs 150 bonus when it bought wheat. (Chhattisgarh Chief Minister Dr) Raman Singh paid Rs 200 bonus on rice. Why did Modiji stop that?

Before the Gujarat election, Modiji announced a Rs 500 bonus!

He is doing nothing new. It is the politics of elections. Not the economic politics of farmers.

What is the biggest thing that can be done to make life easier for the farmer?

There is no point in just declaring support price, farmers should actually get it.

Waiving their loans is not enough. The economics of agriculture should be positive.

I want to ask Modiji that he has implemented the 7th Pay Commission -- Rs 7,000 salary is now enhanced to Rs 21,000 -- have you increased farmers' or farm labourers wages on par?

Keeping that increase, have you calculated A2+FL? And are you giving 50% price on that?

If farmers are not getting that price, then subsidy should be given to farmers.

Telangana has shown the way and should be followed.

Even if Modi comes to power again, the distress of farmers is not going to go.

The new generation does not want to stay in the villages.

Modiji said at a BJP meeting in Bangalore that the kisan is willing to sell his land so that his son can get a peon's job.

I want to ask Modiji is the support price announced by him good enough to make a farmer's sons to start farming in their villages?

Can he swear by Bharat Mata and say that is true?