'Today the real issue facing the Modi government is not about investment, credit and money supply and all those things economists like to talk about.'
'It is whether your average citizen has confidence in the government not to do something utterly whacky,' says T C A Srinivasa-Raghavan. 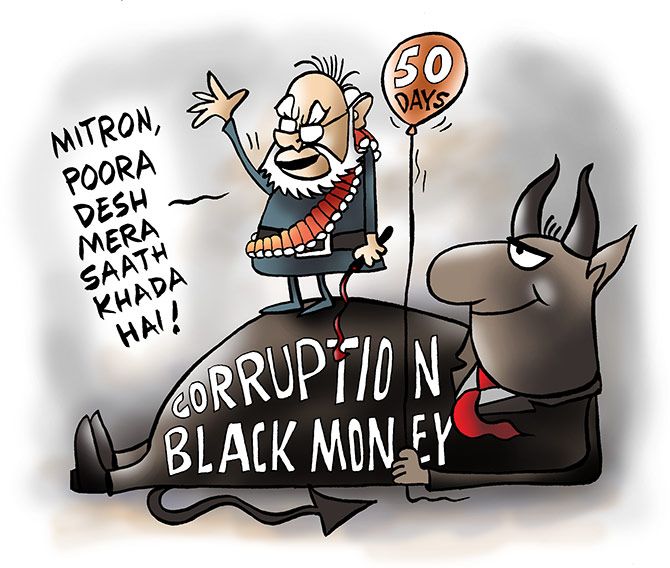 If you have been foolish enough to choose economics as your preferred option for a BA degree, one of the first things you are taught is that its demand that makes the world go around.

The next thing you are taught is that there is a link between prices and quantity demanded, encapsulated in the demand curve.

If price for something goes up, generally demand for that thing goes down. The opposite is also true, generally.

What you are not taught in the first year, however, is that the level of money supply also has a bearing on total demand in the economy.

It can push the entire demand curve up or down, depending on whether it increases or decreases.

The economist in Manmohan Singh, having seen slack demand during 1996 to 2003, understood this perfectly.

His decade in office (2004 to 2014) saw a massive upward shift in the demand curve engineered by a huge increase in money supply. Given the rigidities in India's production, massive inflation ensued towards the end of his term.

Narendra D Modi, when he became prime minister, was forced to push the demand curve back down.

Everything was going very well till November 8, 2016, when Modi suddenly eliminated the entire money supply.

What had gone up slowly over a decade came down with a massive thud in just one day.

Now his government is trying to push it back up. It is not going to succeed in hurry.

This is because shifts of the demand curve depend on one other crucial thing -- confidence in the government's policies.

High confidence shifts it up and vice versa.

But no one is talking about this. This is because the Bharatiya Janata Party is confusing political confidence with business confidence.

Today the real issue facing the Modi government is not about investment, credit and money supply and all those things economists like to talk about.

It is whether your average citizen has confidence in the government not to do something utterly whacky.

P Chidambaram's bravado notwithstanding, he was, in the end, a weak finance minister who was unable to resist Sonia Gandhi.

He aided and abetted her in moving the aggregate demand curve up in the face of a highly inelastic aggregate supply.

In the inflation that followed, the government lost the confidence of the people.

The National Democratic Alliance has almost lost it for the same reason now, namely a finance ministry that is unable to prevent the NDA's Supreme Leader from pursuing strange policies like demonetisation and allowing a committee -- the Goods and Services Tax Council -- to set tax rates.

Who hands over the most precious sovereign power like this?

This is the real problem facing the Modi government. But it shows no signs that it has quite understood this.

It is banging on along the tired old mantras of bank credit and infrastructure spending.

These may be necessary. They are not sufficient.

Meanwhile, the mystery is that while politically confidence in Modi's leadership remains rock solid, economically it has turned to jelly.

The World Bank's thumbs up on ease of doing business will help, but not much. As Mohan Guruswamy said on TV, that thing is about bureaucratic hurdles, not economic policy.

The Modi government now must remove, from the minds of buyers and sellers, the fear of erratic and arbitrary government demands.

This is not going to be easy.

This is because it is not just a matter of reassurances by the political top brass. It is not even a matter of new laws and rules.

It is, above all, about an ill-trained and venal bureaucracy that has been hugely empowered by the Modi government.

Governments make policies, legislatures make the laws to give them effect and our bureaucracy frames rules usually to sabotage both.

But while governments and legislatures get voted out from time to time, bureaucrats carry on.

This is the real message of the World Bank business confidence report. To get a ranking of 50 or under, Modi will have to fix the bureaucracy first. 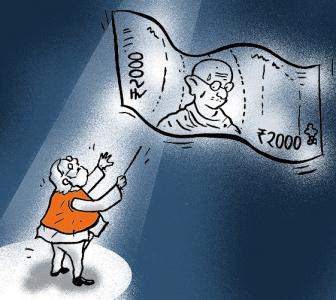 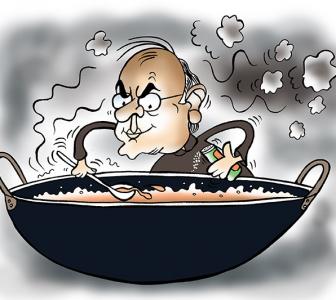