'As he goes down, he will almost certainly drag a few others down with him.'
'Once the mutual mudslinging has died down, collateral damage will probably include more bankers than politicians, given the nature of how things work in India,' says T N Ninan. 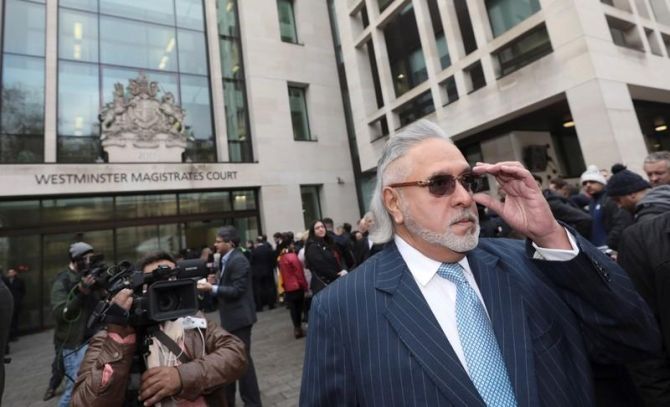 Vijay Mallya has had a penchant for making the news, and until recently he had done it in style.

Early in his career, more than three decades ago, he began with typical flourish, launching a takeover bid for Shaw Wallace, the liquor company.

The bid was in partnership with the then Dubai-based (and now late) Manu Chhabria, and Mr Mallya was picked up at Bangalore (as it was then) airport by the enforcement directorate on a charge of foreign exchange violation.

Later there was a succession of deals -- buying and selling companies, first to diversify and then to re-focus on his core business.

Liquor and beer spew cash in India, so Mr Mallya had a gilt-edged inheritance.

But he also showed an inborn flair for what it took, and enjoyed mixing business with pleasure, presenting himself as the personification of the ad line ('the king of good times') that sold his products.

With the jets and yachts, cricket and Formula 1 teams, villas and vintage cars, an island in the Mediterranean and a horse farm in South Africa, and, of course, Tipu Sultan's sword, it was hard to tell where business ended and fun began.

But behind the glitz and glamour, the 'drinks' business in India has always been as political as sugar or real estate.

All three are regulated by state governments, with liquor excise being a state levy and therefore of special interest to state politicians.

Inter-state variations in excise have provided the incentive for much cross-border smuggling of liquor, especially into states that experiment periodically with prohibition as many states have done at some point or the other -- Andhra Pradesh, Tamil Nadu, Maharashtra, Haryana, Bihar, and, of course, Gujarat.

Naturally, pay-offs are the order of the day.

If ever there was a business made for cronyism, especially at state level, this was it.

Make no mistake about it, he has the smarts -- but his faith in his own cleverness may have encouraged him to play fast and loose.

He must also have a death wish, to risk his best businesses in order to keep funding a bleeding airline long after it had ceased to make sense.

It was typical of the man that he ran it as though costs didn't matter in a business famous for its thin margins.

The bosses of rival airlines laughed privately, waiting for the collapse.

Mr Mallya delayed the inevitable with debt, piled up one on top of the other, issued personal guarantees, and sold one money-making company after another to repay (or not repay) the loss-making airline's debt.

Some of the loans, it has been charged, were also used to salt away money for the rainy day that has come.

He could not have got away with it if bankers did not collude.

And given how most of our banks have been run, only the credulous will think that politicians did not have a hand in things.

So, as he goes down, he will almost certainly drag a few others down with him.

Once the mutual mudslinging has died down, though, collateral damage will probably include more bankers than politicians, given the nature of how things work in India.

James Crabtree, in his recent book The Billionaire Raj, presents a sad portrait of Mr Mallya as a solitary figure in his vast London mansion, decked out (inevitably) with gold taps.

There is all the loneliness of an exile, sans Formula 1 and the parties, and perhaps sans friends too.

Which politician will dare take his call today?

And which banker can he count on?

And yet, he continues to comport himself as an innocent, the injured party who will pull off the impossible, repay the banks and keep the hounds at bay.

Since he had few enemies (he was, after all, the king of good times), there won't be much schadenfreude going around.

In the end, the problem may have been that Mallya never grew up and thought it really was just fun and games.

Businesses going belly up would be something like the movies -- people get killed without any real blood being shed.

He is about to wake up to reality.