'The attempt to build a negative narrative about India's economic performance is disingenuous.'
'For the investors as well as the targeted beneficiaries of welfare schemes, the ground reality is very different,' argues Rajiv Kumar, vice-chairman, NITI Aayog.
Illustration: Dominic Xavier/Rediff.com 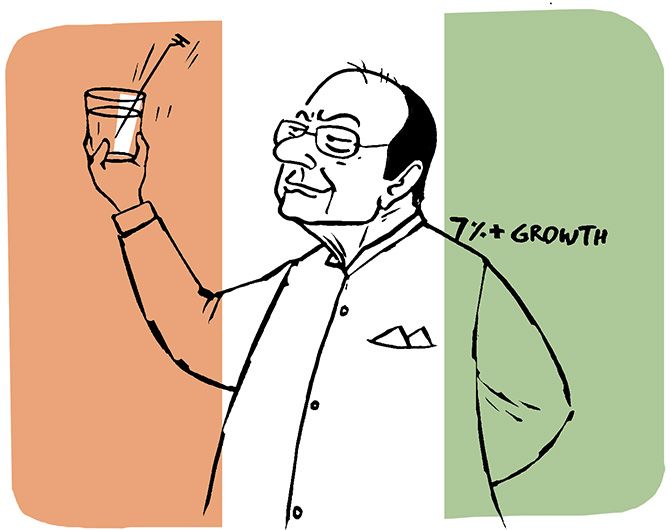 There is an attempt in several quarters at creating a narrative about the weak economic performance over the last five years. This is despite the undeniable fact that the economy has averaged over 7% growth in the past five years, which comes along with perhaps the strongest macroeconomic conditions in any five continuous years since 1991.

Average inflation is about 4%; coming in at 2.57% in February 2019; fiscal deficit has been brought down from an inherited level of over 6% to 3.4% now; current account deficit remains below 3%; foreign exchange reserves above $400 billion and external debt-to-GDP ratio at below 25%.

Public sector banks have finally come out of the crisis with the government pumping in nearly Rs 3 trillion for their re-capitalisation.

As a result, growth of non-food credit from commercial banks to industry and infrastructure has finally started to accelerate after declining for more than six years until March 2017.

Commercial bank credit to the Micro, Small and Medium Enterprises sector has increased by a whopping 19.6% (until January 2019, annualised). It was in negative territory both in FY 16 and FY 17.

FDI inflows have risen to $62 billion in FY 18 and are maintaining that pace in FY 19. These numbers certainly do not reflect India as a flailing economy as some would like us to believe.

The naysayers may well question whether this significant growth accompanied by macroeconomic stability translated into better living conditions for those at the bottom of the pyramid.

Here, the government's case becomes even stronger, spanning physical, financial and social infrastructure: 1.94 lakh km of rural roads completed; 13.7 million houses in rural and 5 million in urban areas constructed; 100 million toilets have been built; 310 million Jan Dhan accounts opened, currently holding deposits of more than Rs 18,000 crore; almost 140 million beneficiaries enrolled under subsidised insurance schemes; for the first time, all those earning less than Rs 15,000 per month are being brought under a social security net; and 70 million women have been given gas stoves with cylinders.

It is learnt that that the incremental rate is already approaching 50,000 patients per month, which implies that all potential beneficiaries are effectively covered and have necessary information in less than half a year of implementation. This is unprecedented.

These are hard facts that point to the unwavering resolve of the government in setting challenging targets, ensuring effective implementation, thereby achieving inclusive growth.

Yes, it is, of course, true that the economic performance could have been even better. In my own view, India's growth potential is appreciably higher than the average 6% to 7% achieved since 1991 (which was significantly lower in earlier decades).

Over the decades, inefficiencies and slack have become embedded in practically all dimensions of the economy as a result of poor governance, over regulation and rent-seeking behaviour that has stymied private entrepreneurship and innovation.

Some of that is being addressed through extensive digitisation of government services; rationalisation of certification requirements; and further liberalisation of licensing and permit procedures. But in some areas there is still work to be done.

Agriculture sector modernisation is one such area, which could result in an extra point of GDP growth. With the stabilisation of the GST regime by the end of its second year in July 2019, new growth impetus is sure to be generated.

But let me dwell on an area that could have significant growth enhancing potential by lowering the costs of capital in the economy and whose importance may not be evident to many. This is the issue of more efficient management of the country's public debt.

Given the focus of global credit rating agencies on public debt, this results in lower credit ratings for India, four to five notches below that of China. This implies costlier debt and higher real costs of capital, which adversely impact investment activity.

However, it is worth noting that in China household debt-to-GDP ratio was about 50% in 2017 (IMF data) and total private debt is around 206% of GDP.

In India, quite inexplicably, household debt is a mere 11% (all figures refer to 2017) and private debt barely above 50% of GDP.

A better debt management strategy would surely shift some of the central and state government debt to municipal bodies, public sector entities and households and encourage the private sector to borrow larger volumes and drive growth.

With the resultant decline in government debt-to-GDP ratio, India's credit ratings will improve and result in a decline in capital costs spurring investment activity both by corporates and households.

By enacting the Insolvency and Bankruptcy Code and setting up the National Company Law Tribunal process, the government has also helped unlock vast amount of capital locked in defunct projects.

More than Rs 3 trillion worth of assets have been resolved, thereby further augmenting the supply of capital in the economy.

As the process gathers pace and exit is facilitated, it would help to increase supply of investment funds, resulting in lower capital costs, giving a further lift in the coming years.

It should be clear that the attempt to build a negative narrative about India's economic performance is disingenuous. For the investors as well as the targeted beneficiaries of welfare schemes, the ground reality is very different.

No doubt then that investment banks like the Goldman Sachs and others are raising India's weight in their portfolio.

So the economy may well be entering a Goldilocks period on the back of high rate of growth combined with macroeconomic stability, extensive structural reforms and good governance.

Rajiv Kumar is an Indian economist. Views are personal.