News
Business
Movies
Sports
Cricket
Get Ahead
Money Tips
Shopping
Sign in  |  Create a Rediffmail account
Rediff.com  » Business » How to get banks to restart lending to corporates

Let all the stakeholders, especially the government, remember that if the Make in India lion needs to roar and rise again, it won't happen unless India Inc rises too, points out Shekaar Subramanian. 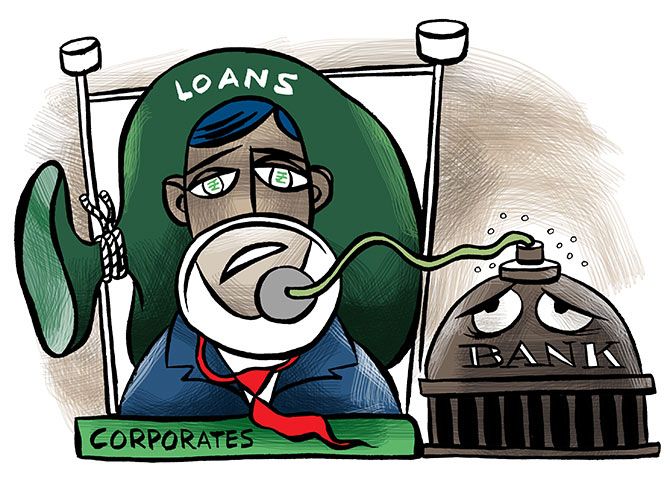 Lend a small amount and your borrower needs to worry, whereas lend a large amount then you have to worry -- this has been a common adage in banking circles.

Banking, as per me, has always been an art as well as a science that carefully needs to be balanced, analogous to the yin yang theory lest one aspect overshadow the other thereby resulting in chaos.

The art part of banking practice deals with the aspect of lending principles, negotiation skills of the lender with respect to garnering a risk-adjusted favourable coupon/interest rate for the bond/loan combined with decent fee generation and, most importantly, reading the cues being given by the promoter/company.

It all boils down to how well the acumen of the lender is at play during the process of dealing with the borrowing entity.

Whereas the science part deals with the rules and hard facts pertaining to financials, ratio analysis, spreadsheet modelling and, most importantly a watertight documentation which bears the stamp of legal satisfaction to the largest extent possible.

It is no secret that since the last couple of years or more, bankers and every other sort of official lender in the country had taken a one-sided, partial view of the borrower set.

Bankers in general seemed to suddenly impart an over-emphasis and extremely obsessed priority to retail loans vis-à-vis corporate/wholesale banking, courtesy some corporations being run by tainted promoters which were overleveraged to the hilt and were driven into the ground by their respective masters, leaving nothing but a big hole in their balance sheets.

Many banks, especially the PSU (Public Sector Undertaking) ones, were put under PCA (Prompt Corrective Action) by the Reserve Bank of India for their credit underwriting actions that witnessed many large loans going down the drain and subsequently had to be referred to the IBC (Insolvency & Bankruptcy Code), whereas some banks took the alternative route of selling the same at a huge discount to some of the ARCs (Asset Reconstruction Companies).

The effect, unfortunately, being that the banking community at large decided to paint most of the corporate canvas with the same brush and hence for the wholesale banking sector, especially with regards to smaller and medium sized borrowers, suddenly became a pariah of sorts.

As per a recent study conducted by IIM-A, the major shift to household credit by banks, thereby condensing their corporate loan portfolios, exhibits a general risk consensus to avoid lending to mid-large corporate borrowers.

Over the past few years, wholesale lending has decelerated considerably to a glacial pace, flowing only to the top-rated corporates.

As can be gleaned from the RBI numbers, less than 0.3% of the top corporate borrowers account for more than 40% of all the credit outstanding disbursed by banks.

The other side to the story being that more than 95% of the not so large corporate borrowers account for a little more than 22% of the loan pie disbursed by banks, thereby showing a big chasm of sorts.

Furthermore, over the years, many large banks became retail heavy, with focus on sectors like infra and other capital guzzling industries taking a backseat.

As per Bloomberg data, looking at the loan mix of some prominent banks, in FY 2015 SBI had a wholesale exposure of 57% and the same dropped to 50% in Q2FY20 with retail's share increasing from 52% to 60% over the same period.

The other banks were also exhibiting a similar trend. For example, Axis Bank's wholesale exposure in FY 2015 was 45% and the same declined to 36% in Q2FY20 (with retail shooting up to 64% from the previous 54%), whereas HDFC Bank's exposure to the wholesale sector segment saw a decline of 3% (from 51% to 48%) during the period from FY 15 to Q2FY20.

While the shift of gears from wholesale to retail might also be attributed to the change in managements of a few banks mentioned above who steered their ships with their own newfound strategies, nevertheless banks still continue to hold a decent mix of both wholesale and retail segments.

However, the tectonic shift in the overall banking sector leading to the overreliance on retail loans by many of the bankers, NBFCs et al over the last few years cannot be ignored.

Part of the problem was also the stressed sectors like power, project finance etc which were languishing in IBCs.

In general, the consensus in the banking community seems to be that the reason for the overreliance by many of the lenders on feverishly building up retail portfolios was the logic that with the amount spread over a large base of heterogeneous/mutually exclusive customers, the risk of default on the entire credit portfolio outstanding would be minimal.

However, come COVID-19, this theory too got debunked.

Make no mistake, COVID-19 doesn't distinguish between a retail or a corporate borrower and neither does it discriminate between low and high credit scores, it just goes about dispassionately doing what it is destined to do.

The same manifested in panic buttons being pressed across the board in order to salvage the portfolios now that the virus had neutralised the distinguishing risk metrics and had become an equaliser of sorts.

The point worth pondering here is that any lending institution should avoid over-reliance on any one segment or a product and instead formulate a fluidly balanced blend of credit that not only takes into account stability in the form of retail credit, but also wholesale credit that imparts the much needed profitability to the bottom line in the form of fee incomes and spreads.

This is a simple case of the science of banking overshadowing the art of banking where stress scenarios of various wholesale borrowers were allowed to act as a feeder example to discourage onward lending.

The other actor in play was the reluctance of the PSU banks in undertaking either fresh credit disbursals to prospective mid-sized or even larger corporations, or initiating restructuring as per RBI provisioned norms. This created a perfect catch-22 situation in the system.

The system needed the cash injection, but didn't look too decked up in the scientific lens of banking for it to be deserving of any disbursements; on the other hand, for it to be an attractive bet it had to have a good amount of credit support.

One of the main reasons for the reluctance of PSU bank officers to chart the journey towards fresh disbursements/restructuring is the prevalence of the PCA (Prevention of Corruption Act) which can be draconian in terms of killing whatever rescue efforts are required by the banker to be taken.

No PSU banker would be willing to sanction a large loan under the fear of getting hounded by authorities later if the loan is not repaid owing to promoter mismanagement concerns or if the promoter falls out of favour with a change in political leadership at the top.

Even the eminent jurist Harish Salve batted for the removal of public bank officers from the purview of the PCA.

Another move if planned well by the Indian bankers which can bode well would be filling in the space vacated by the foreign banks.

With the world undergoing rating revisions, India too would not be spared. Case in point being the downgrade effected on India by Moody's. This opens up opportunities where foreign banks are compelled to jettison their quality grade of corporate holdings (loans and bonds), which can be purchased by the Indian lenders.

This gets a shot in the arm with the recent Reserve Bank of India regulations that allowed an increase in a bank's exposure to a group of connected companies from 25 per cent to 30 per cent of the eligible capital base of the bank, albeit temporarily.

Let all the stakeholders, especially the government, remember that if the Make in India lion needs to roar and rise again, it won't happen unless India Inc rises too.

Shekaar Subramanian is Head of Structured Finance at a bank-owned NBFC. The views expressed are personal.