While the widespread feeling is that employment growth has been sluggish, some argue that, since sabka vikas slogan will most probably not deliver, Mr Modi and the BJP are going in for an unambiguous strategy of Hindu consolidation, says Subir Roy.

How has the National Democratic Alliance government delivered on the promise of sabka vikas (inclusive growth) that is widely considered to have brought Prime Minister Narendra Modi to power in 2014?

This is important as the Bharatiya Janata Party (BJP)-led government is near to completing three out of its five years in office and shows signs of having already got into a pre-election mode so as to prepare for the parliamentary elections due in 2019.

Inclusive growth or development foremost changes people’s lives in two ways -- higher incomes for those with jobs and, more importantly, jobs for those who do not have any. The widespread feeling is that “employment growth has been sluggish”, as acknowledged in the Economic Survey (2016-17).

Thus, those with jobs have been the full or unequal beneficiaries of the year-on-year rise in per capita incomes in step with the 7 per cent plus growth in gross domestic product (GDP).

But here also, rising incomes have not translated into greater wellbeing in equal measure because there has been a secular deterioration in the quality of employment (going back to the United Progressive Alliance, or UPA days and continuing), with both the private and public sectors preferring to employ temporary hands who have no job or social security.

In the run-up to the global financial crisis of 2008, the Indian jobs scene was marked by three positives. A booming construction sector was able to absorb out migration from agriculture which pushed up farm wages and resulted in better incomes across the working class (farm and non-farm).

The period was also marked by healthy exports growth in which textiles, a significant job creator, played its part.

As for the middle class, it appeared to have found a long-term sweet spot in new jobs being rapidly created in software and services (IT/BPO). Two employment-intensive sectors which accounted for virtually the entire growth in jobs in December 2015 over the December 2014 were textiles and IT/BPO.

The current scenario is that neither construction nor textiles is carrying the can for growth and therefore jobs.

What is more, the IT/BPO sector is in the throes of a crisis. The rapidly expanding use of automation and artificial intelligence have led to a sharp reduction in staff intake by IT/BPO companies.

Hence, there is now a non-linearity between growth and hiring, with hiring growth lagging behind topline growth. As if this was not enough, the heyday for start-ups when they were finding a seemingly endless stream of venture capital is over.

So start-ups which typically offered higher order IT/BPO jobs are downsizing. Bengaluru today is full of techies who are either in-between jobs or have settled for significant compensation cuts in new jobs after being made redundant earlier.

If the travails of the IT/BPO sector are not of their own making, then the havoc that demonetisation has wrought on the MSME (micro small and medium enterprises) sector has been entirely the Modi government’s handiwork.

Knowing that this is where most of the jobs which will absorb rural migrants to cities are to be created, the government set up Mudra as an important facilitator.

But demonetisation ruined the party that might have been. It disrupted supply chains and disoriented small units which dealt mostly in cash and whose owners post-demonetisation either fobbed off their workers with old Rs 500 and Rs 1,000 notes of simply downed shutters.

Workers, many of them migrants, first discounted their wages at the local kirana shops for essentials and then when both job and money ran out, went back home.

The severe disruption and hardship that this caused for several months among the working poor has been anecdotally reported and pooh-poohed by the government. It remains be seen how this shows up in official statistics over time.

Against this scenario we have the prospects of a healthy 4.4 per cent growth in agricultural GDP in 2016-17. To what extent this will catalyse inclusive growth in the countryside is not known but newspapers have been full of report of farmers’ distress over the arrival of bumper crops leading to a crash in produce prices.

A season of farm loan waivers has begun in Uttar Pradesh (UP) and is likely to move to other states. Even the government does not appear to believe that a booming agriculture will take development forward.

Some argue that, knowing that the sabka vikas slogan will not deliver, Mr Modi and the BJP are going in for an unambiguous strategy of Hindu consolidation. It began with the campaign for the UP assembly elections and may have yielded a winning formula to be pursued for the next two years. 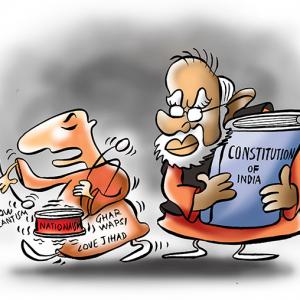