Gold collapse sets up market for deep correction in commodities

The best part of the collapse in the price of gold [bullish for India on its own merits] was in what it says for commodities in general but for crude in particula, says Sonali Ranade

The big story of the week was gold.  This blog has been expecting a price collapse in gold for weeks now. It came with a bang last Friday when gold made a low of $1476 before closing up at $1501. The recovery in price was technical. The correction in gold is far from over. In fact, we may have launched into a mega-bear market for gold. The next few weeks will tell us how the situation in gold resolves itself.

The best part of the collapse in the price of gold [bullish for India on its own merits] was in what it says for commodities in general but for crude in particular. I am loath to examine fundamentals as my writing is about technicals. Nevertheless, as I have noted for a long time, crude has been a holdout in the general commodity correction despite the well known price pressures from shale, declining US imports and the correction in copper in China.

Hence my sense that crude is being set up for a price bust on an impressive scale. I expect crude to test $89 to $84 in the next few weeks but, more importantly, for crude to signal a mega bear markets that could last years. That’s immensely bullish for an oil importer like India. The price trends in the ensuing weeks should resolve the picture.

Elsewhere, the EU markets continue to correct. So does China. Nearer home Nifty is on course to test its long-term bull market support trend line since 2003 in the 5300/5400 area. Currency markets were largely placid but are due for some fresh moves. The counter-trend EURUSD rally may have exhausted itself.

The DOW Transports have been making lower tops since the middle of March. It could be a bear trap but is a warning sign that we are approaching a top in the US markets. A collapse in commodity prices, as expected, could give the US equity rally some more steam. On the charts, the extended rally has a few more twists and turns.

Time to be very cautious but opportunities for bears and bulls abound. Can’t complain about lack of tradable volatility! 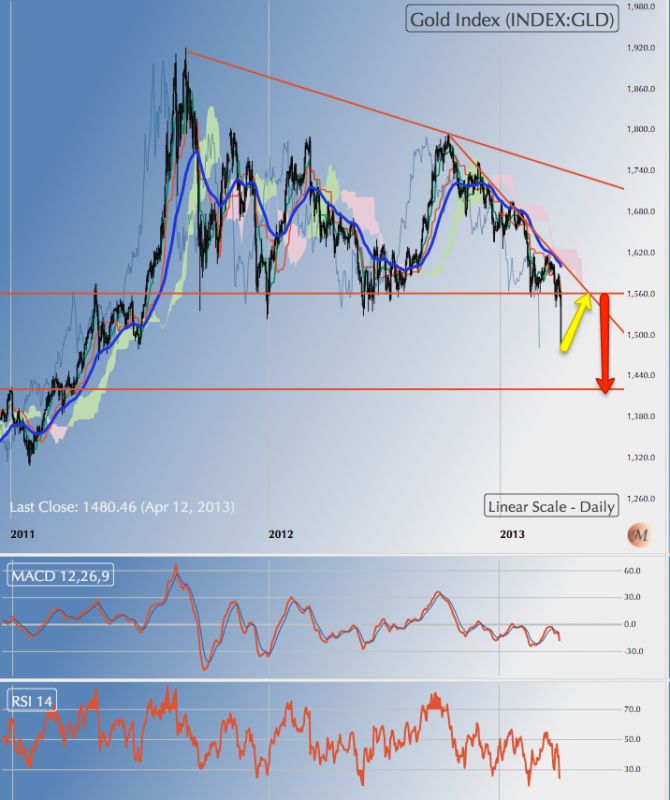 Gold: Gold price collapsed dramatically last Friday, closing the week at $1501.40 after making a low of $1476.

With the price collapse below $1525, gold transitions into a long term bear market unless we see an immediate price reversal over 1550 in the next few days -- an unlikely event.  The last bear market in gold lasted 22 years. So it is advisable for long-term investors not to rush to buy and wait for some sort of stability in the market. My sense is that we have not yet seen a bottom to this price collapse.

On the other hand, gold can drop to $1425 even before it tests the $1550 as the new overhead resistance. Shorts should look for opportunities to cover below $1476. 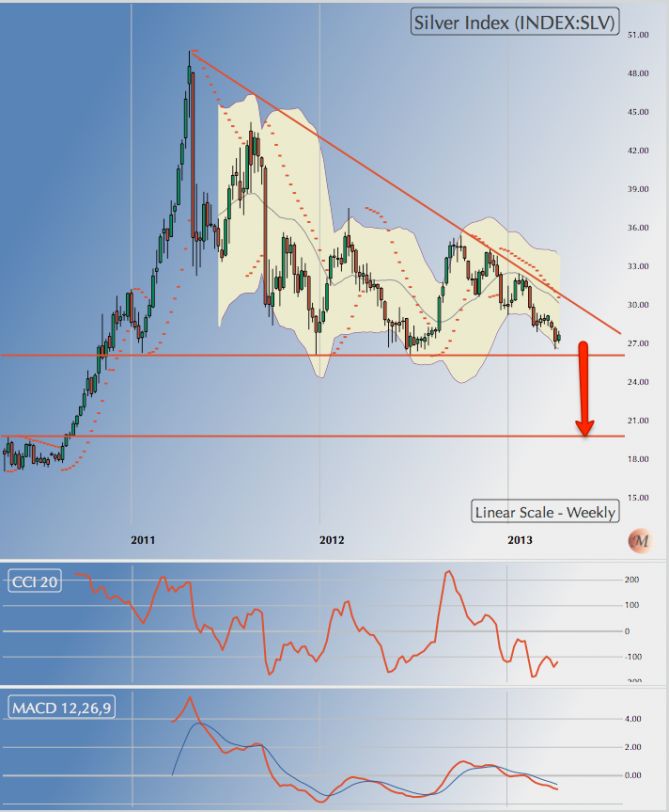 The worst in silver is yet to come and is probably around the corner. Silver has no worthwhile support below $26 all the way $20. The price collapse in silver won’t be as shocking as that in gold but just as furious. Don’t bet on $20 support holding in the collapse! 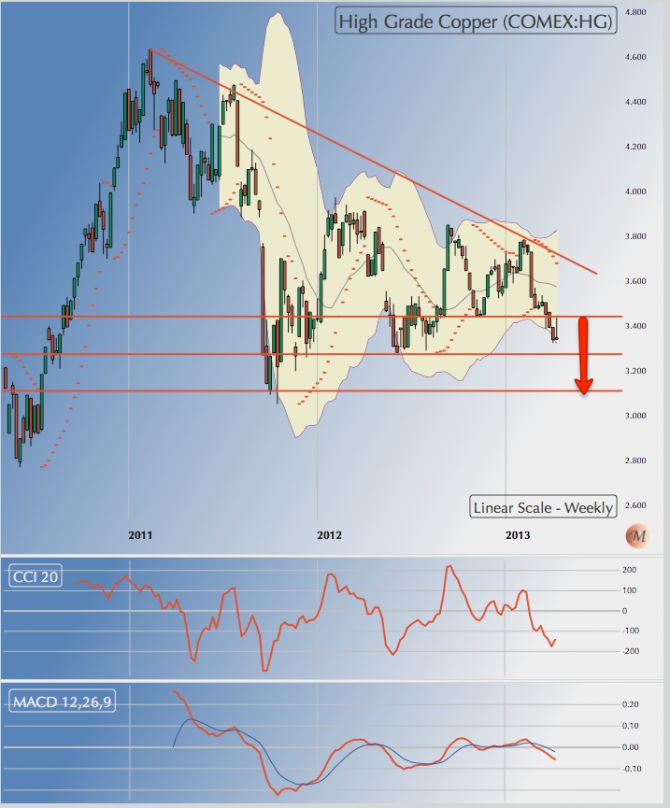 HG Copper: Copper closed the week at 3.35 after making a high of 3.45 during the week. Copper has led the fall in commodity prices. It spent most of last week testing the old support at 3.45 as the new overhead resistance. My sense is that cfopper will test 3.25 in the next few weeks. The correction is far from over. 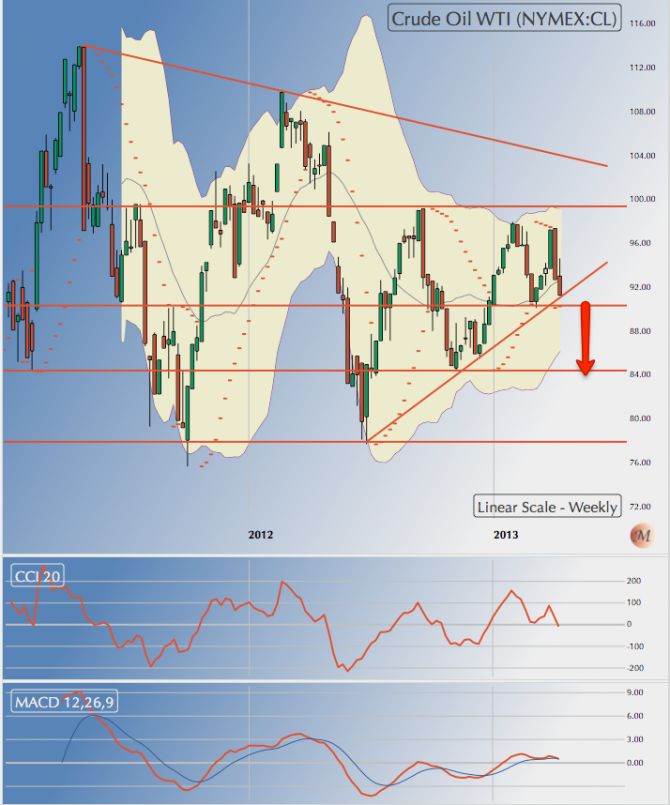 This is a god-sent opportunity for India to push through a complete restructuring of its oil sector eliminating all controls. Let us hope politicians grab the opportunity. The decline in crude prices may last for years, but that can be confirmed only after we see market’s reaction to crude in the $80 area. 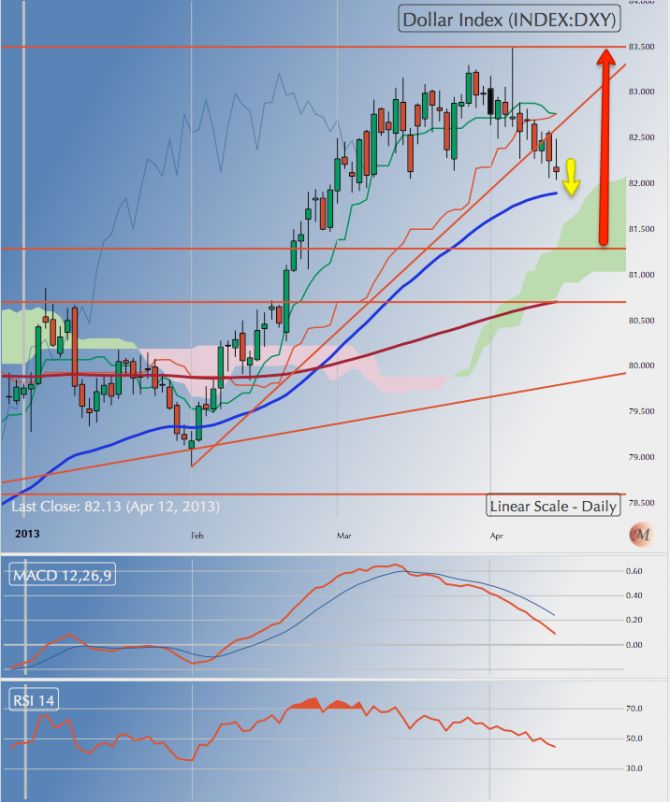 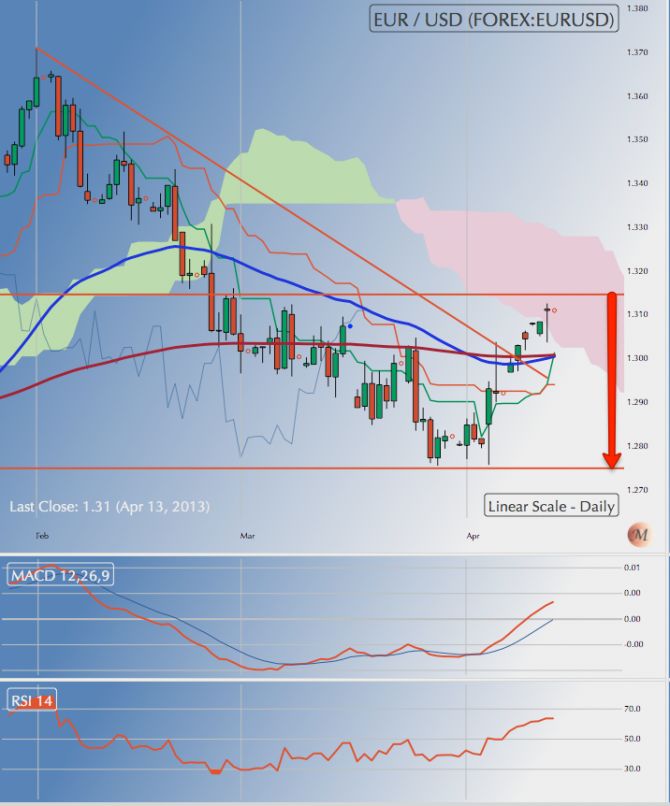 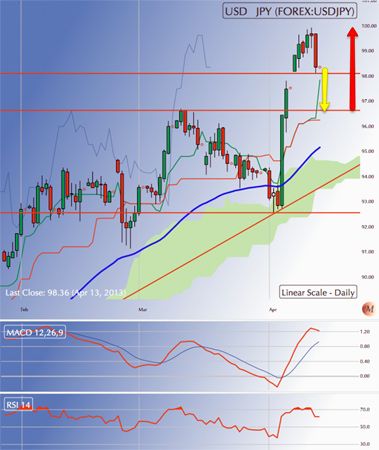 Long term I remain bullish on the $ which is clearly coiling up for a decisive move one way or the other. I favour the move up. If you are a dollar bull, a strict stop loss at 53.50 may be advisable. 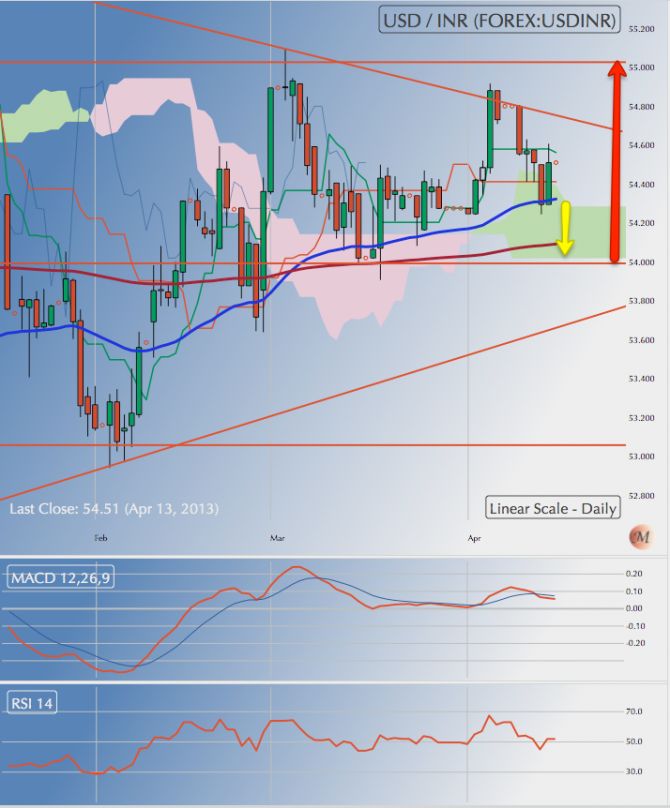 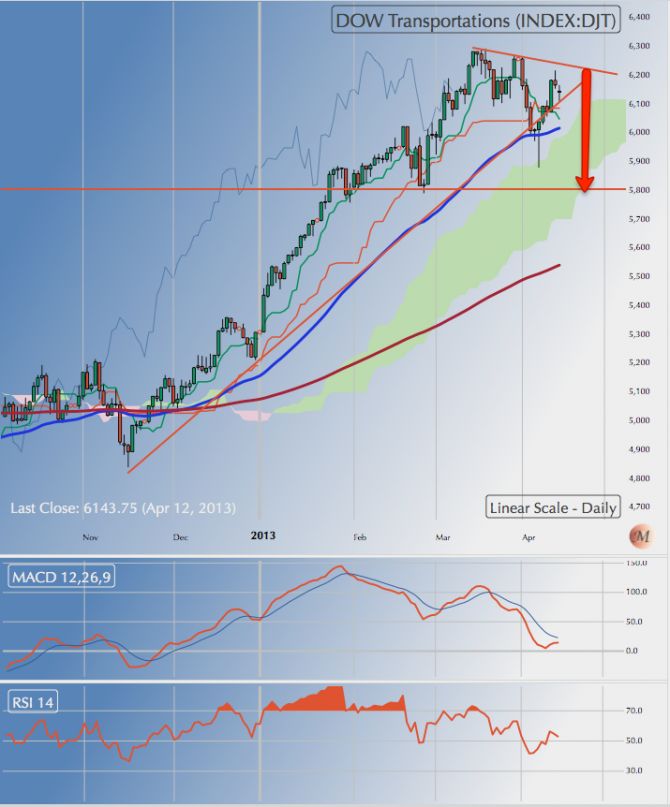 DOW Transports: The DOW Transports [$TRAN] tracks the goods transportation sector in the US and is often used to track the markets along the DOW according to the DOWV theory.  $TRAN is not entirely reliable but often flashed early warning signals for the main Index.

$TRAN went into a decline from the double top of 6291.74 on March 19 and made a low of 5882 on April 5. On a rally from there it made a high of 6215.90 which id the third lower low from the double top in March. Unless the $TRAN makes a new high early next week, the Index is clearly signaling an intermediate correction in divergence with the DOW. 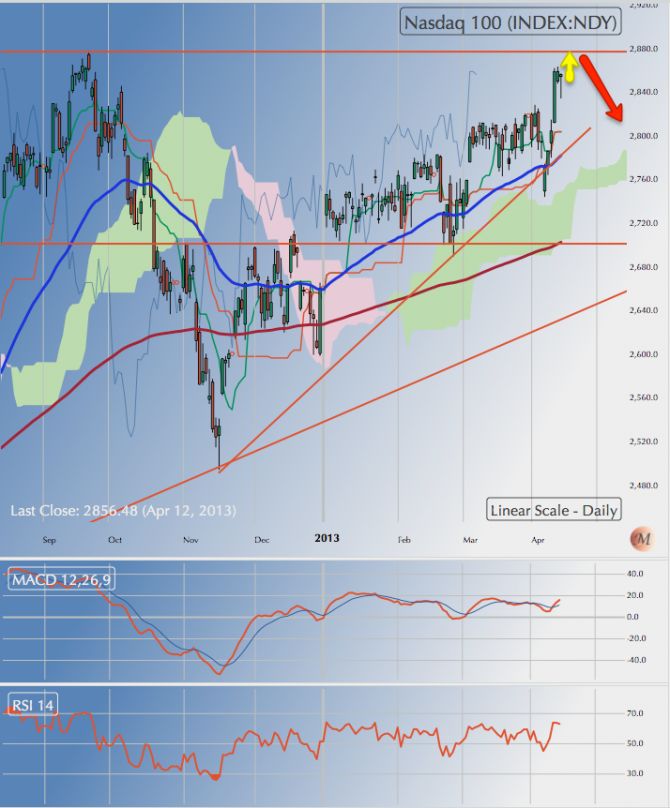 Nasdaq 100: The Nasdaq 100 made a high of 2863.66 during the week and pulled back from support 2832. The index has support at 2805, which also is its 20 DMA. Nasdaq 100 clearly intends to test its overhead resistance at 2877, which is the head of a large inverted S-H-S pattern. It will not be an easy resistance to take out. Failure to do so will not signal a crash from there as such important resistances get taken out after several attempts.  Nevertheless, expect a pause in the rally there. 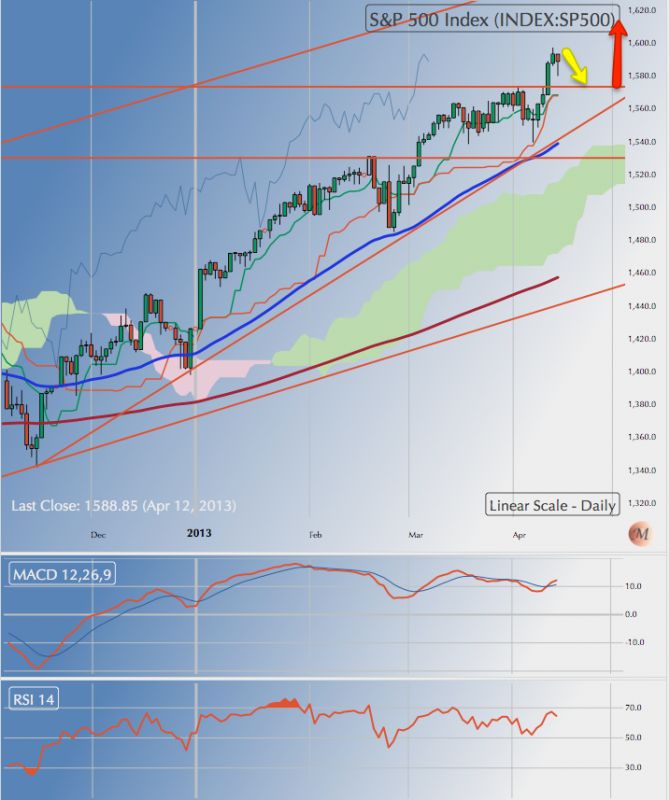 S&P 500 [SPX]: The SPX closed the week at 1588.85 after making a high of 1598.23 during the week. First support lies at 1570. The divergences on the price ROC oscillator are getting more and more pronounced and volumes are thinner and thinner. A short correction in the SPX is about due in terms of time. This could test the 1550 support offered by the 50 DMA. But there is no sign of reversal yet & the rally has time to run in terms of extended wave counts. Not a time to be buying into the market though.

NSE NIFTY: The NSE Nifty continued its decent towards the 5300/5400 area where it meets its long-term trend line running up from 2003 onwards. The fall was accentuated by a price collapse in INFY following poor revenue growth guidance. InfoTech had been a hold out in this correction along with the FMCG sector. Expect the FMCG sector to begin its own correction some time next week. 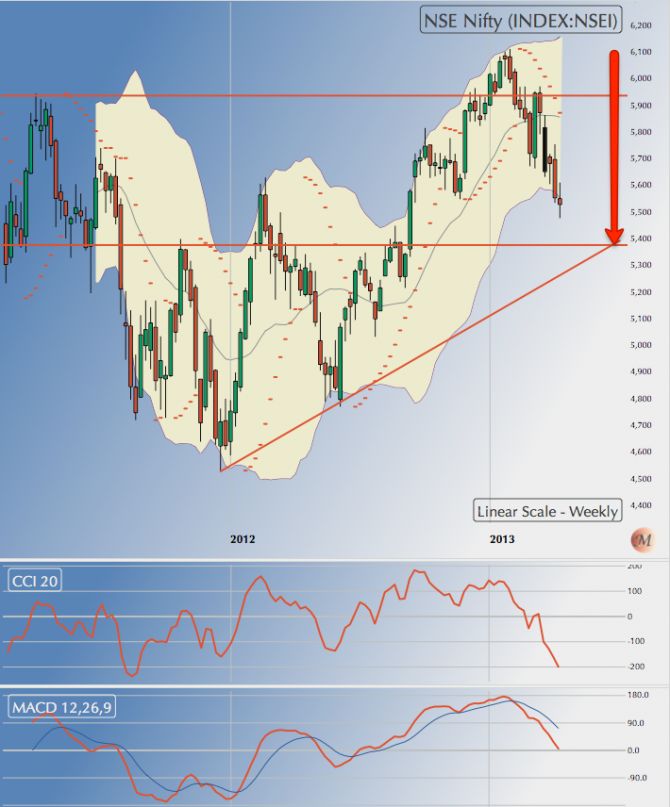 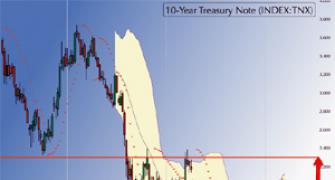 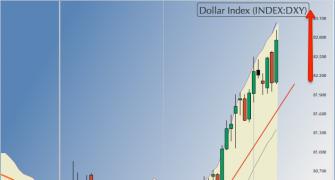 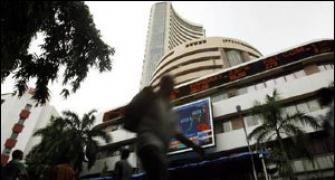 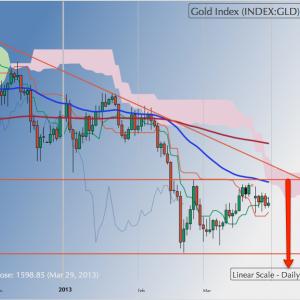 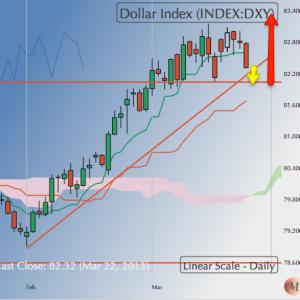