News
Business
Movies
Sports
Cricket
Get Ahead
Money Tips
Shopping
Sign in  |  Create a Rediffmail account
Rediff.com  » Business » Demonetisation: It's a monumental disaster in the offing!

'To print and replace 24,023 million notes is an enormous challenge considering the sheer volume of notes to be printed and capacity of our printing presses.' 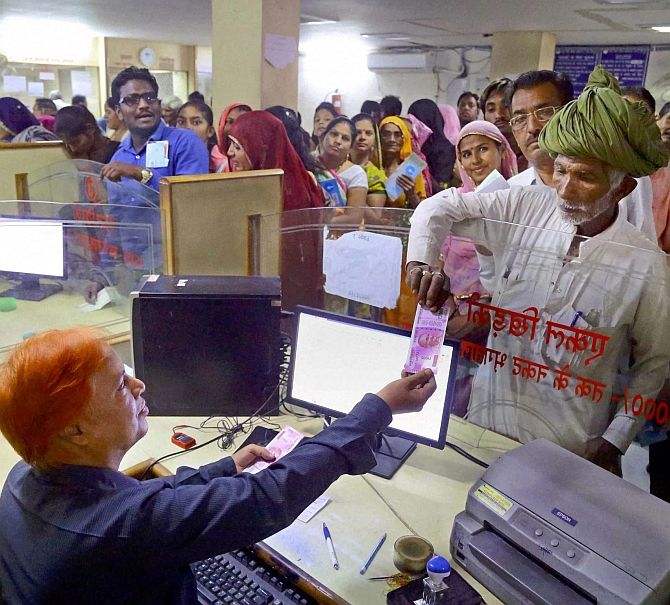 James Wilson has been tracking the demonetisation drive since it was announced by Prime Minister Narendra Modi on November 8.

During his investigation, he tracked down discrepancies in the policy and the subsequent statements by the government and the Reserve Bank of India. He posted his observations on his blog titled 'Decipher the Demonetisation'.

With Wilson's kind permission, Rediff.com is sharing his views with our readers. The first of a two-part column"

High denomination notes of Rs 500 & Rs 1,000, which comprise 86.4 per cent of the total currency in circulation, ceased to be legal tender due to demonetisation policy announced on November 8.

The Reserve Bank of India denotes these demonetised notes as 'Specified Bank Notes' or SBN.

Exact information on the amount of SBN as on November 8, 2016 is now in the public domain, thanks to a query raised in the Rajya Sabha by Congress leaders T Subbarami Reddy and Ambika Soni.

To print and replace 24,023 million notes is an enormous challenge considering the sheer volume of notes to be printed and capacity of our printing presses. 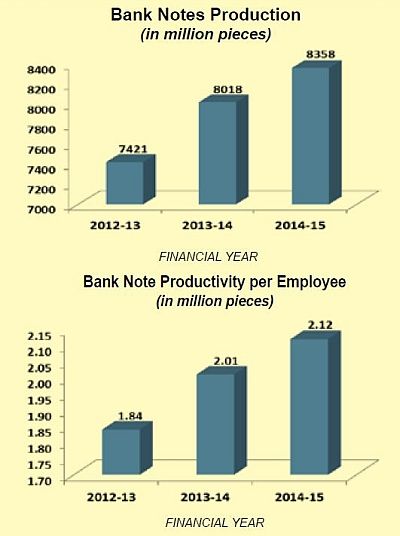 So then how can the RBI achieve this target with resources at its disposal?

How much time will the RBI take to print and replace SBN with new notes?

To understand this, in a pure resource management perspective, we have to examine the output capacity of our currency printing presses.

In terms of capacity of the units under SPMCIL, according to SPMCIL's annual report (see graphic), the Nashik press can print 5,800 million (580 crore) notes per year while the Dewas press can churn out 2,620 million pieces in the same period.

My next exercise was to understand whether we can outsource currency printing to any high-quality security presses abroad.

That research led me to the Report of Committee on Public Undertakings (2012-2013) which deliberates 'outsourcing of printing of currency notes' as recommendation no 14. Selected extract from the report is reproduced here:

'The committee also find it pertinent to point out that during printing of currency notes worth 1 lakh crores in three different countries, there was always a grave risk of unauthorised printing of excess currency notes, which would have been unaccounted money. The committee simply wonders how come a decision was taken to have the currency notes printed by above mentioned companies in three different countries. Logically speaking since all the said three countries are well developed, each country certainly had the capability of undertaking the entire printing assignment.'

'In any case the very thought of India's currency being printed in three different countries is alarming to say the least. During that particular fateful period our entire economic sovereignty was at stake.'

'The committee is concerned of the grave implications of such a move as it has wider ramifications in a multi-faceted angle. The danger of destabilising the economy by the agencies of authorities who could have misused our security parameters vis-a-vis printing of currency notes, the use of such notes which could have been printed in excess could easily have fallen in the hands of unscrupulous elements such as terrorists, extremists and other economic offenders, looms large in our minds.'

'The committee expresses its strong resentment over such an unprecedented, unconventional and uncalled for measure.'

'The committee while recommending that SPMCIL be strengthened to undertake the printing and minting of the required currency notes/coins fervently emphasise that outsourcing of printing of currency notes/minting coins should never be resorted to in the future.'

To this the government replied, 'Since corporatisation, SPMCIL and BRBNMPL have been meeting the requirement of coins and currency and no import has been resorted to.'

'The concerns and recommendations of the committee have been carefully noted for future guidance.' (Ministry of Finance, Department of Economic Affairs) (O.M No.3/8/09-SPMC dated 3rd January, 2013).

So this assurance rules out the very question of outsourcing of the currency printing abroad.

I do not think the RBI will violate an assurance given to Parliament's Committee of Public Undertakings. Hence, it has to depend on the four presses in our country to meet this enormous demand.

In this context, we have to note that during the demonetisation exercise in 1977-1978 only less than 5 per cent of the high-value notes were demonetised.

It is also important to note that the Rs 100 note, which was 50.1 per cent of the total currency in circulation was not demonetised during 1977-1978.

Contrary to the above, this time the RBI and the government decided to demonetise the Rs 500 note, which consists of 47.8 percent of the value of the total currency in circulation.

They also demonetised the Rs 1,000 notes thus making 86.4 per cent of value of total currency in circulation redundant, which choked and paralysed the entire cash-based economy with a whimsical direction overnight!

But there is a catch!

The RBI has to tweak the ratio between the Rs 500 and Rs 2,000 to provide easy change and mobility between these two notes.

Definitely, this is a short-shrift exercise without considering the much-needed mobility and velocity of the demand of these various denominations of currency notes in circulation.

The elimination of Rs 1,000 note and introduction of Rs 2,000 note is really perplexing and the RBI's explanation has turned them a joke.

One glance at an RBI study titled Modelling Currency Demand in India: An Empirical Study reveals how the central bank and the Union government all along resisted the issuing of high denomination notes even when warranted in a short time for inflation control, considering the chances that this high denomination currency will be used for hoarding purpose by the black money holders.

So, it is ironic that the high value currency note of Rs 2,000, which has been introduced in the guise of controlling the hoarding of black money, at the end of the day, helps the hoarders in transporting and hoarding!

This hasty and irrational decision was taken without considering the statistical principles of distribution of various denominations in the currency in circulation and also fully sidelining the prudent decision to eliminate the chances of hoarding.

This short shrift route of going for the Rs 2,000 note without considering any of the above consequences into account and only taking the ease of printing, is a telling reflection of how an institution like the RBI let itself erode its independent stature to please the political masters!

I discarded here the essential tweak required for maintaining the equilibrium between Rs 500 and Rs 2,000 notes, and also the increase of currency required to meet the demand of cash in the economy in the coming months till this disaster is mitigated.

Many government sympathisers may definitely point out that the entire Rs 15.44 lakh crore of SBN will not return into the system and that there is no need to replace the entire currency.

My opinion is that these two factors balance and neutralise each other. Hence for the time being, I decide to go ahead with the figure of 20,594 million new notes as our target for printing.

In the initial days, the WhatsApp army was busy forwarding daring claims that only 50 per cent SBN would return into the system. Even our attorney general told the Supreme Court that the RBI and the government expected only a maximum of Rs 12 lakh crore of SBN to return to the system.

Today, we hear media reports quoting the finance ministry that SBN worth around Rs 14 lakh crore has already returned to the system.

Remember that we are still some days away from the date set by government to deposit the SBN at banks. So its time for the RBI and the government to eat humble pie.

It is important to understand that the above cut-off date will not set free the RBI's responsibility to exchange the rest of the currency in circulation at their counters, it only limits the option of depositing/exchanging at banks.

To understand the currency printing schedule, one needs to see the letter of transmittal dated August 29, 2016 of the RBI Annual Report 2015-16 signed by former RBI governor Raghuram Rajan. Note the date, it is very important. We know that the present Governor Urjit R Patel assumed office on September 4.

If there was a plan in advance to demonetise these denominations, why then did the RBI print and disburse such large quantities of SBN into circulation?

This is nothing but sheer wastage of exchequer's money.

Moreover, if the RBI had such an advance plan to replace the above SBN, they should have devoted their time and energy to print lower denominations notes instead of SBN.

Hence, it is beyond doubt that the entire demonetisation plan came into the picture after Urjit Patel took charge.

The new denomination note of Rs 2,000 bears the signature of Governor Patel, not of Governor Rajan, which also another explicit evidence to prove that these notes were introduced after Governor Rajan left the RBI!

Part 2: 'RBI is letting the nation down with cheap tricks'