News
Business
Movies
Sports
Cricket
Get Ahead
Money Tips
Shopping
Sign in  |  Create a Rediffmail account
Rediff.com  » Business » What to make of this bull market?

It is impossible for anyone to explain how markets are hitting record highs during an economic recession.
It is both mysterious and surreal, notes Debashis Basu. 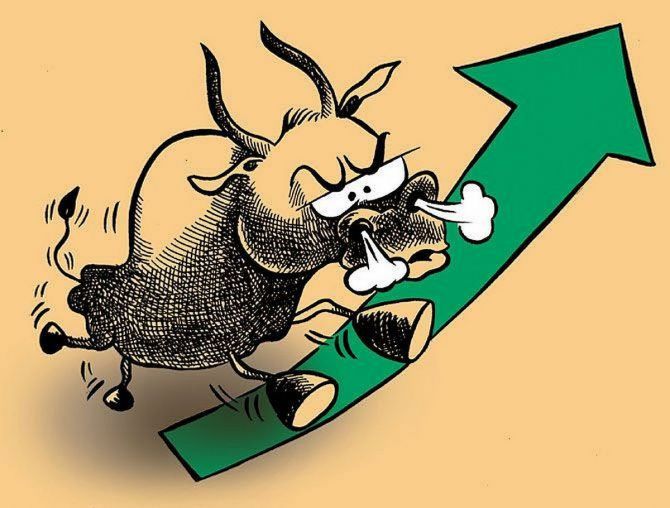 One of the biggest enigmas among the business and investing community now is, how can the stock market indices hit all-time highs against the backdrop of severe economic slowdown?

Nobody knew anything much about the virus. Life itself came to a halt.

Many small businesses were decimated. Large businesses said that they were flying blind. Growth collapsed all over the world.

After a crash in March, the market stabilised in April and May, but everyone said that would be a lull before the next storm. Everyone (including myself) feared that there was worse to come.

But miraculously, from extreme gloom and doom, the market rallied, and how! And now, we don't know what to make of this bull market.

Some still believe that this is all 'speculation' and economic reality will soon assert itself and stock prices will wilt.

But frankly, no one is sure of anything. Usually we manage to create post-facto explanations for any phenomenon. But the most interesting aspect of this rally is that even hindsight is not 2020, in this case.

What about the past patterns? George Santayana had said, 'Those who cannot remember the past are condemned to repeat it.' But this is true if the past repeats itself exactly.

In the market the past does not repeat itself exactly. How about Mark Twain's comment then? 'History never repeats itself, but it rhymes'? I used to be in this camp, but let's see what happened in 2020.

Within six months, after extreme despair, the market has become bullish and then in the next three months, super bullish.

Well, this was not only history not repeating itself, but it didn't even rhyme.

Each time, the market took years to go past previous highs. Not this time.

The same is the story of international markets: A crash and a rally. And this time, the external situation was much worse.

Even with the benefit of hindsight, it is impossible for anyone to explain how markets are hitting record highs during an economic recession. It is both mysterious and surreal.

And that's what is reflected in the net inflow from domestic and foreign institutional investors (DIIs and FIIs).

Even while the economy looked horrible, the month of May saw the start of investment inflows from FIIs.

Between June and December, FII investments in India have been net positive almost every month, amounting to a massive Rs 1.4 trillion.

Foreign investors pumped money not just in India, but also in Indonesia, the Philippines, South Korea, Taiwan, Thailand, and Vietnam.

During the highly eventful March-December period, the Indian capital market was buoyed by over Rs 5.9 trillion of net inflows from institutional investors.

Prices are determined by demand and supply. It is the same with stocks. If there are more buyers than sellers, prices will go up. This is exactly what happened in 2020.

It is unexpected, it is surprising but it's all there in black and white, as seen from the data.

Why did institutional investors pump in so much money?

We think we know what should determine stock prices -- the macroeconomic environment and factors that influence specific stocks.

But this time the macro environment was the worst in living memory and earnings too had collapsed -- at least they did in the first half -- for most companies.

So why did stock prices rally? Some will say the market discounts the future. This explains at a stroke, all that cannot be easily explained otherwise.

If the rally seems illogical we can always say that the market is discounting a better future.

If it's a bear market, we can always argue that the market is expecting worse to come. And hence, this logic can be tailored to explain away all that is inexplicable -- with the benefit of hindsight.

It is not an insight that can be used to predict anything -- only offer a post-facto explanation when we are flummoxed.

And what is that glorious future the market is discounting? After all, before COVID-19 struck, there was already deep despondency about anaemic economic growth.

What has happened in the last nine months for us to be so very hopeful? Well, companies have made sharp cost cuts, without affecting their businesses.

But will this be permanent? We don't know. Once the virus goes away, the force of earlier habit may take over. Costs will rise. But then, probably, so will revenues.

Freed from months of lockdown and restrictions, spending will boom. Maybe the anticipation of a coming consumption boom ('revenge buying') is driving the market. No one really knows.

Forecasting is a hit or miss business even in normal times. And at a time when even hindsight is not 2020, predict at your own peril what will happen in 2021.