The current economic situation of falling growth and inflation, might prompt RBI to continue easing rates. 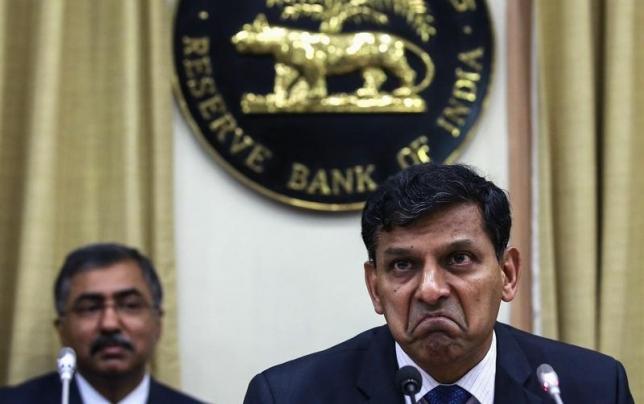 While the Reserve Bank of India (RBI) might remain silent on rate cuts in Tuesday's monetary policy, these will take place in the course of this financial year, say economists and strategists.

Morgan Stanley expects RBI to cut rates sharply rather than "dribble down".

The reason, say Chetan Ahya and Upasana Chachra, is that inflation will reach 4.75 per cent by the end of the year, compared to the consensus estimate of 5.8 per cent.

Retail prices have been on a downward trend through the past year, after staying elevated at 10 per cent levels annually in 2009-2014.

Even if growth momentum picks up, Morgan Stanley expects inflation to remain benign.

It says the situation is similar to 2003-04, when inflation remained stable at four per cent and growth averaged nine per cent a year.

Ridham Desai, managing director and head of research at Morgan Stanley, in an earlier interview to Business Standard said RBI had made it clear that it intended to keep real interest rates at 1.5-2 per cent; if inflation fell further, rate cuts would also be sharper.

While unseasonal rain and hangover of the deficient rainfall in the previous monsoon will impact farm output and, therefore, prices of select agri-commodities, the government is seen to be taking plenty of action to offset a sharp spiral in prices.

Expecting wheat output to be hurt by unseasonal rain in March, the government has already imported 80,000 tonnes.

On an average, India imported 20,000 tonnes of wheat annually during the crunch years.

This. combined with the current economic situation of falling growth and inflation, might prompt RBI to continue easing rates.

Gautam Chhaochharia, head of research at UBS, believes RBI will cut the repo rate by another 75 basis points by March 2016. Some say there could even be a 100-bps reduction.

Strategists believe the central bank's moves will support growth, as the government's fiscal consolidation programme looks far more credible than in the past.

Despite slow growth in revenue collection, the government is, by and large, expected to meet its fiscal deficit target of 4.1 per cent of gross domestic product in FY15.

Despite a deviation from the fiscal consolidation road map, economists and rating agencies seem convinced about the government's reform agenda.

DBS Group Research believes the fiscal deficit target of 4.1 per cent for the last year seems within reach.

Some economists also expect RBI to take measures for improving liquidity, so that transmission is faster.

In 2013, RBI had increased the daily cash reserve ratio (CRR) maintenance to 99 per cent from 70 per cent to defend the currency. In September 2013, this was reduced to 95 per cent.

With domestic macros in much better shape to support the rupee, Shubhada Rao, chief economist at YES Bank, says a case for reverting to the original daily CRR maintenance of 70 per cent can be made.

"This is likely to help the banking sector manage its daily liquidity requirement in a comfortable manner, thereby avoiding occasional spikes in short-term money market rates."

He believes a repo rate cut has a signalling effect, while a CRR cut would increase liquidity in the system and bring down the cost of funds.

Image: RBI governor Raghuram Rajan gestures while replying to a question in a press conference.