We are in this mess as the machinery of the government in a market economy is broken. We need technically sound banking regulation, so that capital is not misallocated, and the landscape does not get littered with zombie firms kept alive through evergreening, says Ajay Shah. 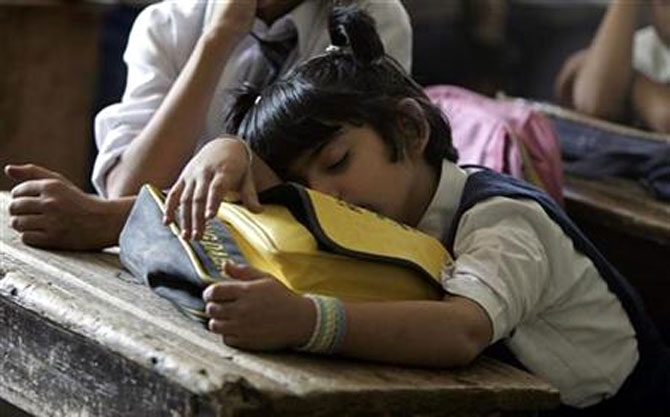 Thanks to a policy climate of emphasising short-term actions, and not disturbing incumbents, we are now stuck with a slow and painful recovery, says columnist Ajay Shah. A small girl sleeps in a classroom in Srinagar. Photograph: Danish Ismail/Reuters.

A business cycle downturn began in 2012, and conditions appear to be worsening. India's experience with the difficult times from 1997 to 2002 gives us some insights about how this might play out. The most important thing that should happen in the hard times is productivity enhancement by firms. This happens partly through exit of weak firms, but this is impeded by policies that encourage and subsidise "zombie firms".

How did we get into this mess? Important policy mistakes were made over the last decade. The Reserve Bank of India (RBI) tried to prevent rupee appreciation from 2004 to 2007. This gave low interest rates, and kicked off the biggest ever bank credit boom in India's history. In this credit boom, banks made a lot of dubious loans. The world got more difficult after the Lehman failure, and our policy machinery got worse. Private investment retreated from 2008 onwards. The currency defence of 2013 was the last straw.

Conditions in the economy are now quite daunting. Nominal revenue growth of non-financial firms has averaged five per cent over the last four years. Nominal net profit growth has averaged one per cent over the last eight years. Low profitability coupled with balance sheet constraints are hampering investment. The slump in projects announced or projects under implementation from 2009 onwards has not abated. We have gone back from a floating exchange rate to a managed exchange rate, through which the rupee is one of the strongest EM currencies. This has exacerbated the crisis in exports.

How will things unfold from here? It is useful to apply the intuition of 19th century capitalism, where macro policy for stabilisation was absent. In India, fiscal policy is not able to make a difference owing to the chronic fiscal crisis. Monetary policy is a bystander owing to low institutional capacity, and the lack of financial reforms required for an effective monetary policy transmission. Hence, the economy will fumble through the downturn on its own devices.

The experience of the downturn from 1997 to 2002 is instructive. At the time, conditions in the economy were very difficult, and many firms faced balance sheet difficulties. Some firms exited, albeit in a slow and painful way given the lack of a bankruptcy process. Some firms dug in and improved their productivity. Learning to export and learning to do outward FDI were important milestones in the journey towards high productivity. The better firms were able to overcome the home bias of foreign investors, and create assured access to low cost debt and equity capital without depending on the Indian financial system.

Conditions remained difficult for years, but under the surface a great churning was taking place. The better firms were obtaining productivity growth. The firms which failed to increase productivity were trapped in a downward spiral. They freed up labour and capital which got used by the better firms. Labour market conditions were tough, where firms could be choosy in recruiting for competence, and wage growth was low.

This microeconomic transformation of the landscape of firms laid the foundations for the great expansion from 2002 to 2008. Supported by buoyant conditions in the world economy, India got the highest ever GDP growth over these six years. History does not repeat itself, but it does rhyme. While our experience of 1997-2002 will, of course, not precisely play out in coming years, some elements would recur.

The previous experience suggests that we should focus on creative destruction and the exit of some firms, and the quiet wars that are waged by the leadership of some firms in favour of superior productivity.

In the internal politics of firms, most of the time, protection of internal power structures takes primacy over serving customers or shareholders. In tough times, the leadership of better firms is able to pursue the interests of customers and shareholders, and tear down inefficient internal structures.

The first ingredient for this is sustained failure of the status quo. Low profit growth and balance sheet difficulties are visible in thousands of companies. Incumbents within firms are weak, which creates conditions for change.

In the international discourse, the phrase "zombie firms" is used for firms which ought to have been liquidated through a bankruptcy process, but are kept alive artificially by banks and/or taxpayers. Zombie firms hamper productivity, as they use labour and capital that could be better utilised by other management teams. Zombie firms also adversely influence the recovery by hurting the profit rate of healthy firms. As an example, the presence of a large zombie airline in India is harming the profitability of all efficient airlines. Policy makers will speed up the great churning by blocking the extend-and-pretend game of banks, which has created numerous zombie firms.

Some management teams will be able to overcome their internal politics and create conditions for firm transformation. For these firms, access to capital will be a bottleneck. Given the lack of reforms in banking, bank credit growth will be sluggish for a while. The firms who are able to obtain strong capital access through the private and public equity market, through bond issuance, and by growing trust on the part of foreign investors, will fare better.

We are in this mess as the machinery of the government in a market economy is broken. We need a bankruptcy code, so that low productivity firms swiftly exit, ceding business units or labour and capital to more productive firms. We need technically sound banking regulation, so that capital is not misallocated, and the landscape does not get littered with zombie firms kept alive through evergreening. We need to setup the institutional infrastructure of fiscal policy and monetary policy which can help stabilise the economy. We need financial sector reforms so as to improve access to capital for firms, and achieve a monetary policy transmission.

Many things would have been better today, if these actions had been taken ahead of time. In a policy climate of emphasising short-term actions, and not disturbing incumbents, those actions were not taken. Now we are stuck with a slow and painful recovery.