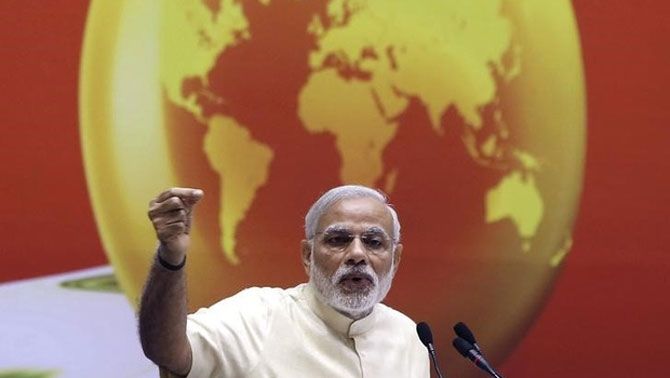 There’s a “List of 10 Things” for realising India’s potential that Prime Minister Narendra Modi received as the chief minister of Gujarat from Jim O’Neill, the originator of the “BRIC” concept.

While there’s agreement on ICT’s importance for India, there’s difficulty getting it in place to best effect. This is because policy changes are needed to make Digital India a reality. These are the kinds of decisions that will turn the rhetoric about connectivity into reality.

Some changes are relatively easy, such as enabling 60 GHz Wi-Fi, while others require more effort, as explained below. These include better terms for satellite communications, enabling broadband on the 500-600 MHz bands, and spectrum and network sharing.

In our land of such range and contradictions, so much needs improvement that everything clamours for immediate attention. Attempts to address them all together are misplaced, however, because achieving results requires goal orientation, prioritisation and systematic action, to direct a convergent investment of time, effort and capital.

Also, projects must be done with the realisation that the acid test is end-to-end delivery, even if it is initially to a small segment of the market. Only then can the rest of the iceberg be addressed: Consistent ongoing operation and maintenance, and scaling up.

Think of the years of effort, capital and human resources invested without that first delivery in the National Optic Fibre Network. While defining objectives appropriately and setting priorities are difficult, both are imperative.

A recent report on The Networked Society City Index for 2016 by Ericsson reaffirms ICT’s critical role in productivity and living standards.1 The report also shows that better-developed cities are on more sustainable paths to the goal of the desirable triple bottom line (TBL) of social, economic and environmental betterment.

ICT facilitates not only sustainable development of cities and often their surroundings, but extends through the networked society far beyond their geographical environs. Even our metros need attention, with Mumbai and Delhi ranking at 36 and 38 out of 41.

Efforts at setting up Digital India have to contend with the reality that most non-urban communications have to be wireless, as does a significant proportion of urban access.

This is because the cost and practical difficulties in laying and maintaining fibre everywhere is far greater than building wireless networks. The accompanying chart, showing the spread of broadband in India at the end of March 2016, illustrates this point.

The clusters are around major cities, with broadband penetration in Delhi/NCR highest at 58.2 per cent. Except along their major connecting links, the spaces between clusters are more difficult to connect and aggregate, as habitations are not densely clustered. Also, potential revenues are lower. Such areas urgently need lower-cost wireless coverage.

Of the many constraints to building more accessible ICT in India, a major set lies within the control of government and stakeholders, provided they act together and are not adversarial about policies governing access technologies.

There are unused frequencies in the 60 GHz band for which inexpensive equipment is available abroad with a capacity of several gigabits.  Press reports years ago mentioned the de-licensing of this band in India.

Last November, the Telecom Regulatory Authority of India (Trai) recommended de-licensing Wi-Fi use, and light licensing backhaul with minimal charges. Yet, this asset is wasted because there’s no policy permitting its use.

It costs nothing to de-license in line with global norms. Apart from additional Wi-Fi capacity, service providers could use it for backhaul from small cells.  Revenues are likely to rise, and the government would collect increased taxes.   Domestic manufacturers could possibly develop products for what should be a huge market.

Another proven technology is satellite communications. This is priced too high in India.

Satcom tariffs are apparently nearly 300 times higher than in the US, while private sector applications for manufacturing satellites are languishing.  Also, there is considerable potential for manufacturing associated equipment, such as VSATs, end-user terminals, and so on.

A third area is unused or underutilised government spectrum. The most-useful and least-controversial, except for turf considerations, is unused broadcast spectrum in the sub-700 MHz bands.

Government departments, namely, the department of telecommunications (DoT), information and broadcasting (I&B), the Ministry of Electronics and Information Technology, and the Trai, could coordinate their approach, so that I&B and Doordarshan retain the spectrum, while allowing common access to shared spectrum and infrastructure for paid use by service providers.

Doordarshan could increase its reach by providing programming and content over these links.

These frequencies would be most effective in extending rural broadband, because of the distances that could be covered inexpensively. There is an issue with equipment, as there are no large, established markets anywhere yet for TV White Space devices, and there is insufficient support for local manufacturing even with Indian intellectual property rights.

In fact, we have a Catch-22 situation here: Such devices are likely to have massive deployment in India, but we don’t have policies that allow these frequencies for broadband.

The irony is that developers who manufacture prototypes in India have no access to spectrum even for testing their products, and will have to rely on markets abroad for testing as well as sales.

Rules restricting usage of other frequencies could also be amended through a coordinated process. The result could be policies that treat spectrum usage as part of a shared infrastructure solution for Digital India.