News
Business
Movies
Sports
Cricket
Get Ahead
Money Tips
Shopping
Sign in  |  Create a Rediffmail account
Rediff.com  » Business » If the Budget disappoints, Nifty could fall below 8,000

If the Budget disappoints, Nifty could fall below 8,000

The market is moving up because there is a high degree of speculative retail and operator action. This is rarely a situation sustainable for any lengthy period, says Devangshu Datta. 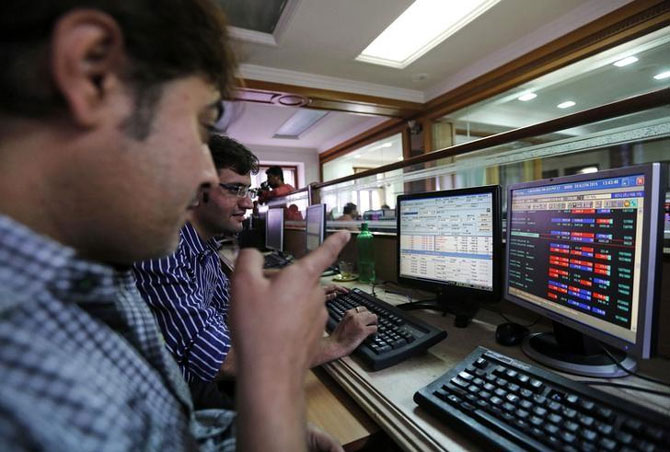 The stock market continues to log gains although there are signals that a correction could be imminent.

Earnings so far have not been great but poor numbers were already discounted due to demonetisation. Hopes of Budget sops are keeping bulls in business.

The Nifty has moved steadily up since it broke out past the 200-Day Moving Average (now at just above 8,300). If we go by history, the market could trend up until the Budget at least. That policy document might be a watershed, either causing a steeper uptrend or leading to a sharp correction.

Support would be ranged at around the 200-DMA and the current pattern is bullish, with the index hitting higher highs.

The closing above 8,450 could set up targets in the range of 8,600-8,650 and if the Budget does deliver, much higher moves are possible. On the other hand, if the Budget disappoints, a crash to below 8,000, is equally likely.

Most signals suggest the trend will continue up. However, there are a couple of mildly disquieting signals.

The market is moving up because there is a high degree of speculative retail and operator action. This is rarely a situation sustainable for any lengthy period.

On the global front, the dollar continues to muscle its way up. If FPI selling continues, the rupee could collapse to historic lows.

Despite this, there has been no rally in export-oriented stocks, with information technology (IT) and pharmaceuticals sectors both hit by fears of protectionism from the new American President.

This is almost zero-delta with the index at 19,026. The break-evens are roughly at 17,800, 20,200. Either end of this long strangle could be hit, given three big trending sessions in February.  That is almost guaranteed.

This cuts the cost and if a short option is struck, the corresponding long options will rise in value. However, traders should note that there are high chances of volatility by February 2, given the Budget session.

The VIX has fallen steeply in the past couple of sessions. The put-call ratio is not so useful, so close to settlement but it is in very bullish territory.  In fact, the PCR is in a danger zone since the market often turns down from PCRs in this range of 1.5-plus.

The unusual Budget schedule and the running series of assembly elections through February will guarantee high volatility. Selling options will be more risky than normal.

The current optimism can be gauged from the asymmetric payoffs. A combination of those spreads costs 64, and pays a maximum 36. This is not zero-delta.

The break-evens are at 8,336, 8,664. Given the Budget, there are good chances that one side of this position will pay full value, however.