… Are far-reaching social changes coming with it, asks Ajit Balakrishnan. "Sir, when will you open the office for all of us to come every day?"

The voice on my mobile phone had an edge of pleading that I have never heard from that person -- she was one of the most super-high-performing persons in our company and known for her maturity and balance in dealing with her internal colleagues as well as external parties.

I was thrown. I had assumed that somebody like her would have welcomed the relief of having not to commute to work two hours each way, jostling with other passengers in Mumbai's overcrowded trains.

In other words, she was someone who I had expected would be enjoying the work from home regime that we, all over the world, have been commandeered into.

I, personally, had started enjoying the video-conference reviews and brain-storming meetings that I do nowadays, on most days, as many of five-half-hour-long meetings with 15-20 different colleagues in each. And not having to do the exhausting one-hour drive to office and back was a welcome relief for me.

But obviously, work from home was not being viewed the same way by everyone. That train of thought made me reflect about the societal implications of work from home.

A short year ago, if someone had said that he was going to work from home for a few days, we assumed that he was wanting time to slack off, watch TV at home, cursorily watching his e-mail inbox, and perhaps taking a post-lunch nap. People who did that for more than a day or so in a month would be tagged as slackers qualifying for a forced early retirement.

I guess even our perception of who we are had been determined by the poshness of the office we were part of, the dress code that our offices/companies subtly enforced, and the recency of the model of the car we drove to work.

A big part of the wealth that people accumulated was driven by the astronomical price increases in real estate, caused largely by the expansion of demand for office space. If that demand collapses by, say, 50 per cent or more because of work from home, will a major source of accumulating personal wealth be eroded?

Before we further depress ourselves, it is important to note that there seem to be signals emanating, as I write, from American and European cities, that policy-driven and State-enforced work from home may be gradually done away with.

On the other hand, leading companies in the world have started making announcements that getting a third or half of their employees to work from home may be a permanent feature even after all signs of coronavirus have been eradicated.

Historically, mankind, when faced earlier with epidemics like plague and cholera, natural calamities, and even world wars, had progressed in new directions after that or, should I say because of that?

What are some of the good things that may come about in society because of this long period of work from home?

For one, the social isolation that coronavirus has enforced on us as society and which has driven the work from home movement has also, in parallel, driven an insanely faster adoption of Internet-based technologies. For now, the earliest waves have spread communication technologies that make it infinitely easier to have social and official and entertainment gatherings online.

Coming close on the heels of this is the equally insanely faster adoption of online financial services, be it payment systems or stock trading systems, and increasing evidence of spreading to small business lending.

While this again means that bank branches may start disappearing, it also seems to indicate that more people are likely to be using these lower-cost and more efficient services because of technologies like deep learning/artificial intelligence.

When this combination of work at home and deep learning/artificial intelligence technologies more rapidly work their ways through the medical care industry and judicial system, we are likely to have more affordable health care and as well as a more affordable and speedier justice system.

Businesses will be able to use talent not just from your own city or even country but from anywhere in the world. The world will not just be your supply source of talent but also your market.

Of course, I struggle to imagine what is going to happen to the current system of visas and passports, which many countries use to protect the jobs of their own people from the services offered by people from other countries.

In thinking of all this I cannot but think of an example from my own family, which may signal the true and gigantic positive impact of work from home. I have an aunt (my mother's younger sister) who graduated with a BA in mathematics from Madras University, winning the gold medal for topping her batch. She was soon married off and spent her life bringing up her children -- the question of her seeking a job did not apparently arise because both she and the 1950s society of small-town India couldn't imagine any other alternative.

I cannot but imagine that if my aunt was in a similar situation today, being a topper in mathematics from a top university, she could have safely embraced a life in which she could both have her children and bring them up with her loving care and also work from home in a high-quality professional job that made full use of her intellectual power.

Thus, maybe the work from home era will bring truly fulfilled lives to many millions of talented Indian women who, even today, are forced to choose between being a mother and having a profession.

And a new era may dawn in Indian society, with a new and enhanced role for women. 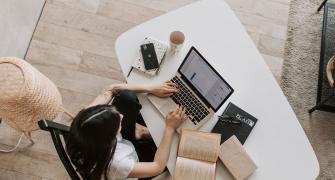 How to WFH Productively: Smart Tips