Reuters photographers describe their favourite images from the tournament.

Speed, skill and control were the hallmarks of the greatest footballers at the World Cup in Russia, but the same could be said of those covering them for the world's media.

Here, Reuters photographers describe their favourite images from the tournament: 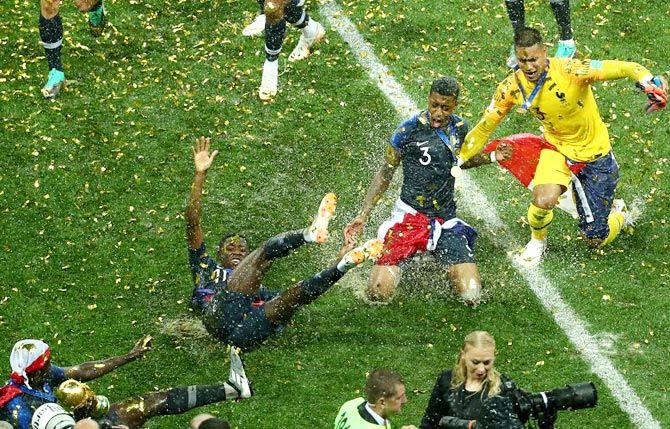 Michael Dalder: "Soccer has two major things we have to illustrate: Goals and emotions. I think this image is pure emotion." Damir Sagolj: "Both teams lost their first two matches in the group stage and were already out of the tournament, so not many expected the match between Egypt and Saudi Arabia to really be a cracker."

"However, soon after kick off it became obvious that players were actually not demoralised at all, and chances started happening at both ends at the Volgograd Arena."

"I had my usual corner position that, against all logic and my wishes, didn't produce any excitement nor any serious goal celebrations in any of the matches I covered."

"That was until that June 25 when Saudi Arabia scored their injury time winning goal -- the ball ended in the right corner and goalscorer Salem Al-Dawsari started running towards me."

"Luckily, I had the right camera with the right lens in my hands as a young player did what is every photographer's dream -- a flip in front of him after the winning goal."

"It may not be the finals, nor was it any of the big teams or world famous players, but a flip is a flip. And it was a really nice one, and the only one during the World Cup -- enough for me to be the highlight of the whole tournament."

Darren Staples: "My favourite shot of the World Cup was of Egypt's Amr Warda during their match against Uruguay in Ekaterinburg."

"I was shooting from the tribune, a rare experience for myself. It's a position photographers are not permitted to shoot from during English Premier League games -- the nice dry bit where the writers sit."

"I find it interesting because not only does it only give you more scope to play with the shadows from the stadium, but it also gives you a better understanding of the team's formations and tactics when looking from above."

"I was always told you shouldn't laugh at others' misfortunes, but on this occasion I couldn't stop myself."

"Warda attempted an overhead kick, a photographer's dream shot when the ball nestles in the back of the net."

"This time though, the player completely missed the ball and landed flat on his back in front of 35,000 people. I felt his embarrassment." 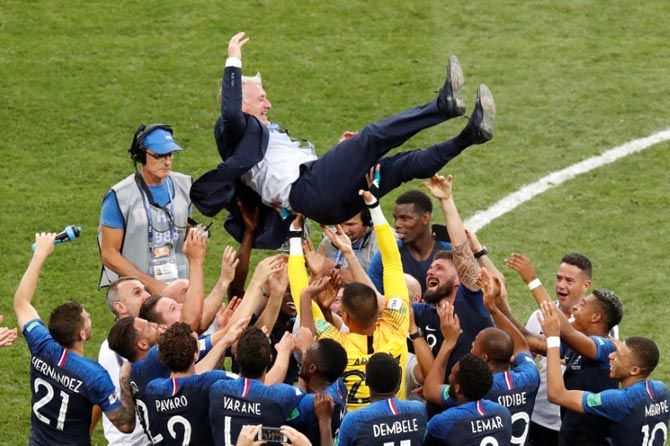 Christian Hartmann: "Sometimes well-known sayings have to be re-written, so to paraphrase Gary Lineker: 'Football is a simple game. Twenty-two men chase a ball for 90 minutes and at the end, the Germans don't always win'."

"This time it was France's turn. An emotional moment for the country, for a French photographer covering his first World Cup, but first of all for the team and its head coach."

"As a member of our Moscow-based Reuters crew, I was assigned to cover our elevated 'tribune' position from the round of 16."

"This position offers an excellent overview of the full scene and is quite good to shoot goal scenes, action and reaction with the green pitch as background."

"This position is never open for Ligue Un matches in France, and I was excited to be there for the most important matches staged in both Moscow stadiums."

"But what a finish for me! Just after the final whistle, the whole team began to celebrate on each corner of the pitch."

"As a photographer, these first moments are the ones you want to capture, looking for the more intense reaction of the key players and, of course, their coach."

"After a few minutes, Didier Deschamps went to the group waiting for the trophy ceremony, and I had a feeling I had to focus and stick with the 600mm telephoto lens as something could happen."

"Seconds later, Deschamps was lifted by the team and thrown into the air."

"This was one of the strongest images for me, a French photographer covering a World Cup final and witnessing his team bringing the trophy home." 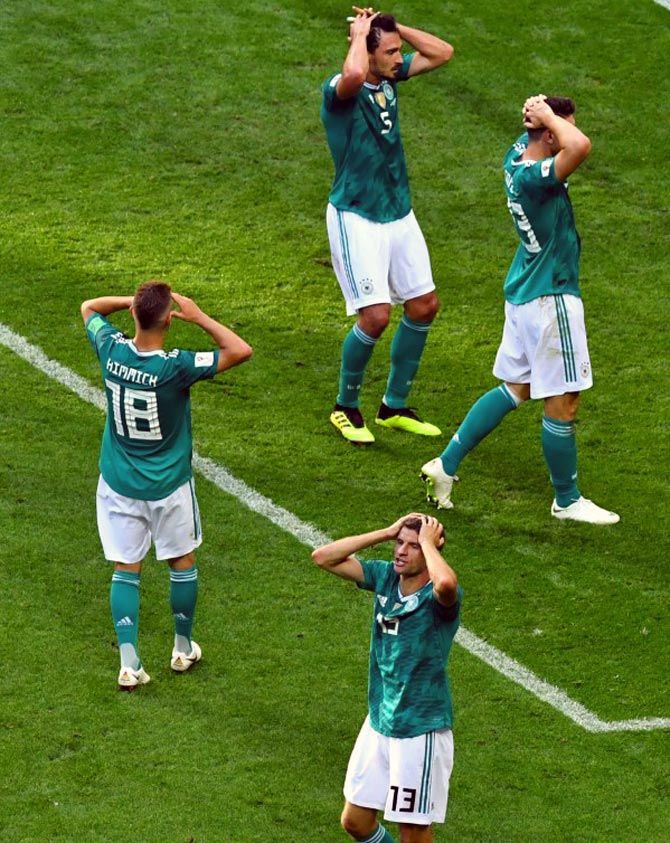 Dylan Martinez: "What can I say about this picture? It's not quite perfect, as it works best as a vertical, and since when was the world vertical?"

"Still, I do like the geometry of it and I rarely get to photograph from the tribune, so when I got the chance I jumped."

"And seriously, how much fun? It's like watching it on TV. And then, of course, I got to see one of my favourite players, Son Heung-min of Spurs, score the winning goal for South Korea and send Germany home."

"It was a big story, a big moment, and although I'm not usually one for schadenfruede, as any genuine sports fan will tell you, that's pretty much the whole point of the World Cup." Kai Pfaffenbach: "Usually a football World Cup is all about the action, goals and emotions on the pitch. This World Cup's final had a lot of that too, but despite the 4-2 result my favourite picture is this."

"As soon as the victory ceremony started, a heavy downpour began."

"A helper had an umbrella for Russia President Vladimir Putin quickly on hand, while his counterparts from France and Croatia enjoyed a little shower along with FIFA President Gianni Infantino." "It's probably the best celebration picture I'll get from a World Cup, but as the goal knocked England out if the competition I'll always look at this images with a hint of sadness."

"It was taken on a 16mm lens, the sequence of celebration pictures started on a 70-200mm but as he and the rest of the team got closer and closer, I realised pretty quickly that something a little bit wider would be necessary."

"As the players fell into us, the ensuing carnage saw AFP photographer Yuri Cortez get hugs and kisses from the Croat players after he was knocked to the ground, which also made for a lovely set of pictures." 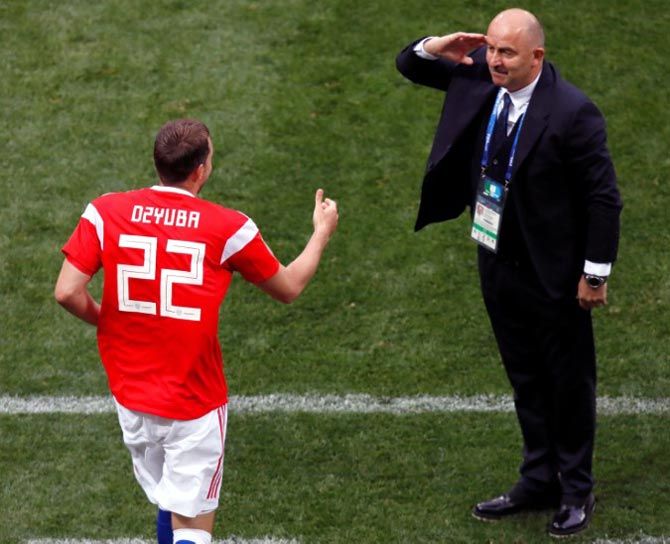 "What is great about this moment is that before the start of the World Cup, Russia's national team had not won a match for several months, and the whole country didn't believe they could get very far."

"Against Saudi Arabia, Dzyuba scored immediately after coming off the bench in the second half."

© Copyright 2021 Reuters Limited. All rights reserved. Republication or redistribution of Reuters content, including by framing or similar means, is expressly prohibited without the prior written consent of Reuters. Reuters shall not be liable for any errors or delays in the content, or for any actions taken in reliance thereon.
Related News: FIFA, Saudi Arabia, Reuters, Didier Deschamps, Artyom Dzyuba
SHARE THIS STORYCOMMENT
Print this article 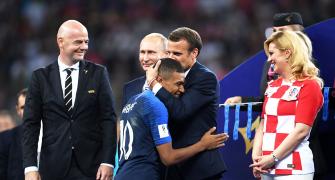 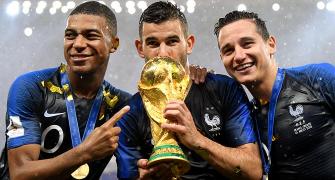 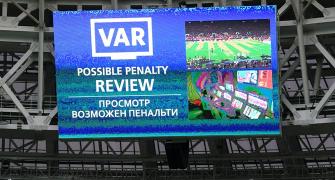 Was the controversial VAR penalty the turning point in World Cup final? 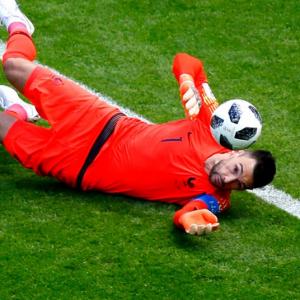 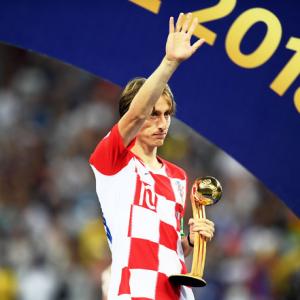