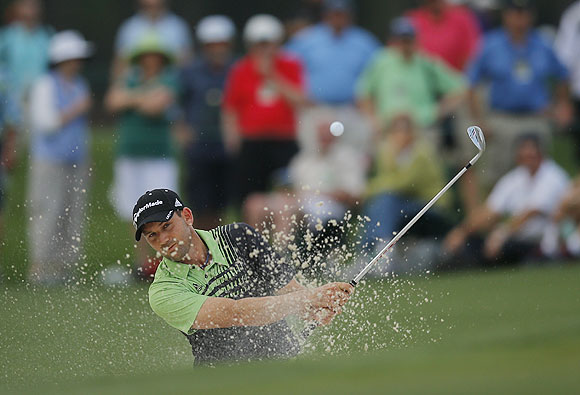 Image: Sergio Garcia of Spain hits from a sand trap on the 17th green during first round play in the 2013 Masters golf tournament at the Augusta National Golf Club in Augusta, Georgia, on Thursday
Photographs: Brian Snyder/Reuters

Sergio Garcia and surprise package Marc Leishman seized joint control in Thursday's opening round at the Masters, though tournament favourite Tiger Woods was lurking just four shots off the pace.

On a mainly overcast day at Augusta National where there was very little wind, Spaniard Garcia and Australian Leishman fired six-under-par 66s to surge one stroke clear of the field in the year's opening major.

Long-hitting American Dustin Johnson, who missed last year's Masters due to a back injury, also got to six under but bogeyed the tricky par-four 17th to end the day alone in third after shooting a 67.

However, no one in the upper reaches of the leaderboard will be able to ignore the ominous presence of four-times champion Woods who, watched by girlfriend Lindsey Vonn and five-deep galleries when he started his round, finished with a 70.
Tags: Tiger Woods , Marc Leishman , Sergio Garcia , Spaniard Garcia , Rickie Fowler 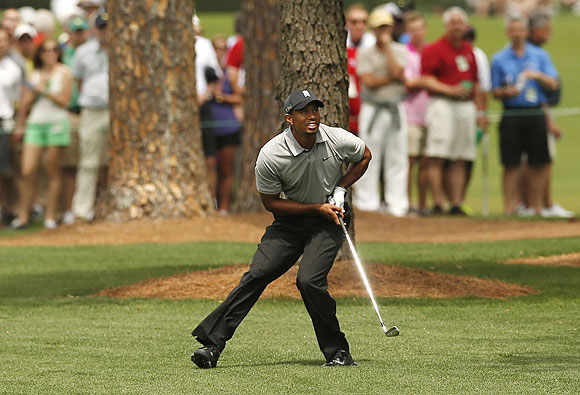 Image: Tiger Woods of the U.S. watches his approach shot to the seventh green during first round play in the 2013 Masters golf tournament at the Augusta National Golf Club in Augusta, Georgia on Thursday
Photographs: Mark Blinch/Reuters

The World No 1 opened with a 70 on the way to his first three victories at Augusta National and is perfectly placed as he bids to win his first major title since the 2008 U.S. Open.

"It was a good day, a solid day," the 37-year-old Woods said after mixing three birdies with a sole bogey on greens which ran a little slower than he expected.

Woods, who has been installed as a hot favourite this week after winning three times in his first five starts on the 2013 PGA Tour, made a solid start with a two-putt par at the first, where he has often struggled in the past.

The 14-times major champion picked up his first shot of the day at the par-three sixth, then birdied the par-five eighth to reach the turn in two-under 34. 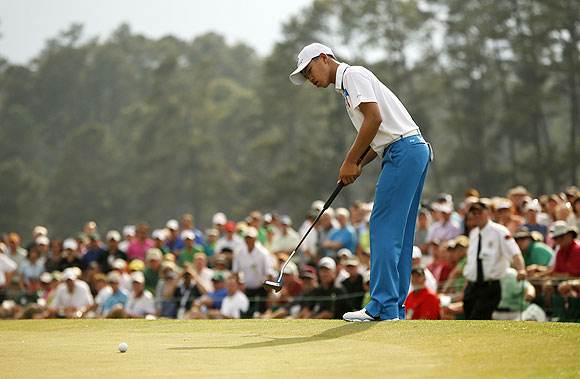 Image: Fourteen-year-old amateur Guan Tianlang of China sinks a birdie putt on the 18th green during first round play in the 2013 Masters golf tournament at the Augusta National Golf Club in Augusta, Georgia, on Thursday
Photographs: Mark Blinch/Reuters

Though Woods failed to cash in on the back nine, offsetting a birdie at the par-five 13th with a bogey at 14 before failing to birdie the par-five 15th, he was overall happy with his round.

"It's a good start. I hit the ball very solid today and lag-putted pretty good today and I made a few here and there. Right now I'm only four back and I'm right there."

One of the most impressive performances of the day came from 14-year-old Chinese Guan Tianlang who rolled in a 14-foot birdie putt from just off the green at the last for a 73, the best score among the six amateurs competing this week.

Three-times champion Phil Mickelson opened with a 71 while Northern Irish world number two Rory McIlroy, who squandered a four-shot overnight lead with a final-round 80 at the 2011 Masters, carded a 72.

Thirty-three players in the field of 93 ended the day under par after taking advantage of relatively calm conditions at the spiritual home of American golf known by many as the 'Cathedral of Pines,' but defending champion Bubba Watson battled to a 75. 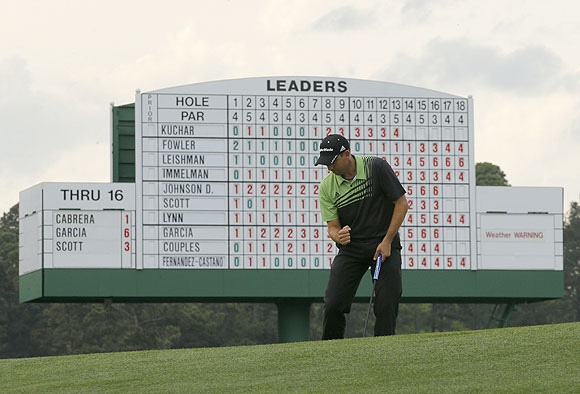 Image: Sergio Garcia of Spain reacts after sinking a par putt on the 17th green during first round play in the 2013 Masters golf tournament at the Augusta National Golf Club in Augusta, Georgia, on Thursday
Photographs: Brian Snyder/Reuters

Garcia, at the age of 33 still hunting his first major title, was delighted to complete a bogey-free round at a venue where he has never been entirely happy.

"Today was a nice day," said the Spaniard, who has recorded just two top-10s while missing four cuts in his previous 14 appearances. "It's obviously not my most favourite place, but we try to enjoy it as much as we can each time we come here.

"I played extremely well the first 10 holes and then I struggled with a couple of tee shots here and there over the last six or seven holes.

"What I'm going to try to take into my pillow tonight, it's the first 10 holes. Without a doubt, I feel like it's the best ten holes I've played at the Masters."

Leishman, making only his second appearance at the Masters, rebounded from a bogey at the par-four first with seven birdies to set the early pace, making mockery of the belief that local knowledge is a prime factor here.
Tags: Leishman , Garcia

'I hit some good shots, made some reasonably easy pars' 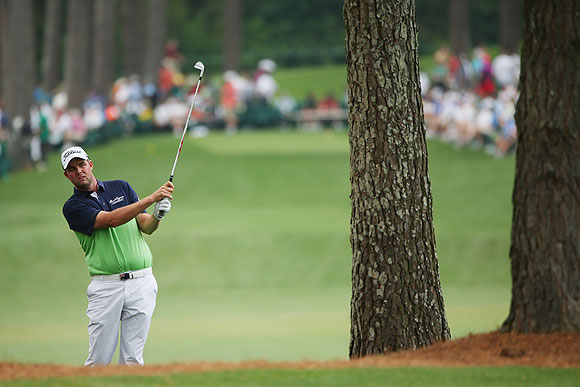 Image: Marc Leishman of Australia hits the ball from the 17th hole during the first round of the 2013 Masters Tournament at Augusta National Golf Club on April 11, 2013 in Augusta, Georgia on Thursday
Photographs: Mike Ehrmann/Getty Images

The 29-year-old Australian played flawless golf on the hilly layout after making his only mistake of the round at the tricky opening hole.

"It was a good day obviously," said Leishman, who booked his place at the Masters by winning his maiden PGA Tour title at last year's Travelers Championship.

"I got off to a bit of a shaky start, a few nerves early. But I got those out of the way with a birdie at three and then we're away.

"I hit some good shots, made some reasonably easy pars, and I think that's what gave me the confidence to go on from there."

Welshman Jamie Donaldson produced the shot of the day with a hole-in-one at the 180-yard par-three sixth, recording the 24th ace at the Masters on the way to an opening 74.