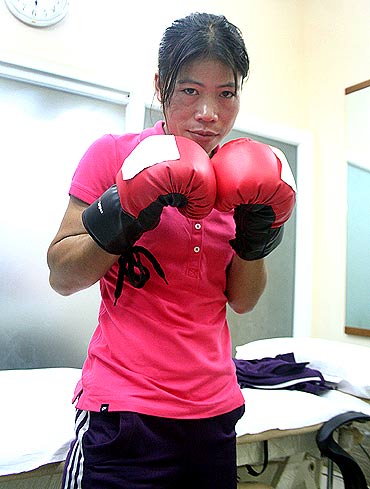 In our year-end special, Rediff.com looks at the men and women who wrote the India story this year.

M C Mary Kom, the Manipuri Wonder Woman, has won the World Boxing Championship five times. With her eyes set on the London Olympics, she is hoping for a grand finale.

Manu Shankar salutes the one and only Mary Kom, in our book the Indian Athlete of the Year.

Mangte Chungneijang Mary Kom stands in her own league.

The story of the five-time winner of the World Boxing Championship is nothing short of a fairy tale. While the world knows her as one of the fiercest boxers, her journey has been full of twists and turns.

Dubbed 'Magnificent Mary' by the International Boxing Association, not many know that she actually started off as an athlete. "I was into sports in school, and often won prizes, especially in athletics. I was 13 when I confided my dream to my mother," recalls the 27-year-old boxer from Manipur.

For that she had to move from her home in Kangathei Kom village in Churachandpur district to the state capital Imphal, where coaching facilities were located.

Her parents were initially reluctant to allow this move. "But I persisted and persuaded them that sports is a field where I can do well," says the 2010 Asian Games bronze medalist.

Even though the 400 metres was her forte, she tried her hand at the pole vault and javelin. Manipuri boxer Dingko Singh's gold medal at the 1998 Asian Games in Bangkok was the inspirational turning point in her career.

Rousing start to a career 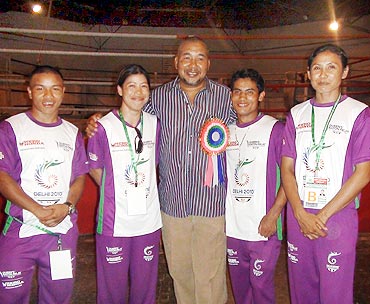 Image: Mary Kom, second from left, with her coach Leishangthem Ibomcha Singh and other boxers

"I used to watch Muhammad Ali on television and in 1998 when Dingko Singh won gold at the Asian Games, I decided to take boxing more seriously. That's how everything began," she recalls.

She had a rousing start to her career. In the first year itself, in 2000, she became the state and national champion, which was followed by a historic silver medal at the World Championships.

Leishangthem Ibomcha Singh still remembers the day when 17-year-old Mary convinced him to take her under his wing. "The athletics coach had recommended her name. The first thing I noticed was that she was tiny and skinny," remembers the coach.

"'Boxing is for strong people,' I told her. 'How can you box?' But she convinced me to take her in the camp. I have to admit I am glad to have her as my student," the coach -- like coaches the world over -- adds with the right measure of understatement. :=)

'It's been a difficult road for me' 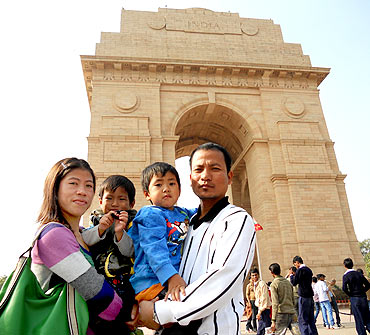 Growing up in a state, which was hit by violent insurgency, Mary didn't tell her parents when she took to boxing.

"I never told my family when I started boxing. They thought I had joined some extra-curricular programme. It was only after I became a state champion that they got the news from the radio and newspaper."

"My father was furious and said no to boxing. He was okay with athletics, but not boxing. His family was sceptical and the neighbours too were critical," she says.

"My dad would often say, 'As a girl you cannot win the world.' I took it up as a challenge and told myself, 'I will prove to the world that everything will be ok'."

She not only proved her father wrong, but also found a perfect partner who encourages and supports her.

"It's been a difficult road for me, but I have done it for my country. And all this is possible because of my husband (Onler Kom), who has been my pillar of strength all these years," says the mother of two.

"My father still doesn't know the rules of the sport and whenever I discuss boxing he says, 'Boxers get hurt.' But he is proud of me today," she adds.

The Arjuna Award and Padma Shri 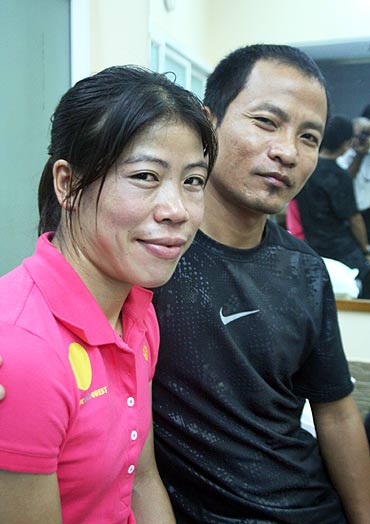 With Mary away for most part of the year, Onler, who keeps a low profile, takes care of the children.

"Soon after our marriage in 2005, she left for training. She is very focused and I'm happy to help her in my own way," says Onler.

"She is barely able to spend 10, 15 days at home which speaks volumes about her commitment to the sport," adds the proud husband.

"No Indian boxer is a winner at the World Championships," adds Onler, who plays football for a club in Manipur.

Does Mary think she is getting enough recognition for her achievements?

"The government has definitely given enough recognition. I won the Arjuna Award in 2004 and then Padma Shri in 2006," she says.

"Earlier, whenever I used to go shopping, people didn't recognise me. But after the World Championship, people do recognise me," adds the champion. 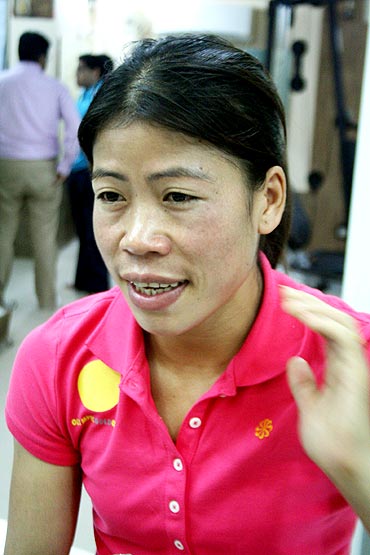 One of the problems a sport like boxing confronts is the lack of sponsors, says Mary.

"It's difficult to get sponsors for athletes, especially for boxing. Glamorous sports like cricket, tennis find it easy to get sponsors, but not us. Thankfully, Herbalife and Olympic Gold Quest have come to help me out."

The five-time world champion doesn't want to see her twins in the boxing ring. "It would hurt me immensely if they get punched in their faces by opponents."

"I would prefer seeing them on a tennis court. But if they want to get into it (boxing), I will definitely support and guide them," she adds.

The Manipuri Wonder Woman has set her sights on the 2012 Olympics in London and wants to win a medal on the grandest stage of them all.

"After the Asian Games disappointment (where strange umpiring thwarted a gold medal), I have now turned my attention to the Olympics," she says.

"I will definitely go for gold, but representing the country on the grandest stage of them all is a reward in itself," she says.

"After that, maybe, I will retire and coach young boxers."