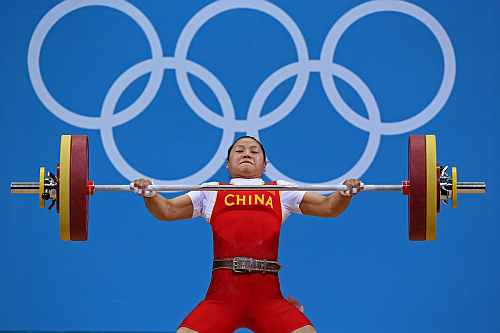 Li set Olympic records in the snatch and total weight but missed a world record attempt in her final clean and jerk. 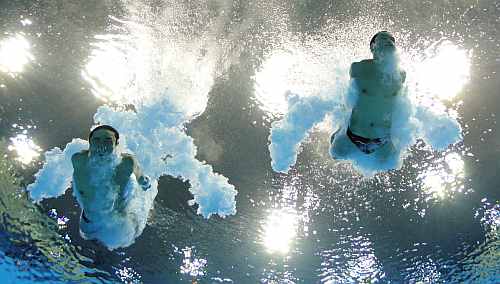 Cao Yuan and Zhang Yanquan extended the country's diving dominance with a victory in the men's 10-meter synchronized platform Monday, giving China its second gold medal on the boards at the London Olympics.

Cao and Zhang totaled 486.78 points in the six-dive final, spoiling the gold-medal hopes of Brits Tom Daley and Peter Waterfield, who were shut out after a major mistake.

"If you miss a dive in this kind of field then you're out," Daley said.

Cao, who is 17, and 18-year-old Zhang are Olympic rookies. But they were unflappable while launching themselves off the 10-meter tower in front of the partisan crowd that shouted "GB! GB!" 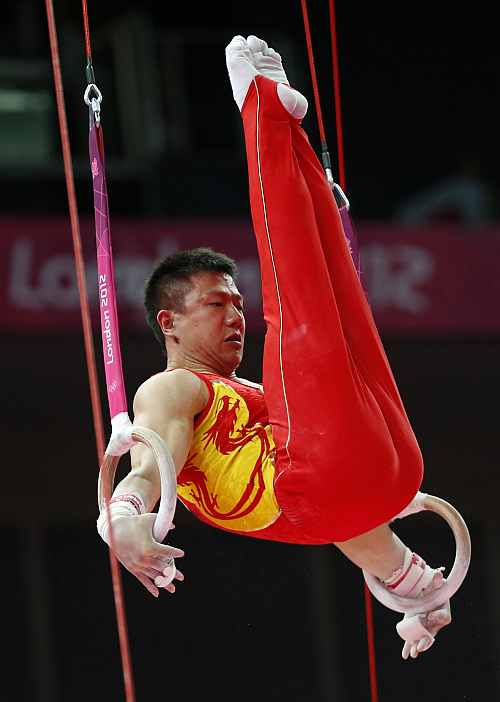 When there's gold to be had, don't ever doubt the Chinese.

When it comes to silver and bronze, it can get tricky. It did at men's gymnastics on Monday.

The Chinese won their second straight Olympic title and third in four games, making anyone who wrote them off after a dismal performance in qualifying look silly.

Their score of 275.997 points was more than four points better than Japan, which needed help from a DVR to finish second.

Britain was initially announced as the silver medalist, setting off raucous celebrations at the O2 Arena. The British don't have a proud history in gymnastics — they barely have any history — and this was their first men's team medal in a century. But Japan questioned the score of three-time world champion Kohei Uchimura on pommel horse, the team's very last routine.

While judges huddled around a video screen, Uchimura and his teammates sat stone-faced while the British partied. About five minutes later, Uchimura's score was revised and Japan was awarded the silver while Britain was bumped down to bronze.

It was of little consolation to the Japanese, who were bested by the Chinese yet again.

Isaev wins it for Russia Isaev defeated the current world champion, Riki Nakaya of Japan, in a close-fought final that saw both competitors struggling to pin each other to the ground.

The 25-year-old Isaev was seventh at the world championships last year.

The bronze medals were won by Nyam-Ochir Sainjargal of Mongolia and Ugo Legrand of France. Kaori Matsumoto has won the women's 57-kilogram division to give Japan its first gold medal of the London Olympics.

It is Japan's first gold medal at the London Games in the martial art it invented.

Matsumoto defeated Corina Caprioriu in the final, using footwork to gain an advantage and eventually throw the Romanian for the win.

The Japanese men have so far won two judo medals: one silver and one bronze.

The women's 57K bronze medals were won by American Marti Malloy and Automne Pavia of France. Alin George Moldoveanu won the 10-meter air rifle equaled the Olympic qualifying record and collected the gold medal at the London Games on Monday, making up for his narrow miss at Beijing four years ago.

The Romanian shooter missed a medal in the same event in 2008 by 2 millimeters. He blocked that out of his mind in London.

"I just went into it and tried to do my best like I do every time," Moldoveanu said. "I was calm, I did not feel pressure, because I did not know where I was. Now I am overwhelmed. It's crazy."

Moldoveanu and top-ranked Niccolo Campriani of Italy shot 599 in qualifying to equal the Olympic record by Zhu Qinan in 2004. Zhu, who went on to win the 2004 gold and 2008 silver, qualified 10th, missing the eight-man final by a point.

In the final, Moldoveanu was just a little more consistent, scoring 103.1 to Campriani's 102.5.