Sign in  |  Create a Rediffmail account
Rediff.com  » Sports » My goal is a podium finish for India in Rio: Nobbs 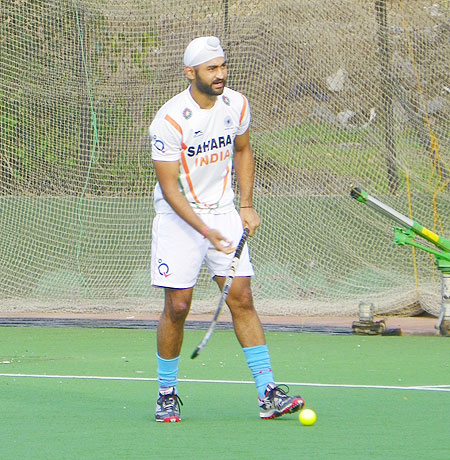 With a young Indian team managing an impressive fourth-place finish in the Champions Trophy, hockey coach Michael Nobbs has dropped hints that seniors like Sandeep Singh could be on their way out as he is looking to build a side for the 2016 Olympics.

Ace drag-flicker Sandeep and non-performing seniors of the likes of Tushar Khandekar, Shivendra Singh and former captain Bharat Chetri were left out of the squad for the Champions Trophy, where the Sardar Singh-led India, playing in the event after six long years, managed to qualify for the semi-finals.

Asked about the fate of the seniors following their axe for the upcoming Asian Champions Trophy in Doha, Nobbs said hard work and performance are the only criteria for getting selected in the national team.

"They (seniors) will have to work hard to get back their places and the longer these youngsters keep on performing the harder it will be for them," Nobbs said.

"Everybody who is picked is picked on the merit of their performance. But it doesn't mean the senior are missing out, it means they have to work harder.

"We wanted to build up the base. If you look at the Australians, Germans they have very big base. We are looking for a team in Rio in four years time. The question we have to ask is that by picking a player now will he be available for Rio?" he asked.

"Will he be good enough in four years time or will he be old? Keeping that in mind, the selectors decided that we will pick and build a team for the future. I am happy with the competition but I would like to have more players competing for positions," he insisted.
Tags: Michael Nobbs , Rio , Shivendra Singh , Bharat Chetri , Khandekar

'India should be proud of this young team' 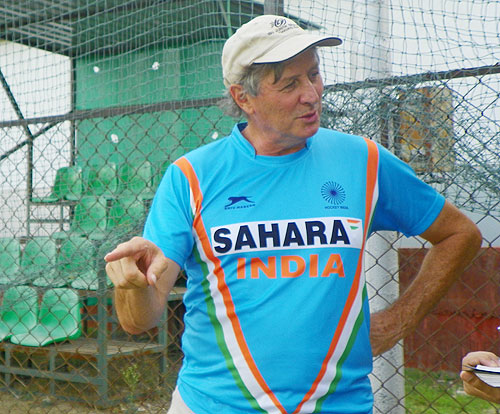 Even though he was disappointed not to have returned with a medal from Melbourne, Nobbs said the fact that two Asian teams qualified for the last four of the Champions Trophy is a good sign for the game.

"I am disappointed because I want to win everything, every game, every championship but all of these require great deal of hard work and little bit of luck. Two Asian teams in the semi-final of Champions Trophy means world hockey will start noticing the fact that we are starting to come back again now," he said.

The Australian was full of praise for his young team and handpicked a few players including inspirational captain Sardar Singh, who according to him was exceptional in the Champions Trophy.

"It was an excellent effort by a young team. They tried really hard. The young players showed their determination to play hockey for India. Sardar is our most capped player with 150 and everybody else is around 10-20. So it is a very young team.

"Just results would tell you that they just wanted to play hockey. I am really proud of them and India should be proud of them," he said.

"They were led fantastically by Sardar Singh. He has been picked as the top five players in the world but probably he is presently number two in the world. He is a fantastic player and leads by example on the field," the soft-spoken coach said.

'My long-term goal is a podium in Rio' 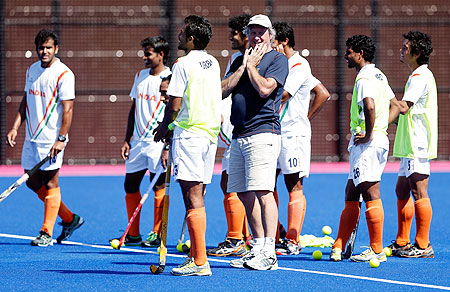 "Raghu (V R Raghunath) is a tough uncompromising defender and now is the vice-captain. Rupinder, as he is not in the shadow of any of the senior players, stood up and started to play really tough hockey. Birendra Lakra, Kothajit (Singh) and Manpreet (Singh) were all excellent," Nobbs said.

"The defence played superbly. At 34, (goalkeeper) PT Rao was excellent. I thought we might struggle after P R Sreejesh's injury as he was playing brilliantly but Rao did not let us feel that vacuum at any point of time," he said.

"We spent a lot of time on our defensive aspects after the London Olympics and try and emulate what Germany does in defence and that certainly helped but at the same time I didn't want to kill our attacking flair," Nobbs added.

Talk about his long-term goal and Nobbs was quick to reply: "Rio".

"My long-term goal is a podium in Rio and that's what we are aiming for. But the short-term goal is the Hockey India League where I want to see how Indian players play against some of the best in international hockey. It's a selection process as well for the world league coming up in next December," he said.
Tags: Nobbs , V R Raghunath , Hockey India League , Birendra Lakra , R Sreejesh
More
© Copyright 2022 PTI. All rights reserved. Republication or redistribution of PTI content, including by framing or similar means, is expressly prohibited without the prior written consent.
Write a
Comment
Print this
article