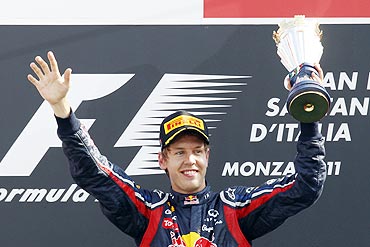 Red Bull's Sebastian Vettel had his second successive Formula One world championship almost wrapped up after winning the Italian Grand Prix on Sunday.

The 24-year-old German, who had started on pole position for the 10th time in 13 races, stretched his overall lead to a mighty 112 points after Australian team mate and closest rival Mark Webber crashed out.

With only 150 points remaining to be won from the last six grands prix, Vettel has now won eight races this season and can clinch the title at the next one in Singapore on September 25.

McLaren's Jenson Button finished runner-up for the third season in a row at Monza with Ferrari's Fernando Alonso, last year's winner from pole, giving the sea of red-shirted fans something to cheer about with third place at his team's home race. 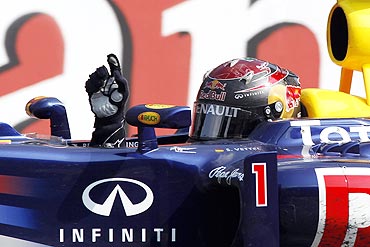 Vettel, who took his first Formula One win at Monza with Red Bull's Italian-based sister team Toro Rosso on 2008, let all the emotions flood out on his return to the podium. He now has 284 points to double world champion Alonso's 172 and Button's 167.

"When you stand up there you feel so blessed," said Vettel who slowed and swerved across to the pit wall with one finger raised as he crossed the line.

"Obviously the first one was very special but to be back here...incredible," he gasped. "I really had a very, very good race car and a fantastic day today. It's the best podium in the world. The only thing that could make it better is probably wearing a red suit," the champion added.

On a sweltering afternoon in the royal park near Milan, Alonso had the home fans leaping in excitement at the start by seizing the lead, roaring past Vettel with one wheel on the grass, from fourth place on the grid.

The Spaniard held his advantage for the first four laps thanks to the safety car, which had to be deployed immediately after Italian Vitantonio Liuzzi lost control of his HRT, skidding across a corner and slamming into Vitaly Petrov's Renault.

Germany's Nico Rosberg was also caught in the mayhem, retiring his Mercedes on the spot.

Schumacher, Hamilton battle it out 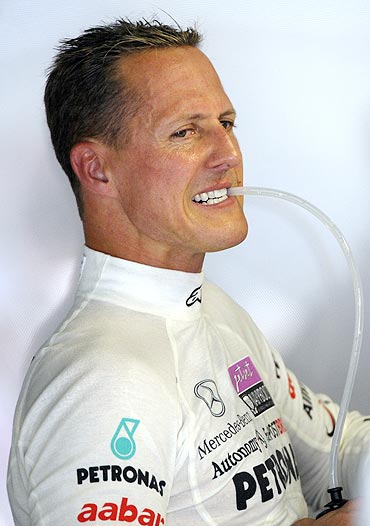 McLaren's Lewis Hamilton finished fourth after a thrilling battle with the old master Michael Schumacher, a five-times winner at Monza in his glory days with Ferrari, and then striving in vain to catch Alonso over the closing laps.

Schumacher gave no quarter, his defensive driving prompting a frustrated Hamilton to question whether the seven-times champion's moves were legal.

That triggered a veiled warning from Mercedes team boss Ross Brawn to Schumacher, reminding him to leave enough space at the Ascari chicane.

While Hamilton and Schumacher tussled, Button caught them both napping and passed in quick succession.

"I don't know if we could have challenged Sebastian today... it's a pity we had such a poor start," said Button, who qualified third but was sixth at the end of the first lap.

Schumacher, with plenty of fans in the throng of flag-waving tifosi flooding onto the finish straight for the podium celebrations, finished fifth ahead of former Ferrari team mate Felipe Massa.

Massa was the last unlapped driver on a day when only 15 of the 24 starters finished at the fastest circuit on the calendar. 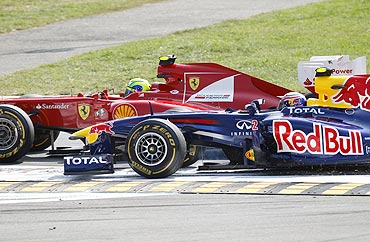 Reigning champion Vettel, who had a 92 point lead with seven races remaining before the start at Monza, was leading the race after eight of the 53 laps and on course to extend his lead considerably.

Webber, who has yet to win a race this season, and Ferrari's Felipe Massa had collided on lap five with the Australian losing his car's front wing.

The Red Bull then careered across the gravel trap and into the tyre wall at Parabolica before he could get back to the garage for a new wing.