US fans catch soccer fever, but team slumps to defeat 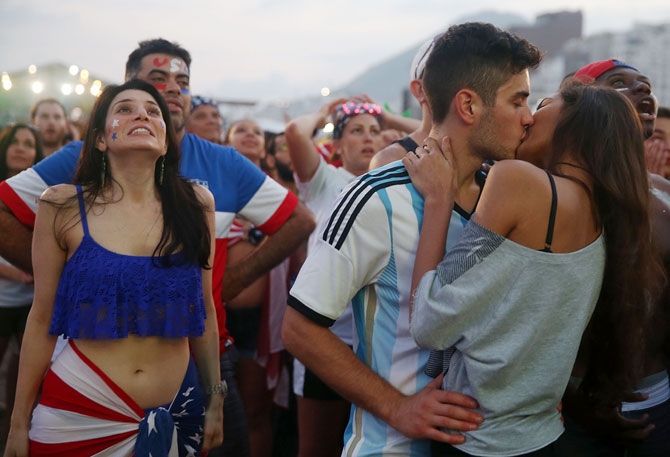 American soccer fans decked out in red, white and blue flocked to stadiums and giant TV screens on Tuesday to see their team knocked out of the World Cup by Belgium in a heart-breaking game.

Strong performances by the U.S. team in Brazil had ignited passions in a country not known for its love of soccer, and free viewing parties were held from coast to coast while fans crammed into sports bars and restaurants.

The Belgians scored twice in extra time and looked to have the game put away when the underdog Americans scored a late goal. But time ran out and the U.S. squad lost 2-1.

"All in all, Belgium deserved the win, but I'm pissed as hell," said Christina Psomopoulos, 17, a high school student who watched the match in New York's Bryant Park with two American flags painted on her face.

'I've waited my whole life for this moment' 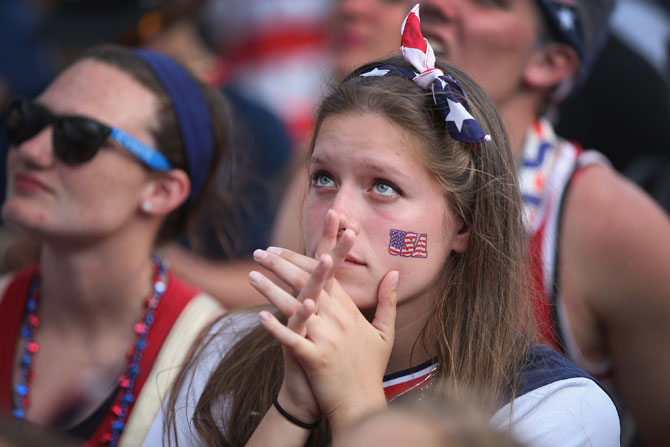 Showing the spread of World Cup fever in areas more often obsessed with a different sort of football, some 2,000 fans had lined up an hour early at the home of the NFL's Dallas Cowboys - the AT&T Stadium in Arlington, Texas - to watch on one of the biggest video screens in the world.

A massive crowd wearing the colors of the American flag chanted "U-S-A! U-S-A!" throughout the game, but to no avail.

More than 10,000 also attended at Soldier Field, home of the Chicago Bears, and many of them warmed up for the game at tailgate parties in the stadium's parking lot.

Karl Epson, 25, and his girlfriend, Becky Oliver, 23, drove a couple of hours from the Bloomington, Illinois, area because they said they wanted to be part of history.

"I've waited my whole life for this moment. It's so awesome to finally be here," said Epson, wearing a U.S. team jersey.

'People start to fall in love with soccer' 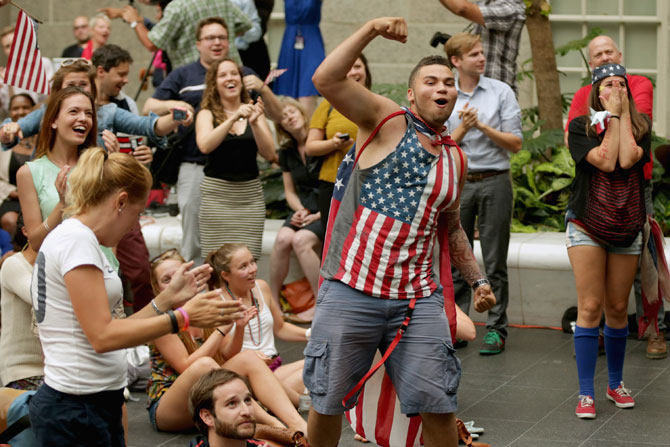 Image: Fans react after watching the U.S. score it's only goal in a World Cup loss to Belgium
Photographs: Chip Somodevilla/Getty Images

Seattle Sounder midfielder Brad Evans said the game had been a test of wills and that the U.S. team showed great talent.

"People start to fall in love with soccer when they learn the nuances," Evans said. "It's all about getting the casual fan to come out here and hang out, to feel the vibe."

Judi McRae, a Seattle area teacher, said Tuesday's loss was grueling but that it had been an amazing experience to watch. 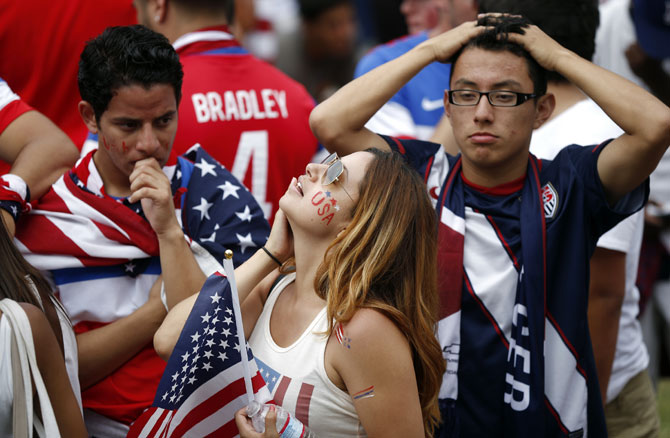 I wish we won, but I think that the fact the U.S. got so far is going to be great for the soccer community," she said. President Barack Obama had led a Team USA cheer squad that included America's biggest sports stars and celebrities. Tuesday's winners Belgium now advance to face Argentina in the quarter-finals on Saturday.

It could have been all so different: U.S. substitute Chris Wondolowski missed a glorious chance in the dying seconds of normal time to seal victory. Fans around the country held their heads in their hands in shared agony.

At the packed Campus Lounge bar in Denver, everyone stood up for the U.S. national anthem before kick-off.

"I've seen a lot of sports events in a lot of places, and I've never seen anything like that," said owner and former Chicago Blackhawks ice hockey player Jim Wiste. "It's good for the community."