Mumbai Marines rallied from a goal in arrears to beat Karnataka Lions 2-1 in a round-robin match of the inaugural World Series Hockey in Bangalore on Thursday night.

Len Aiyappa (17th minute) gave the Karnataka side the lead, beautifully converting a penalty-corner in the final minute of the first quarter.

After a barren second quarter, Devender Walmiki restored parity for the Marines in the 42nd minute and then Joga Singh (57th) scored the all-important winner for the Mumbai side in the final quarter of the match.

Karnataka Lions now travel to Chennai to face Chennai Cheetahs in their next match on Saturday, while Mumbai Marines will host Delhi Wizards on Sunday.

In another match, Chandigarh Comets registered their second win in the tournament, defeating Sher-e-Punjab 3-1.

The Comets scored their first goal as early as in the second minute through Gurjinder Singh, who converted a penalty-corner. Sukhwinder Singh Gabbar then doubled the scoreline for the hosts in the ninth minute of the first quarter.

Despite Punjab having the likes of former India stars Prabhjot Singh, Deepak Thakur and Gagan Ajit Singh in their side, it was the Comets who held the upper hand.

Matthew Hotchkis was Punjab's lone goal scorer, in the seventh minute of the last quarter.

Gurjinder was again in the thick of action in the 12th minute of the fourth and last quarter scoring another via a penalty-corner.

In the last quarter, Hotchkis's goa,l which he scored by deflecting a pass from Prabdeep, was overruled by the video umpire.

Chandigarh goalkeeper Harjot Singh had a good match and even saved a penalty-stroke in the second quarter.

The Chandigarh Comets had earlier lost to Bhopal Badshahs, Chennai Cheetahs and Karnataka Lions, while registering their first win against Mumbai Marines. 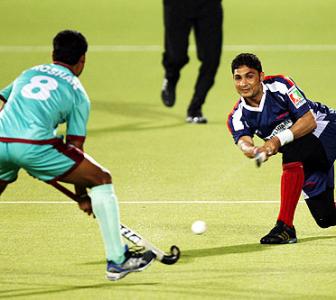 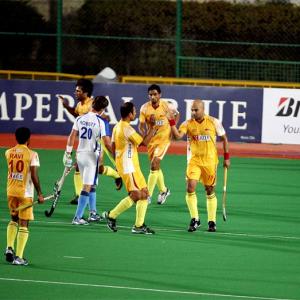 WSH PHOTOS: Aiyappa does the 'trick' for Karnataka Lions