World Chess: Harika fights back to takes semis to tiebreaker 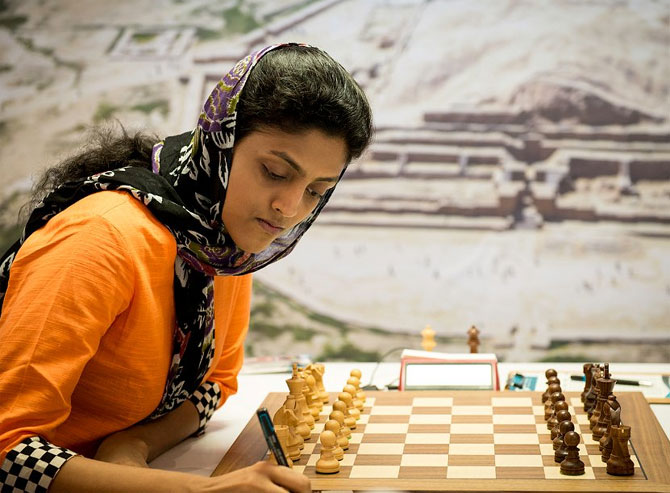 Indian Grandmaster Harika Dronavalli staged a great comeback in the FIDE World Women's Chess Championship in Tehran, winning the second game against Tan Zhongyi of China to take the semi-final into a tie-breaker.

The painful loss in the first game of the semi-final might have pegged back most of the chess players but Harika proved she is made of sterner stuff as she fought back with vengeance to take the match to a tie-breaker.

The Indian has been involved in every single tie-breaker of the championship thus far and has won all her matches in tie-break games only.

That said, Zhongyi has also shown herself to be well prepared and it will be a contest to watch.

The other second game of the semi-final saw Alexandra Kosteniuk of Russia bowing out of the US$ 450000 Championship after she lost her second straight game against Anna Muzychuk of Ukraine. Kosteniuk, who had spoiled a clear winning position in the first game was not quite up to it and lost in about 90 minutes posing little challenge.

with a Sicilian defense and Harika went for the Rossolimo variation. The position that arose was akin to the Ruy Lopez structure, and evidently, Zhongyi appeared to be at sea in the strategical complexities.

For Harika, it was a job well done that should have been finished sooner. After pocketing a pawn and strategically outplaying the Chinese, Harika missed a forced mate when the queens were still on board.

After the trade of queens there were some chances but Harika remained absolutely focussed and won a piece with some exquisite manoeuvres.

Zhongyi decided to test Harika by giving up a second a piece and the players were down to a Knight and Bishops vs lone King endgame wherein Harika clearly struggled to remember the easiest path to victory.

The tension mounted with each move as one needs to checkmate in 50 moves once the last piece or pawn has changed hands. Harika finally managed to win after 45 moves, just five moves away from being knocked out. The longest game of the championship lasted 162 moves.