Former champions and Indian veterans Leander Paes and Mahesh Bhupathi blew away a strong start to make a shock exit from the men's doubles event of the Wimbledon championships after a second round 6-2, 3-6, 7-6 (1), 4-6 loss to Arnaud Clement and Lukas Dlouhy in London on Saturday.

The third seed 'Indian Express' pair dominated the opening set but allowed their unseeded rivals to make a strong comeback. 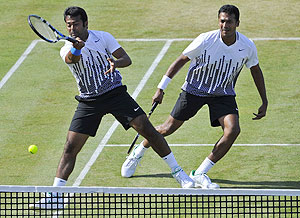 The defeat means that Paes and Bhupathi will now try to win their first Grand Slam together after rejoining forces at US Open, the last tennis major of the season.

The French-Czech pair broke the Indians twice -- third and ninth games -- in the second set to draw parity and then nosed ahead by winning the third set via tie-breaker.

The fourth set could not have started on a worse note for the Indians as they dropped serve in the very first game.

That mini lead was enough for Clement and Dlouhy, a former partner of Paes, and it provided further impetus to the momentum gained by them and they closed it out easily.

The defeat of Paes and Bhupathi leaves Somdev Devvarman the only Indian in the men's doubles draw. Somdev, along with Japanese Kei Nishikori, has already moved to the second round.

Rohan Bopanna and Pakistani partner Aisam-ul-haq Quershi have also crashed out of the championship.