He is a legend of Indian sport; the country's first authentic world champion in any sport.

Today, he lies prone on a sick bed, alone and desolate, completely off the radar as far as officialdom is concerned. And when he speaks, it is to wonder: what did I do wrong? Did I not represent my country to the best of my ability? Did I not fly the flag proudly? So why, today, am I forgotten?

He will never get an answer -- unless it is that India, as a country, has a history of treating its former greats with such contempt. 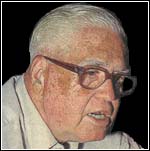 Legendary billiards champion Wilson Jones was admitted to Bhatia Hospital in Mumbai, on April 2, following a stroke. For days, he lay there, a neglected, forlorn figure with only wife Peggy and son Jeff to care for him. It was only following a story on his plight in a national newspaper that friends, and former colleagues, began stopping by the hospital, doing what they could to help.

Jones's family wonders -- would the authorities have behaved in this callous fashion if a cricketer was lying in that hospital bed? They think not -- and this fact that sports other than cricket are treated with such callousness pains them more than the great billiardier's ailments.

Jones was India's national champion in billiards and snooker, winning those titles ten and five times respectively. More to the point, when India, following its Independence was looking for heroes who could make their mark -- and thus, that of the fledgling nation -- on the world stage, Jones put his hand up.

He represented India eight times in the World Championships, winning twice (1958 and 1964) and claiming the world record for eight century breaks in a two-hour session.

He was invited, along with Tom Cleary (World amateur billiards champion in 1954) to play exhibitions in Buckingham Palace in 1951.

More than his awards, however, Jones deserves to be remembered for his services to the sport -- in fact, if cue sport in India has produced world beaters of the order of Michael Ferreira to the Agarwal brothers, the late Shyam Shroff, Geet Sethi, Ashok Sandilya and Devender Joshi, the credit goes to Jones as the flag bearer.

Till just a few years ago, he used to coach aspirants for a mere Rs 100 per session -- Jones never cared to parlay his fame into money. "He was a glutton for hard work, and could spot a talented billiards player merely from the positioning of his cue arm," say his contemporaries.

Of late, the silver lining in the cloud of official apathy has been the fact that many have stepped forward to help the legendary cueist, in a private capacity. Some contributed towards his hospital expenses, others dropped by to sit with the ailing man and give him moral support.

General secretary of the Bharatiya Janata Party Pramod Mahajan directed the treasurer of the Maharashtra BJP unit, Pratap Ashar, to hand over a token amount of Rs 20,000.

Nusli Padamjee, Wilson's former mate at St Vincent High School, Pune, sent across Rs 10,000. Subhash Agarwal, eldest of the Agarwal brothers, contributed Rs 25,000 and promised to get the ball rolling at various clubs and organizations. Secretary of the Billiards and Snooker Players Association of India (BSPAI) and Asian Billiards champion Devendra Joshi, and BSPAI vice-president Ghulam Vahanwati, handed over a check of Rs 20,000.

Even as the state governing body, the Billiards and Snooker Association of Maharashtra (BSAM), was contemplating its plan of action, the national body, the Billiards Snooker Federation of India, announced aid of Rs 21,000. The Delhi state body chipped in with a donation of Rs 11,000.

Cricket legend and chairman of the recently-formed Hero Honda Sports Academy Kapil Dev paid a visit to the former champion, and has promised to generate help.

At no point did Jones ask for help -- thus, even as he mourns official apathy, the ex-world champion is glad of the spontaneous outpouring of public affection.

Jones is, in fact, merely one case in point -- Indian athletes and sportsmen of the past are a sadly neglected lot. For instance, Sylvanus Dung Dung, former Moscow Olympic hockey gold medalist, is reduced to contemplating the sale of his medals to meet his daily expenses.

"Occasional bouts of depression due to poverty may one day force me to auction my heart and soul (the Olympic hockey gold and other medals)," Dung Dung, one of the architects of India's 4-3 win against Spain in the 1980 Olympic final, had said in an interview.

"I get Rs 500 as pension, with which I have to feed seven people," he said. "Life is becoming more unbearable by the day."

Such instances force us to ask the question: If we do not respect our own achievements, and achievers, who will? And if today's youth see this sad picture of the plight of former greats, what incentive can there be to take to sport, to bring laurels to the country?

Those desirous of contributing towards the Wilson Jones fund may send their checks, drawn in favor of Wilson Jones, directly to Wilson Jones, Sportsfield, Worli Seaface, Mumbai - 400025. Or contact: 24947753.